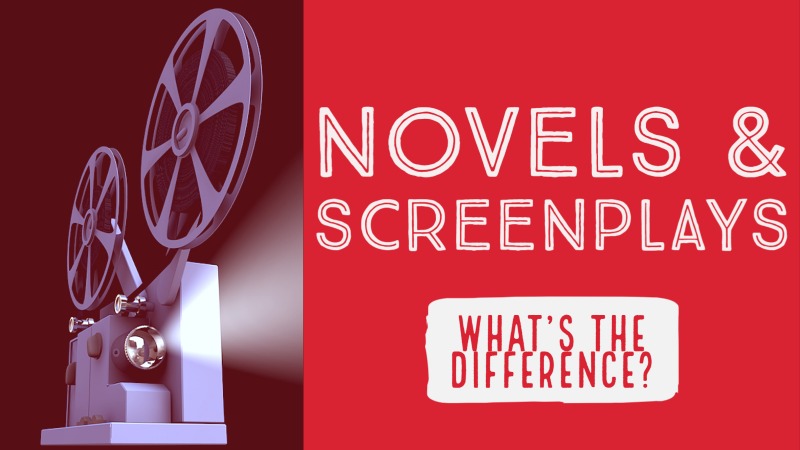 In this post, we look at the differences between novels and screenplays. We look at collaboration, costs, and choices, and we answer your question: Should I write for the screen or the page?

First, let’s start with what these mediums have in common. Both are concerned with storytelling and both entertain us. But how they tell a story is quite different. Crucially, the way these two mediums is written is different.

Another way to simplify the distinction is to think of it like this:

The novel is written for the theatre of the mind.  The screenplay is written as a visual outline and is really a form of shorthand.

Stripped to its most basic elements, it is a document for the director, producer, and actors. If we go one step further, it is a point of reference for the costume designer, director, and production designer. These talented people build out the world of the story. Composers will also add in music and sound to the mix.

Of course, a line producer will also strip it down to determine how much the screenplay will cost to film.

Costs Of Screenplays Versus Novels

As you can tell from the above, making a movie or TV series is a costly business. Even a relatively low-budget TV movie can cost up to 2.5 to 3 million dollars to complete.

So, while it may just take a couple of weeks to write, to realise a screenplay on the screen demands a major investment. It is probably the reason why fewer films are released than books. The cost is simply too prohibitive.

Producing a novel is, of course, not without costs. There are editors working on your manuscript, graphic designers creating cover art, PR agents promoting it, not to mention the costs incurred to ship it to bookstores around the world.

But, compared to the cost of making a movie, these costs are significantly lower.

How Much Collaboration Happens In A Screenplay Versus A Novel?

Movies, by their very nature, are collaborative projects. They bring together multiple talents and skills to bring a single story to the screen.

You only have to look at the credits scrolling at the end of a feature film to grasp just how many people are involved in its production.

While novels can be collaborative, specialised editorial and marketing skills are usually only brought in once the author has completed the manuscript.

How Are Screenplays & Novels Written?

Perhaps the most important distinction between these two creative disciplines is how they are written.

The screenplay is a specific document with a specific format and comes with its own conventions and common screen language.

It must conform to its conventions because so many different people must read it and interpret it correctly.

As mentioned before, the screenplay is a blueprint rather than a complete product. It sketches the story in broad outlines but with enough detail to be able to convey the mood, the characters, and the plot in a coherent way. It is told through screen or visual descriptions, action, and dialogue.

Often, new writers will say, ‘I’ll just write a screenplay because it is shorter and will take me less time.’

This is not necessarily true, because it takes time to write something that is lean, tight, and complete.

To be able to write with such economy and still retain the essence of the story is a skill. To write something in 90 to 120 pages means mastery of the craft of reduction and rewriting. Sometimes screenplays take as long as a novel to complete.

True, the experienced screenwriter can take as little as three months to write a script, but you can safely bet that their first attempts were not churned out with such efficiency.

The novel, on the other hand, has fewer formal restrictions. Its very form encourages experiments in form, structure, and length.

There are fewer restrictions that tether the novel to the limitations of film. As a writer of fiction, you don’t have to worry about budgets or temperamental lead actors.

You can create vast kingdoms, you can give your billionaire villain a hundred classic cars on his estate, and your character’s beauty is only limited to your skill at description.

Of course, this is a clue to one of the most seminal differences between the two creative formats.

In a novel, you can’t rely on a charismatic actor to bring a cardboard character to life. That complex, dynamic, and fascinating character must be on the pages of your novel.

In a novel, you can’t depend on good photography to capture the atmosphere of a big city on a hot summer night. That description must be threaded into your narrative.

And in a novel, you can’t rely on a script or dialogue ‘doctor’ sitting in a campervan on a movie set to fix any clunky dialogue. You must carry over the authentic voices of your characters on the page.

In short, in a novel the author is the puppet master and controls everything and decides everything. The work stems from one imagination and a singular vision. The success of the story will hinge on the style, the plot, and the characters.

Should You Write A Novel Or A Screenplay?

This is a tricky one to answer. It’s a true that a novelist can write a screenplay and many authors adapt their own stories for the screen.

Others are adept at both artistic disciplines.

Which One Should I Write As A Writer Starting Out?

The short, and probably ambitious, answer is to do both – or at least try both.

If you have a love for movies and TV shows–if you got up early on Saturdays as a kid to watch cartoons, or stay awake late to binge watch the newest Netflix series–then this is probably the direction you would naturally gravitate towards

And if you have an affinity for visual storytelling – if you see your stories in your imagination rather than hear their rhythms or sense their metaphors – then you would probably be good at writing for the screen.

If you are the type of the writer who gets fuelled by reading and feel a sympathy with the lives of your favourite novelists, then prose is probably better suited to your talents.

If you are starting out and unsure of the direction to take, try this simple exercise.

The screenwriter, Ron Bass says in The 101 Habits of Highly Successful Screenwriters: ‘By being a screenwriter, you are choosing to be in a medium that is genuinely collaborative, but one in which you do not have the final vote.’

William Goldman echoes this in his memoir Adventures in the Screen Trade: ‘You do not, except in rare, rare exceptions, get critical recognition. But you do get paid.’

A friend of mine, who is a director, often sums up the different mediums like this: the stage is the actor’s medium, the novel is the writer’s medium and film is the director’s medium.

In other words, when it comes to the world of film and television, the writer is very seldom, if ever, going to the ‘star’ of the show. But as William Goldman says – you do get paid.