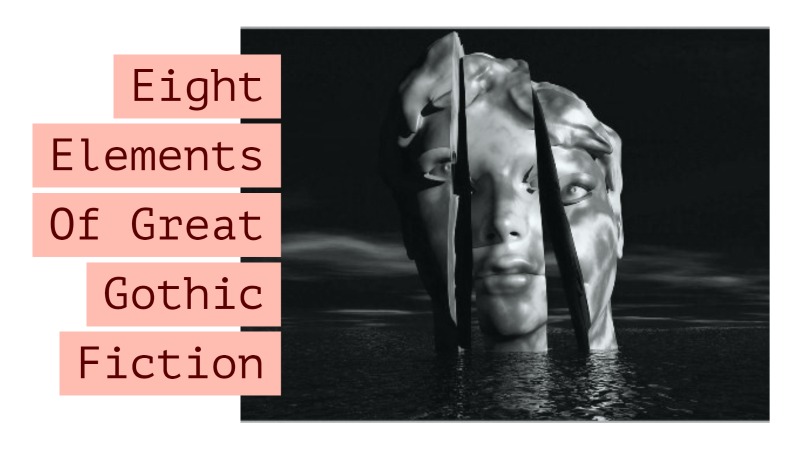 In this post, Writers Write explores the elements of Gothic fiction.

‘Gothic fiction’ was first coined in 1764, with The Castle Of Otranto.

Settings, characters, and times are always eerie. Atmosphere is everything. A Gothic story is about haunting, but not always about ghosts.

Here are the elements of great Gothic fiction.

What Is Gothic Fiction?

Gothic atmosphere is dark and tense. People and places are always haunted, or unsettled. A Gothic story might have ghosts, but not always. Haunting can be implied. People or places can also be haunted by memories, timelines, or things.

Gothic is easy to identify, and challenging (but fun) to write.

The Gothic genre is named for the architectural style. Castles, cathedrals, and mansions are a Gothic fiction staple. It uses graveyards, churches, and abandoned places.

Setting is used to unsettle. Buildings themselves can be scary. It can be bold, but also small. Gothic locations are the places where you don’t want to be alone (in the dark).

Gothic work weighs the past against the present. Regret, consequences, scandals. Guilt, grieving, or deceit. Emotion is used to build tension – to haunt.

The past can impact the present. Gothic fiction always plays with this simple rule.

A haunting is more than ghouls and ghosts. What else haunts the characters or scenes?

The Picture Of Dorian Gray is one example: the character’s sins scar his painting, but with consequences.

Needful Things is one more. Store visitors can buy their heart’s desires, but at a deadly price.

The past always comes back, in most Gothic stories.

Stories are creepy, and not just all jump scares. Implied fear, and terror that builds with a slow arc… That is Gothic.

Wait until complete darkness, and close your eyes. Let your mind run, and wander into it.

The feeling that hits your neck, with goose bumps, and unidentified fear, that’s Gothic. Eerie, not scary. Subtle, and never blatant.

Oliver Twist and Frankenstein contain no ghosts, but are called Gothic tales.

Imagine a horror theme song. Picture the part before the jump scare, before any peak, where it builds up. Slowly… Slowly…

Gothic stories use tension and anticipation.

Anticipation is powerful. Fear is important. A great Gothic story unsettles the reader, and in the most subtle ways. You don’t grab the reader and shake them, but whisper into their ear.

Psycho was a book first, and heavily inspired by Gothic tales.

Tension, for most of it, builds up with a careful pace. Most Gothic work does this.

Gothic stories are not always supernatural, but they can be. Creatures are often found in Gothic work.

Interview With A Vampire, Dracula, and The Mummy illustrate traditional Gothic creatures. Sleepy Hollow and The Strange Case Of Dr Jekyll & Mr Hyde used it too.

The popular story Twilight is, increasingly, seen as Gothic too.

Gothic work lets the past impact the future.

A Gothic story uses decline and decay like overgrowth, abandonment, ruin, and age.

All great things degrade. Gothic fiction uses it as an eerie foreshadowing, or reminder of the past.

The Shining used the old, closed hotel. The Phantom Of The Opera used an empty opera house. The Picture Of Dorian Gray used art.

Pop culture are things ‘big at the time’. Art, music, architecture, and poetry make appearances in some Gothic work.

Like buildings, pop culture is frozen in time (and can be quite haunting, too).

The Gothic genre can be divided into specific, separate subs.

Where does your next idea fit?

In this post, Writers Write explored elements of great Gothic fiction. I hope that our post helps you write your next Gothic story.