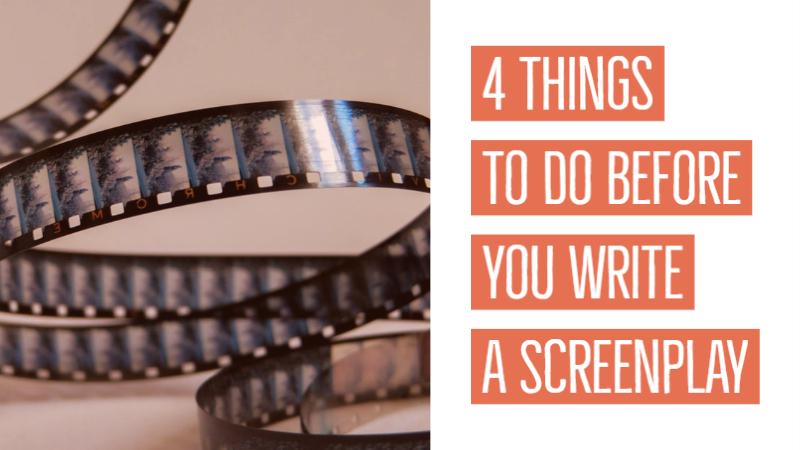 We look at the preliminary stages of the creative process for screenwriting. We’ve included four things to do before you write a single word of your screenplay.

For most of us, the creative process often seems like a mystery. It doesn’t have to be.

In his book, The 101 Habits of Highly Successful Screenwriters, Karl Iglesias, a US screenwriting teacher and consultant, outlines the four stages of the process.

You could see this as a loose guide to the art of inventing stories for the small or big screen. For many screenwriters, the four steps take some of the ‘head scratching’ out of the process.

We may all have ideas that inspire us to write screenplays, but it is how you nurture and bring those ideas to life that can make a successful feature film, independent project, or TV pilot.

For this blog, I will show how the four-step process can work by using my own example for a screenplay idea.

Recently, I was watching an investigative journalism show about a man whose small company was ‘hijacked’ by a sophisticated money laundering operation. This ‘sparked’ an idea that I felt I needed to explore.

In this stage, Iglesias explains, you are ‘gathering raw materials’ for the story. It’s a period of ‘playing with an idea’ and having fun with it.

For some writers, this may include doing preliminary research and this was certainly true in the case of my idea. I wanted to find out the mechanism for money-laundering and ‘under the table’ kick-backs.

The fun part was figuring out how the character in my story would react to having their company ‘hijacked.’ I decided to make my character a woman, because it would immediately ‘fictionalise’ the TV story. I also brought in a ‘villain’ who orchestrated the elaborate scheme. He was a man who had duped her.

Would she get a journalist to help her? Would she try to kill the man behind it? Fake her own death? From the start, I knew she would have to fight back – not only because you cannot do anything with a passive character, but also to give the screenplay the energy of a thriller.

Top tip: Keep a single notebook for your story idea, rather than scraps of papers and notes. It is always helpful if your Muse only has to remember a single address for her inspirational visits.

This is the part where you get away from your idea for a while and let your subconscious take over, Iglesias advises. You let it percolate while you get on with other tasks – like laundry, a day job, or writing a short story.

I was getting frustrated with my idea because I wasn’t connecting with it on an emotional level. I had the premise of a plot – but the characters didn’t seem real. I didn’t feel there was that much at stake besides the loss a company or that the corrupt network would go undiscovered. It was disheartening.

One thing I learned was that, even during this stage, you can still make notes and free write some ideas.  I put the plot aspect aside, and just focused on the female protagonist.  This diversion worked. I built up a backstory for her that included a weak ex-husband and an adored teenage son, a home and a routine, etc.

As a female entrepreneur, she also felt she had more to prove in a male-dominated world. The loss of her company would be even more devastating.

This exercise firmed up the motivation of my lead character, but I was still stumped about how the plot would play out.

Top tip: Don’t stay stuck. If nothing is coming to you, decorate your heroine’s apartment or write about the bad guy’s weird sex life. Sometimes it’s OK to go off on a tangent.

In this stage, your story coalesces, and you start to ‘join the dots’. It is what Iglesias calls ‘the light bulb moment’.

For my thriller idea, I realised the story couldn’t stand on the bare, technical parts that the real-life story had given me. It would need a second or third idea to flesh it out.

And this is where the secondary or support characters helped build the story. I could visualise subplots that would eventually boil up into the main storyline. For example, her ex-husband had accrued massive gambling debts that would bring her into contact with underworld criminals, a connection she could possibly leverage to fight the money-laundering villain.

Her son, who has a horrible motorbike accident, made her take her focus off the company, which is why the criminal activities went undetected for so long. Now, shocked out of her complacency, she must use her wits to fight back with a strategy that is as underhanded as her enemy’s.

With these storylines supporting the main plot, the idea was starting to ‘behave’ like a story. Perhaps it had enough ‘meat’ to fill a feature-length movie.

Top tip: Recognise and celebrate when you have written something that has improved on your initial idea.  It could be something small – a nap or a walk. Mark your achievements. No one else will.

For the final stage, your analytical self takes over to see if the idea is worth pursuing, Iglesias writes. This is where you must take a long hard look at story and test its merits.

For the thriller I was developing, the story felt clichéd in many ways. I felt it was something I had already seen. It did not have a unique angle that would make it pop.

I’m sure I could have worked to make the plot work. I had already come up with a few neat ‘twists’ but when I looked at it in its entirety, it didn’t seem strong enough to stand as a thriller.

Of course, there are aspects of it I really like. I think the strong female lead works well as do the dynamics between her and other characters. I love the criminal aspects of the story, even if I believe my idea for a villain is two-dimensional.

That is not to say I will not write this as a screenplay or short novel, but it’s an idea that gets my heart beating or my pulses racing. And, ultimately, if you are not passionate about a project, why pursue it?

Top tip: Never throw out an idea completely, but don’t try to force a story that does not ‘feel right.’  You won’t bake a perfect cake every time – but the more you practice, the better you will get at it.

As Iglesias points out, the creative process is not always linear, and these are not always rules to live by. ‘Any order is valid as long as your mind is free enough to attract ideas,’ the industry insider writes.

Try these four things to do before you write a single word of your screenplay. Hopefully, it will help you.