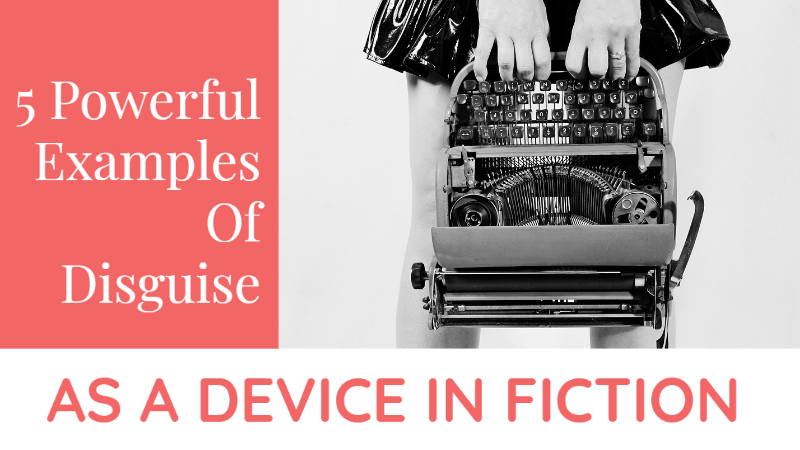 5 Powerful Examples of Disguise As A Device In Fiction

In this blog, we show you five examples of disguise as a device in fiction. The examples from classic and modern literature explain how writers have used disguise in their stories to remarkable effect.

5 Powerful Examples of Disguise As A Device In Fiction

Why Use Disguise In Your Fiction?

We all know that disguise is a common storytelling device. It can be used to express a theme, illumine a character, or drive a plot. When a character in a short story, script, or novel disguises their identity, they could be seeking a truth or revealing a deceit.

The obfuscation always has a reason that fits in with the plot or theme of the story.

As a writer, you can use this sort of clever concealment or literary trickery to subvert stereotypes or play with readers’ expectations. It is a powerful resource available to you as a writer.

It is also, I’m sure you will agree, a lot of fun to write.

While a superhero may wear a mask, he wears it as a concealment. A mask seems to ‘seal’ or close off an identity – whereas a disguise is more about taking on or absorbing another identity, sometimes more than one identity, without abandoning a core character or personality. It’s a form of character camouflage that is important to the story or a character’s inner transformation.

Recently, I was reading about Giuseppe Dosi. In the 1920s, he was possibly one of Italy’s greatest detectives, so much so that he could have easily been a fictional creation.

This former actor was a master of disguises and he used disguise as a method to solve crime. In fact, his approach became known as detectival transformation. His personas included a femme fatal, priest, banker, and a war veteran with a ‘bum’ leg. All his identities had their own fake IDs and penmanship.

Shakespeare was, of course, hands down the master of this sort of thing. In As You Like It (1598) Rosalind disguises herself as a boy called Ganymede and then, taking it one step further, pretends to be Rosalind, Orlando’s true love. Her disguise allows to ‘test’ Orlando’s love for her. This playful layering of disguise-upon-disguise is typical of Shakespeare. Nothing is as it appears on the surface.

In Charlotte Brontë’s Jane Eyre (1847), our hero Rochester dresses up as female gypsy. It transforms him from the cold and imposing lord of the manor into an exciting, mysterious stranger who is able to ask provocative questions of Jane, the elfin young tutor in his employ.

‘You are cold, you are sick, and you are silly,’ he says. He wants to tell her things he can never say as her employer. He can break the social conventions imposed on him by the period and his status.

In this classic romantic novel, disguise helps change the dynamics of the relationship between hero and heroine (it is also a nice piece of Victorian playfulness in an otherwise moody and dramatic love story).

3. Women On The Rise

In the 1920s, women in the UK and America were waking up to their power, demanding more freedom and autonomy. And often, its literature is reflective of the times.

In 1928, Virginia Woolf published the comic feminist epic, Orlando. The androgynous main character, quite improbably, lives for four-hundred years through kaleidoscopic adventures. Orlando is about two different genders in one character. It is the story of a hero who becomes a heroine, who loves both men and women.

The novel, written as a spoof biography, is less about disguise and more about the supereminence of women at the start of the twentieth century.

The story plays with identity and power. It transitions between not just genders, but time, history, and social status. Its remarkable fluidity allows the author to explore themes of gender politics and radical literary ideas in a way that a straightforward or linear narrative would not be able to embrace.

4. Disguise As A Way To Develop Character

As children, we retreat to make-believe to explore our creativity and emerging sense of identity. It’s one of the reasons we love dolls, puppets, and stories. Some people, however, don’t always grow up.

In the ’80s classic children’s story, Madame Doubtfire by Anne Fine, an actor, Daniel, dresses up as a woman and applies for the job as cleaning lady for his own kids.

It is a great frame for a story about a family dealing with the fall-out of a divorce and redefining their new roles. His ruse helps Daniel become a better man and father.

‘I have only one life and I want to live it, not act it,’ he says. The disguise in the story serve to bring that theme alive in the narrative.

Anne Rice’s novels about vampires are less about blood drinkers on the rampage and more elegant fables of our human desire and frailty.

In Interview with the Vampire

(1976), the two central characters, Louis and Lestat, are disguised as rich Southern gentlemen, and there is something of the era’s dress-up and social pantomime in their lives in New Orleans. Yet, at heart, they are ruthless killers under their elegant clothes, culture, and manners.

And in Paris, where Louis travels with the child-vampire Claudia, the theme of disguise is taken further. At the ‘Theatre of Vampires’, the two sit in an audience and watch vampires pretending to be human actors pretending to be vampires. It is almost a sly little valentine to the devices Shakespeare used on the Elizabethan stage.

Rice explores what it means to be human from an inhuman and artificial viewpoint. Her vampires are disguised as humans and therefore forced to live as humans – so being human is both a gift and curse in her imagined world. She writes: ‘The only power that exists is inside ourselves.’

You Can Harness The Power Of Disguise As A Writer

The truth is that characters wearing a disguise may be hiding, yes, but on some level, they want to discovered and exposed. As in real life, they want others to see them for who they really are – and not only see them but accept them too.

If we can tap into this, we will find the power that exists inside ourselves as writers and find the core of our characters.