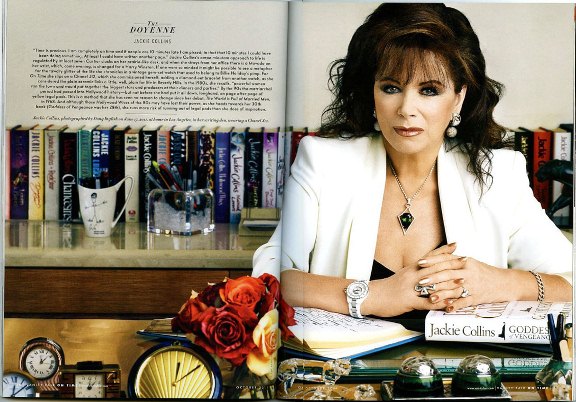 Writers Write is a comprehensive writing resource. In this post, you can read five bestselling storytelling lessons from Jackie Collins.

Jackie Collins was an English novelist, who was born 4 October 1937 and died 19 September 2015. Her books sold over 500 million copies. Eight of her novels have been adapted for the screen. Some titles are Hollywood Wives

and The World is Full of Married Men

I think millions of fans were shocked by the sudden passing of Hollywood novelist, Jackie Collins, a writer hailed as both a ‘raunchy moralist’ and ‘the Marcel Proust of Hollywood’.

While I was devastated, the first thing I did was start re-reading some of my favourite titles by this bestselling author. I realised I’d learned so many page-turning storytelling secrets from her over the last 20 years that I thought I’d share them in this blog post.

In all her books, Jackie wasn’t afraid of big stories — sometimes she went over the top, but you were willing to follow her simply because she wrote such compelling, idiosyncratic, outrageous characters. She also created some truly creepy villains — like the perverted Herbert Lincoln Jefferson in Sinners or Deke the evil twin in Hollywood Wives. She understood the value of a strong, wily antagonist in all her novels.

I guess what I learned from Jackie Collins — and perhaps the most important lesson — is to treat your writing like a fearless adventure and to have fun with the story.