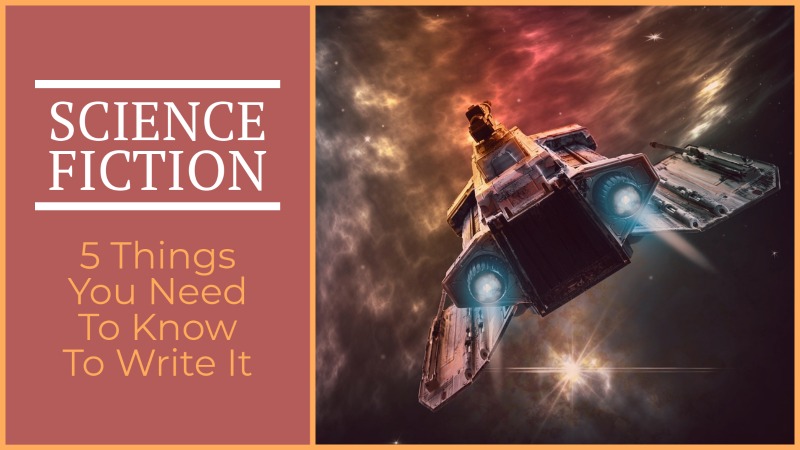 5 Things You Need To Know To Write Science Fiction

If you want to be a science fiction writer, we’ve created this post for you. Here are five things you need to know to write in the genre.

5 Things You Need To Know To Write Science Fiction

So you want to write science fiction and you want to do it “write” now! Here are five quick things to consider before you get underway.

Sci-fi is about a concept. Something novel and interesting.

This can be a problem or it can be something positive.

It might be about saving the human race because the Sun is dying, or it could be about a luxury cruise on an interstellar starship.

The core concept needs to be both captivating and fascinating so that it captures the imagination of your reader.

This covers up many other flaws. In fact, you see sci-fi writers getting away with a lot more than crime authors as a result. Obviously, you should not write badly just because you have a neat idea.

2. Your World Must Engage My Imagination.

Give me a Stargate; give me the Protomolecule; and give me a Klingon warrior that drinks prune juice (Worf).

Don’t copy Star Wars or Battlestar Galactica. Come up with your own personal and interesting dynamic for how your world works instead.

Dune is fascinating because the world is so bizarre yet real that even if it was filled with boring plots and bland characters it would still be worth reading. [Read: The Greatest Fictional World Builders: Frank Herbert]

3. Ask Yourself: Would I Be A Good Teammate At A Sci-Fi Pub Quiz?

If you don’t know who Clarke, Heinlein, and Verne are, you probably need to do more reading.

The issue with science fiction is that the community is so self-referential and close that we can spot a “genre jumper” at a glance.

We want deep, well-considered work that builds on and improves upon the ideas of the masters of sci-fi. Lately, we have seen a number of failed attempts at modifying older science fiction franchises for a general audience, and the vast majority of them have failed.

I believe this is due to a lack of awareness from the writers about what makes SF proper Science Fiction.

Sci-fi is weird and we like it that way.

It’s a smaller genre and it thrives because the oddballs and misfits of the world can find themselves in the stories this genre creates.

Most stories need you to create an “everyman” protagonist so that the general public can relate to their struggle. This also works for Star Wars and action science fiction, but ask any Star Trek fan who their favourite character is, and you won’t get Kirk or Picard.

It’s going to be Barclay or Quark or maybe Dr Phlox. Someone with a problem; someone with an abrasive personality; or someone with a different set of values respectively. Science fiction works well for these characters.

Hell, shove an Englishman in a bathrobe, give him a towel, blow up the earth, and you have a series of novels that won’t stop writing themselves even after the author dies.

5. Don’t Ignore The Elements Of A Good Story.

Just because sci-fi is different doesn’t mean you can be lazy.

Your characters must still be complex and well-written. Your plot must be tight and polished.

You should never ramble on just because you have something to say.

Tell your story with your characters. Use action and conversation with high points and low points in appropriate measure to tell a good tale.

Science Fiction gives you the permission to break the mould, but not the rules of good fiction.

If you are looking for more information on science fiction please read:

Beamed directly from the mind of Christopher Luke Dean.