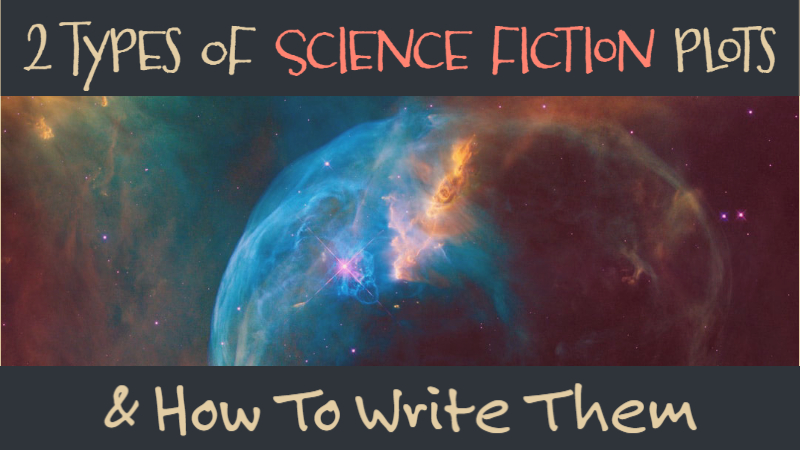 In this post, we look at the 2 types of science fiction plots and discuss how to write them.

In this article I talk about the two types of science fiction and what you should consider when you are writing them. I will talk about what they are, as well as audience reception for these sub-genre categories.

You may also want to check out these other helpful articles on writing science fiction:

The 2 Types Of Science Fiction Plots & How To Write Them

This category includes Science Fantasy series like Star Wars and dramatic Speculative Fiction like Blade Runner and The Hunger Games.

This genre is often mocked by purists as popcorn science fiction. It has lots of explosions and even more personal drama. There are wizards with Laser Swords fighting evil Space Samurai. It has “Infinity Stones” that can end all life, and technology that defies the laws of nature.

But, it is often the most enjoyable. I love Star Wars (most of the time) and Marvel and all the other wacky space operas. They are a great way to unwind and take it easy while having something pleasant to watch.

Guardians of the Galaxy is a perfect example of this feelgood style of science fiction. Getting from planet to planet is just like popping out to the shops for a bottle of space milk.

As for books in this genre, well, they are just as crazy. We see in early science fantasy works like John Carter of Mars (later also a comic book series, and then a big Hollywood movie that nobody saw). This is about an American cowboy who goes on adventures on Mars, marries a princess, defeats evil cannibals, and does very non-PC things. It was written more than one hundred years ago though, so some forgiveness is probably in order.

The various teenage sci-fi books of the nineties, and the slew of post-apocalyptic visions of the future we saw in the 2010s, fall into this genre. Animorphs and The Hunger Games stand out as dramatic, relationship-driven examples in this genre.

They don’t always work. Some movies that should be slow, intellectual science fiction become giant action-packed blockbusters. They lose something when this happens.

For example, Oblivion (2013) was a movie that had an interesting premise. Alien overlords used humans to harvest resources from earth by making them think they were saving the planet. This was ruined in large part by non-stop action sequences and bizarre casting choices that distracted from what could be an interesting story.

Andy Weir‘s The Martian is a good example of a quiet, personal, and thoughtful take on science fiction. The book was more about the science than the movie, but both convey a sense of quiet drama that allows us to invest in the characters.

How To Write Mainstream Science Fiction

The Martian book fits better here, but the movie was made for a mainstream audience.

More traditional science fiction like Star Trek is often seen as being about technology. Sometimes, this is true. We see that in 2001: a Space Odyssey, where the movie is partially about the emergence of artificial intelligence and space travel.

But most science fiction is mostly about the fiction. Sure, Arthur C. Clarke and Larry Niven make a few attempts to describe something cool with real scientific principals, but they ignore it two or three chapters in.

Clarke’s City and the Stars begins as an intellectual look into trans-humanism and what society might look like if we cured death and all other human needs. It soon devolves into a story about psychic people and crazy scientists literally inventing God and the Devil. Niven’s books become more salacious as he ages.

I’m not saying it’s boring or not worth your time, just that Science Fiction is about ideas and not science.

Star Trek is about morality and not about space ships. It asks what would happen if humans stopped hating each other.

Star Trek was a beautiful dream from the mind of a gentle soul that gave generations of people coming out of horrific wars and living under the threat of nuclear war hope for the future of humanity. Sadly, it has since devolved into teen-angst drama in its latest incarnations.

How To Write Niche Science Fiction

Niche Science Fiction has a small audience. Star Trek, the most successful of these franchises, was always about a tenth of the size of Star Wars. However, the fans of these smaller franchises were so loyal and so passionate that they were hugely profitable and they felt much bigger than they were.

Stargate was another niche science fiction universe centred around the US military using wormholes to teleport to other planets. It was never huge. It never felt like it had a large budget, but it sold toys and books, and people tuned in every week for 15 years.

You can be a very successful author of niche science fiction because of the loyalty of the fan base. Better still, you don’t need to sell your soul to a giant corporation who no doubt will want you to “punch it up” for a wider audience.

That is not to say Mainstream Science Fiction can’t be meaningful. I think the early Star Wars movies and lately, The Avengers have shown that you can have an emotionally satisfying series of movies while still appealing to almost everyone.

They just can’t be smart. There is no space for the weirdness of high concept Sci-fi like Farscape in Marvel or Star Wars (except perhaps in the spin-off novels).

Farscape was a truly remarkable series both for its creativity as well as its dedication to the genre. It was always weird and alien, but also thought-provoking and emotional. It was the best of all worlds.

Unfortunately, it seems that people don’t want a mixture of high concept and mainstream. They are very comfortable in one space or the other and that’s fine. Just bear that in mind when you write science fiction.

If you are in it for the big money, be sure to stick to the formulas used by the most successful franchises. They are well known and are proven to work.

If, however, you want to be talked about decades from now in the tones reserved for Clarke and Asimov then you might want to go off the beaten path.

by Christopher Luke Dean (Or at least his clone.)