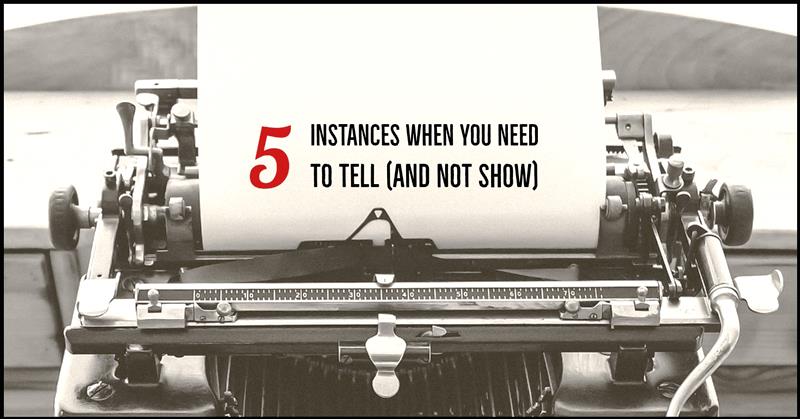 5 Instances When You Need To Tell

Writers know that to show is better than to tell. They also know that a good story includes some telling. Here are five times when it’s better to tell.

Writers know that showing is better than telling. They also know that a good story includes some telling.

Sometimes your characters need a break. They may need to think, or retreat for a moment. Time marches on and many events in a character’s life are not vital to your story. Sometimes it is better to tell your readers about these things.

Telling is sometimes called using a summary mode. It is one of the few times you get to tell the reader what happens, but it should be used sparingly. If over-used, it can be boring as it distances the reader from the viewpoint character’s goals and actions.

Try to keep telling to a few paragraphs, or in some (extremely) rare cases, a short chapter. Too much telling can lead to author intrusion.

5 Instances When You Need To Tell (And Not Show)

1. To connect scenes, introduce characters, and/or gloss over unnecessary conversations.

Sometimes you need to make your readers comfortable with a brief transition that lets them know where they are in the story. You may also have the appearance of a character and showing might be distracting. The characters might have travelled to another city or moved to a different room. Or a short period of time might have passed.

Example: ‘Jeremy waited until five minutes past eight the next morning before he marched into The Michelangelo Towers. He had spent the night obsessing about his future. Kirsten’s demands echoed in his head and he could barely think straight. He walked to the check-in counter and asked the concierge to call Room 303.’

2. To report events and/or gloss over unimportant characters.

You can tell us about the things that happened in your character’s lives that aren’t vitally important to show in the story.

For example, if your story is set in a school environment, briefly tell us how the characters spent their Christmas holidays at home. Don’t introduce us to a series of characters who have nothing to do with the main story.

3. To show that time is passing.

Books can span days or decades. We don’t need to know what happens every moment. Use telling to reveal that time has passed, seasons have changed, or people have aged to get us to the next important part of the story.

4. To focus on emotion when showing is impossible.

Sometimes a character is so isolated or immobile that we need to get into his or her emotions with telling. Bear in mind, though, that this is an old-fashioned way of writing. Madame Bovary would not be published today. Move your character back into the action of the story as soon as you can.

Sometimes a little bit of telling is necessary. When there is no other way of introducing the past, you can add it in, but remember to reveal these bits and pieces gradually. Keep this as brief as possible, and remember that you should not start a novel or a memoir with backstory.