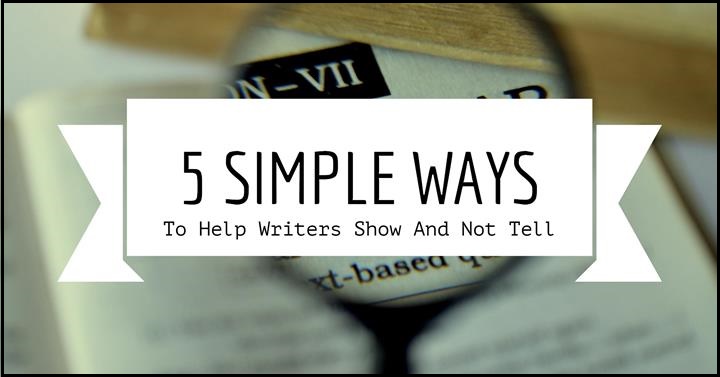 5 Incredibly Simple Ways To Help Writers Show And Not Tell

When you start writing a book, people will tell writers that they need to show and not tell. But how do we do this? We have put together these tips to help writers show and not tell when they write.

The concept, Show Don’t Tell, is one of the trickiest things for beginners to grasp. It’s something we teach on our Writers Write course, and it’s an ‘aha moment’ that can’t be rushed.

[Tip: Buy our How To Show & Not Tell Workbook to help you with this topic.]

The detective was staring at the body. He saw that it was a female and that she had been stabbed. The coroner said that she had been dead for at least five hours. The body was decomposing fast. The heat was speeding up the process. The detective’s phone rang; he looked at the screen but didn’t answer. He looked at the body hoping to find clues. Her hair was dirty and uncombed. The smell was bad. His phone rang again. He ignored the call again. The alley was dirty and smelly. They would have to move fast. The sun was already up. The detective walked over to talk to the press. They had a serial killer on their hands. This was going to be a long hot day.

Flies buzz over the corpse. The tiny black bodies frantic, jockeying for position as the coroner waves her hand.
“What have we got?” Detective Anderson steps over a puddle – a mixture of blood and drain water that doesn’t bode well for the evidence. He fishes a ringing phone out of his pocket and glances at the screen. He stuffs it back into his pocket. He nods to the coroner.
“Female, 24-28 years old, multiple stab wounds.” She moves a matted clump of dirty blonde hair out of the victim’s face. “Matches the description.”
Shit, he hates it when missing people turn up dead. Anderson pushes his sunglasses back up his nose and they slide right back down. Fucking summer.
“Liver temp puts time of death at between 1 a.m. and 3 a.m. Give or take a few. This weather isn’t helping. We are going to have to move fast.”
“Do you think it’s him?” he asks.
“I’ll need to run some tests at the lab, but it all fits. Same weapon, same MO, same everything.” Anderson tugs at his shirt and checks his phone as it rings again. Sweat drips from his brow. The air is heavy, humid, and fetid.
“What are you going to tell them?” They both look at the clamouring group of journalists.
“I am going to tell them we have a serial killer on our hands.” He strides towards the vultures and sends Sarah a text to cancel dinner.

What can we do to make sure we show and not tell? In the second example, I chose a viewpoint character, added dialogue, and used the senses. I made sure to be specific when I described what was going on in the scene. I also avoided using ‘telling’ words.

[Tip: Buy our How To Show & Not Tell Workbook to help you with this topic.]

5 Simple Ways To Help Writers Show And Not Tell

Click on each of the five links above to find out more about these ‘showing’ techniques. I have written five posts that explain each point and I have included examples to make it as clear as possible.

(Tip: Buy our How To Show & Not Tell Workbook to help you with this topic.)

[Remember that there are times when you should tell and not show. Follow the link to read more: 5 Instances When You Need To Tell (And Not Show)]

Tip: Buy our How To Show & Not Tell workbook to help you with this topic.