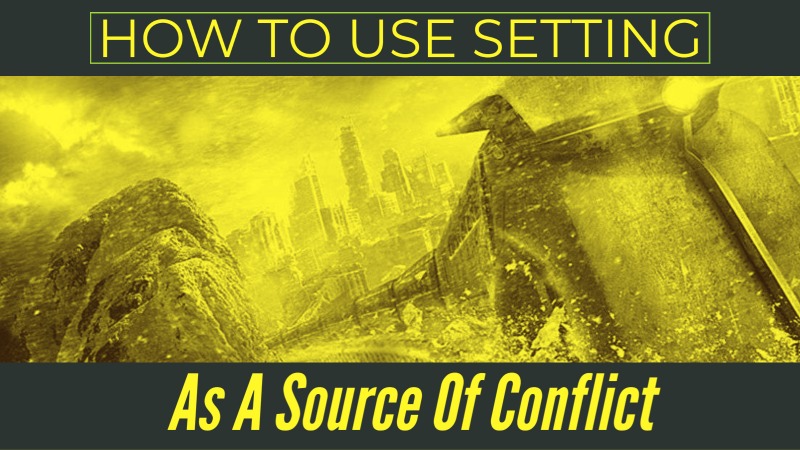 Have you thought of using a location to increase the tension in your story? In this post, we look at how to use setting as a source of conflict.

In previous posts, I spoke about conflict in stories. Conflict comes primarily from the antagonist, but also from your protagonist (inner conflict), other characters, and from the setting. Setting is a great source of conflict.

We can break setting down into different parts. Each part of the setting can be used to add to the conflict in your story.

How To Use Setting As A Source Of Conflict

1. Physical Location Of The Story

Where does your story take place? On a street, on a space station, or under the sea? What are the dangers, opportunities, or restrictions placed on your story by the location? In space, oxygen is in short supply. Your character can’t just walk out the door.

Past, present, or future? When your story is set will give you not only a timeline, but will also give you conflict that will flesh out your story and make your world more complete. What happened at that time in history? What devices were or were not available that will make it easier or harder for your character to achieve their goal.

Culture plays a big part in any story. Culture is the characteristics of a certain group of people. In which culture have you set your story? How does it influence your story? These are the ideas, customs, and social behaviours that rule your setting. Think about religion, gender, language, traditions, food, and myths that can add to your plot and make it harder for your character.

Do they have telegrams or cell phones or telepathy? What you surround your characters with and what you put at their disposal will help you tell your story, but it can also hinder your character. Objects and things will ground your story and help you convey the setting as well.

Hours, days, months, or years? Time constraints in stories are great for adding tension and conflict. Decide on the duration of your story and find a viable time limit. Is it a competition, a deadline, a curfew or a spell?

What is the weather like in your story? Floods, droughts, and tsunamis are extreme and will wreak havoc with your character’s world. The weather conditions don’t have to be that extreme though, a thunderstorm can strand two characters somewhere, a windy day can blow a letter away. How can the weather make it difficult for your characters?

Where does it take place? Sea or desert or mountains. This will influence what can happen in your story. What keeps the characters apart? What makes it hard to reach their destination? Why do they need to leave?

Let’s Look At An Example:

The second season of Snowpiercer is showing on Netflix. It’s an awesome story. Watch the trailer or the recap here.

‘Snowpiercer is set in 2021, seven years after the world becomes a frozen wasteland, and follows the remnants of humanity who have taken shelter on a perpetually moving luxury train. Designed and built by the eccentric billionaire Mr. Wilford, the train consists of 1,001 carriages and circles the globe 2.7 times per year. The constant motion of the train provides energy and prevents the passengers from freezing as well. Since the catastrophe, the train’s population has become rigidly separated by class, caught up in a revolutionary struggle against the strictly imposed social hierarchy and unbalanced allocation of limited resources. The show explores issues of class warfare, social injustice, and the politics of survival.’ Source

Now, let’s let look at how the setting creates the conflict.

The story takes place on a train called Snowpiercer built by Wilford Industries. The train is 1001 cars long. It is divided into three classes and a section called the tail. No one can get off the train and the train cannot stop.

It is a post-apocalyptic story set in 2021. Seven years ago the world froze over. The only survivors are all aboard the train.

There is a strict social hierarchy on the train. The train is divided into first, second, and third class. The first and second class passengers paid for their tickets. Third class makes up the workforce of the train. These are referred to as the ticketed passengers. The train is self-sustaining and there is enough food for these passengers, but when the train departed it was stormed. A group of unticketed people stormed and boarded the train. These are known as the Tailies. There is not enough food or resources for these passengers.

The tail is left to fend for itself. In the beginning there were cannibalistic kill gangs in the Tail. When a Tailie disobeys the rules the arm of the offender is frozen off.

On the train there is also a baby lottery, a drug problem, a black market, a serial killer, marriages, scholarships, and an uprising.

Certain passengers have access to certain parts of the train. They have been implanted with chips to navigate and move through certain sections.

There are no windows in the tail. There is also no food and no water. The Tailies must scavenge for everything.

When Layton, a Tailie is called uptrain. He finds drawers. Inside the drawers are Tailies they thought had died. These people had been placed in stasis.

The train circles the earth on its track. These are referred to as rotations. With every rotation the train and the track deteriorates. The bees have died, the cows have died. The more time passes the fewer resources are available.

This is the catalyst and a major source of conflict in Snowpiercer. The earth has frozen over. There is nothing alive outside of the train. The temperature is -119°C.

The train track was built to circle the globe. It goes over oceans and mountains and is an engineering marvel, but avalanches and snow make it dangerous.

Setting is great source of conflict that will add layers to your story. Brainstorm all the aspects of your setting. Start big, think of all the major events that could happen and then go small. Find all the little things that can upset the status quo.