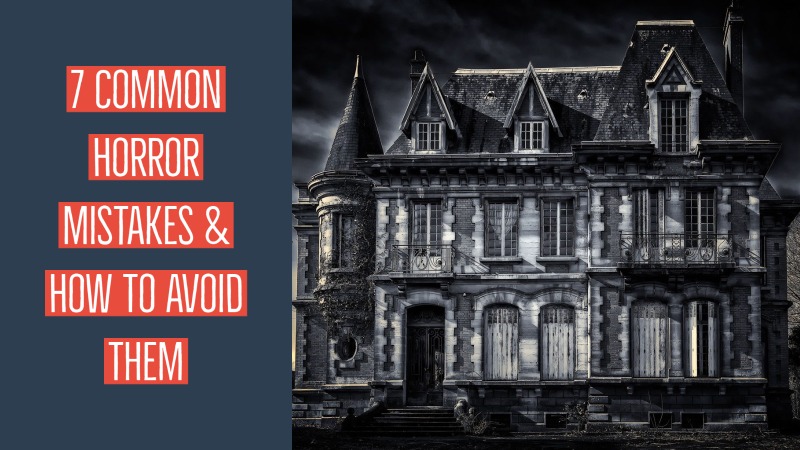 7 Common Horror Mistakes & How To Avoid Them

If you want to write scary stories, read our post on seven common horror mistakes and how to avoid them.

Horror is different in writing than it is on screen. B-Horror movies like Anaconda and The Bride Of Chucky are a lot of fun to watch. But so-called bad horror stories are no fun when they appear in print.

Do you want to write more thrilling, terrifying, or engaging horror stories? Join me as I take a look at bad horror fiction and how it happens.

Here are 7 horror fiction mistakes that writers should avoid.

7 Common Horror Mistakes & How To Avoid Them

Violence has its place in fiction, but writers should beware when using it as an element. Descriptions of violence should only exist where necessary for showing characters or moving the plot forward.

Writing guidelines will usually bar any graphic, unnecessary, or gratuitous violence. Writers will see this in the majority of mainstream and indie fiction markets.

Example: American Psycho by Bret Easton Ellis was first published in 1991. The plot tells of serial killer and investment banker Patrick Bateman. Its graphic violence and sadism have made the book impossible for many readers to finish.

Writers should use the element of dreams with extreme care.

‘It was all a dream!’ is a weak plot conclusion. A start or end with a dream sequence can make your entire plot look invalid.

Skipping between dreams and reality in your storytelling becomes confusing.

Plot twists feel like an excellent method to make a horror story more thrilling. But don’t twist the reader up in a hundred small sub-plots that spoil a good story.

A writer can reign in their crazy plot twists with the use of a detailed outline. Cliffhangers are for chapters where they can make the right impact, but not used for every scene.

Sub-plots should only get used if they add worth. Never use them to increase the story’s word count.

Example: Successful and well-known writers can make mistakes, too. The Tommyknockers is one of Stephen King’s worst stories. That’s because the author was too caught up in addiction to take note of his plot. By his own admission, King has no idea how he plotted the book. By his reader’s admission, one can tell.

Horror tropes are fun to use sometimes. It can be fun for the reader, and are as much fun for the person who is writing the story.

Can you mention any horror story elements that you’ve seen in horror fiction often? Can you name any that you would hate to see again?

Use tropes with care.

‘The butler did it,’ will work for some stories, but has the potential to ruin other ones.

Dream sequences, axe murderers, and quick jump scare scenes are all examples of tropes. Haunted mansions, poltergeists, and insanity are examples of others.

Sprinkle genre tropes like fine spice throughout your story. Tropes are dangerous because they can spoil real twists. Where’s the fun if readers can predict what’s next?

Example: Richard Laymon was a horror writer with a few notorious habits, even according to some of his fans. Too many jump scares, horror tropes, and over-the-top scenes are some of the things his readers loathe.

A perspective change tempts the horror writer often, but don’t fall for its allure. Why add a sudden scene set in the 1600s when the rest of the story happens in 2008? It gives too much away – especially if it’s a flashback that adds no tension to the plot.

The change in perspective can also feel cheap, or like cheating to the reader. A part of the horror thrill is that the reader isn’t all-knowing, and feels the story’s scary moments.

Perspective – as found in viewpoint – can also be too singular, especially if you have an unreliable narrator.

Example: Stephen King‘s novel Gerald’s Game is a good example of perspective use. Unfortunately, readers didn’t take as well to Gerald’s Game. Most of the plot happens in the main character’s head.

For fictional dialogue, remember that conversations and interaction should advance the plot – especially in horror.

Example: Borderliners by Peter Hoeg was to be a thrilling story of 1970s children who make up part of an experiment. Its execution didn’t live up to its premise. Borderliners could be one of the most awful books ever, with the plot and dialogue often referred to as mundane.

All true horror fans have seen a film where they wonder or exclaim: ‘Who would ever do this?’ It engages an audience to see people err on screen, but the same technique is painful in written horror.

Writers should imagine how a real person would react. Only then, write your character.

This is how you create relatable characters. For horror, that’s how you get under the reader’s skin.

Example: Tower of Evil by James Kisner is a book that sounds great from its title. Readers have the same issue with it. Why does the main character think that someone is playing a prank on them? It is unfortunate plot twist… For the plot!

We hope that this post will help you to create even better horror stories!

Writers Write has many resources for aspiring and professional writers improving their skills.