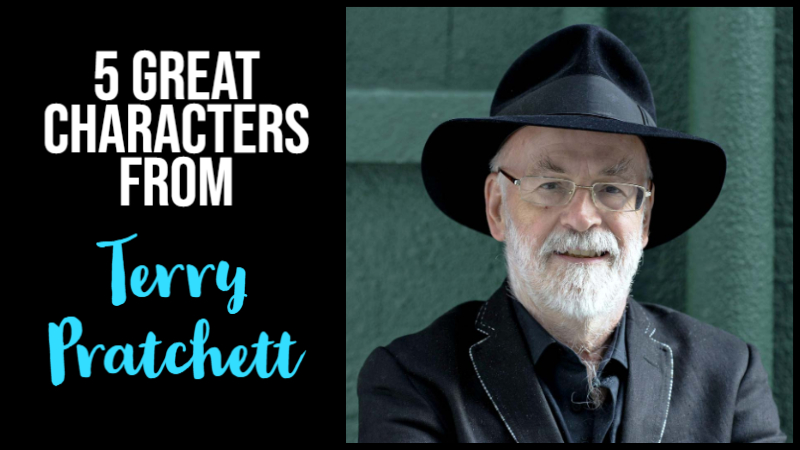 Terry Pratchett was born 28 April 1948 and died 12 March 2015. The English author of fantasy novels was awarded the World Fantasy Life Achievement Award in 2010. He wrote the Discworld series, beginning with The Colour of Magic.

He is known for his down-to-earth fantasy novels with their wonderfully over-the-top characters. These are five of the best.

Young Tiffany Aching is a witch. A down-to-earth witch with no time for people’s nonsense. She is quite busy enough saving the world from evil monsters and the evil monsters people tend to become if you let them.

Aided by a band of enthusiastic highland “pictsies”, she is an effective force for good. She lives on the chalk plains where sheep and people share about the same intelligence.

“I get up Aching, and I go to bed Aching,’ she whispered to herself, smiling. One of her father’s jokes, and she had rolled her eyes when hearing it again and again as a child, but now its warmth curled over her body.” ~The Shepherd’s Crown

Or more properly, “His Grace, His Excellency, The Duke of Ankh; Commander Sir Samuel Vimes, Ambassador and Blackboard Monitor”.

Mister Vimes, as he is known by his friends, is a man who has unwittingly found himself promoted to a position of power he could not want less.

But, while he’s there, he’s going to make life unpleasant for any of the bigwigs who think they can get away with crimes just because they have a “Lord” or “Lady” in their name.

He started his life as a beat cop cultivating chips on his shoulder against the world in general. He earned a reputation as a man who won’t let a case go until he’s got his man, woman, troll, dwarf, or being of choice.

He is the ultimate symbol of justice. He believes that if the law is not protecting the people it’s meant to protect, it’s probably not worth paying too much attention to. After all, everyone is guilty of something. You just need to figure out what.

“It was, he felt, a persistent flaw in his wife’s otherwise practical and sensible character that she believed, against all evidence, that he was a man of many talents. He knew he had hidden depths. There was nothing in them that he’d like to see float to the surface. They contained things that should be left to lie.” ~The Fifth Elephant

The job of Archchancellor was a dangerous one before Ridcully. Wizards, being naturally long-lived, tended to vie for this role in a survival of the fittest sort of way. “They say a wizard who is tired of checking for glass in his food is tired of life.”

But, due to the general vigour and seemingly unkillable nature of Mustrum Ridcully, the unseen university has become a place of peace. Fat wizards can now enjoy the after dinner cheeseboard without worrying unduly about their grad students’ ambitions.

It even has a fine Football team. Go Unseen Academicales!

Under his wise rule, wizards stopped being a source of worry for the Discworld. The colourful bunch are now seen at state events or down at the market selling magical devices like demon-powered iconographs and personal dis-organisers.

On the rare occasion that they do cause an incursion from the Dungeon Dimensions, they help clean up the mess. Well, at least the younger students are told to help.

‘It can’t be intelligent, can it?’ said the Bursar.
‘All it’s doing is moving around slowly and eating things,’ said the Dean.
‘Put a pointy hat on it and it’d be a faculty member,’ said the Archchancellor. ~Moving Pictures

Another Wizard of note, or “Wizzard” of note as it is spelt on his pointy hat, is Rincewind. Having absorbed one of the primal spells as a student, Rincewind can’t actually do any magic.

He is certainly a wizard. He knows it in his bones. However, another thing he knows is that you can always run away from a problem. And, if that causes more problems, you can run away from those too.

This has taken him all over the world and to other dimensions too. He has been to hell and back more than once. He even helped out in a Shakespearean production. He has run from monsters, hordes of elderly barbarians, and dragons. He has fallen off the edge of the world and also flown off of it. He has been to the moon and to the mountain home of the gods.

All he really wants is a plate of potatoes and his weekly double ration of coal delivered to his office, which is that of the Professor of Cruel and Unusual Geography. Nobody else is as uniquely qualified as he is.

“He’d always felt he had a right to exist as a wizard in the same way that you couldn’t do proper maths without the number 0, which wasn’t a number at all but, if it went away, would leave a lot of larger numbers looking bloody stupid.” ~Interesting Times

Every coven needs a mother, a maiden, and, you know, the other one. Granny Weatherwax knows which one she is, but you had best not say it to her face or she’ll give you such a look you’ll wish she’d just turned you into a frog.

Granny lives in the small backwater Kingdom of Lancre where Shawn Ogg is the whole army, as well as the King’s butler and footman, when he’s not cleaning out the castle privies.

She keeps the peace and makes all the hard choices that need to be made. She’s there for you when the cow kicks your pregnant wife and Death demands a life. She’ll shoulder the burden of who dies and square it with Death himself (who it must be said is not a monster), and make sure that the farmer doesn’t kill the cow out of anger.

She makes sure that she doesn’t have to resort to crude magic when good old Head-ology will straighten out most people.

She is feared and loved in equal measures, mostly because you pray that you don’t need to call on Granny at four a.m. to make a choice for you.

It’s always a good idea to leave Granny some of your best produce as a thank-you for past and future events. It will also make sure the milk doesn’t curdle and you don’t turn into a frog.

Not that she would do such a thing. I mean probably not, but it’s better to be safe than sorry.

“And what do you really do?” asked Tiffany.
The thin witch hesitated for a moment, and then:
“We look to … the edges”, said Mistress Weatherwax. “There’s a lot of edges, more than people know. Between life and death, this world and the next, night and day, right and wrong … an’ they need watchin’. We watch ’em, we guard the sum of things. And we never ask for any reward. That’s important.” ~The Wee Free Men

I hope you’ve enjoyed these five great characters from Terry Pratchett. Please share your favourites with us in the comments.