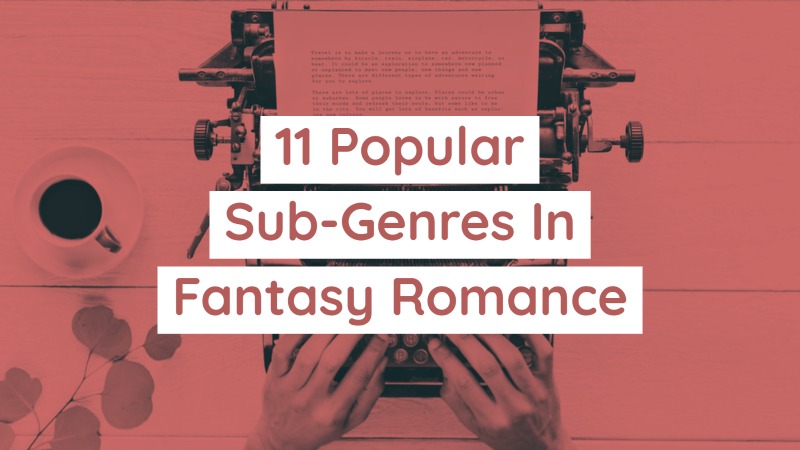 In this blog, we look at 11 popular sub-genres in Fantasy Romance. We hope this list helps you build a fantasy backdrop for a romance.

Spinning A Fantasy Romance – A Tale Of Two Worlds

Fantasy is an ever-popular genre. Now the sub-genre of fantasy romance is becoming a genre with its own sub-genres. Fresh voices continue to breathe new life into the genre. Like bestselling author Sarah J Maas, creator of the Crescent City series. Or T.S Joyce, who writes the  Wolves of Promise Falls series.

What Is A Fantasy Romance?

A fantasy romance features romance, yes, but also magic and other supernatural beings. Or mythical elements, like Greek mythology. Even astrology can inspire this type of story.

In fact, any magical creature you can imagine. Humans or half-breeds feature too.

As a genre, fantasy romance focuses on the love story, while other fantasy fiction may have a love story as a subplot.

Both will have elements of worldbuilding. But in a fantasy romance it is often softer, and it never overwhelms the romantic storyline.

Let’s look at 11 popular sub-genres within this romantic genre.

In this sub-genre, speculative fiction meets romance. It takes something from history, then explores what might have happened if things worked out in different way.

What if the Russian Revolution never took place and your princess heroine becomes queen? Or Marilyn Monroe never dies and finds true love?

To change history, characters must sometimes time travel to achieve a goal. This sub-genre also crosses over with Steampunk.

These stories are set in the present day. Magical or supernatural creatures exist in the real world.

In a closed world, the magic is secret or hidden, but may be discovered during the course of the story. In an open world, the magic co-exists with the human world. In both, the magic world is governed by rules that can’t be breached.

The stories don’t have to be dark. You could have a pretty high-school teacher as a wizard. She doesn’t want the handsome headmaster to find out – if only she knew he was a wizard too. Sometimes the sub-genre dovetails with paranormal romance.

This one is like a modern or contemporary fantasy – but the action takes place in a single city. It also has a grittier, moodier edge. Danger or suspense balances out the romance.

Of all the sub-genres, this one features the most action and violence. Strong alpha female warriors often take the lead. This is a contrast to the male-dominated characters of the genre in the past.

The storyline features conflict (wars, crusades),  plus elements of dark magic or sorcery. It often crosses over with historical fantasy, but the narrative is more about the hero and heroine.

The epic fantasy romance is one of the most ambitious in scope.

The story takes place in a fantastical world, often a parallel universe. The plot involves the struggle between good and evil, a quest, or a search for identity and destiny.

We’re almost halfway through our list of fantasy romance sub-genres. If you’re enjoying this post, read 101 Fantasy Tropes For Writers

In a historical fantasy, magic exists alongside historical events or figures. Stories can feature magical creatures, alterative history or a parallel world. Sometimes the fictional setting bears a resemblance to an actual historical period.

In some stories, history is just a backdrop. For example, the Belle Epoque for a love story between a rich Parisian banker and a half-vampire/half-human demi-mondaine. Other times, a historical event is intrinsic to the plot. For example, a time-travelling hero going back to Punic Wars to save a beautiful Sicilian heroine.

This is almost an off-shoot of urban fantasy. The author takes faeries or elves from mythological backgrounds and transplants them to an urban setting.

The novels are often grittier or cheekier in tone. They have a modern sensibility – it’s not unusual for a fae to ride a Harley or sing in a rock band.

Influenced by the punk subculture, rebellion and gender expression are prominent themes.

Set in the Victorian or Edwardian eras, steampunk is a popular fantasy to explore in a romance novel. The stories often have a Gothic element.

In this fantasy, we see the Hero’s Journey played out in a fantasy setting. The protagonist leaves their ordinary world to heed the call to adventure. They enter a strange new world and face many challenges. The conflict features war or battle.

(In this way, it is like an epic fantasy – except here we follow one main character’s destiny.)

If you’re writing a fantasy romance, the love interest is more important than the antagonist. The ‘hero’ is also more likely to be female and have magical abilities.

Example: The Silver Bullets of Annie Oakley by Mercedes Lackey.

Horror, witchcraft and the occult add an edgy, dark atmosphere to these stories. While the novel might include vampires or demons, the element of horror exists firmly in a fantasy world.

The tale is still frightening but is also rich in sensuality and eroticism. The shivers up the spine must come from both a kiss and the threat of danger.

The name comes from Anthony Hope’s swashbuckling The Prisoner of Zenda. Hope’s story is set in a fictitious European country called Ruritania. Sometimes authors set their stories in an imaginary country.

The Ruritanian fantasy not a sub-genre of fantasy romance. It is an old-fashioned romantic fantasy. It focuses more on manners and courtship.

But it’s worth mentioning here for its escapist elements. If you’re looking for a fresh hook, it offers an opportunity for a good story.

Fantasy and romance are two of the most popular genres. By creating these sub-genres in fantasy romance, you will appeal to a wider audience.