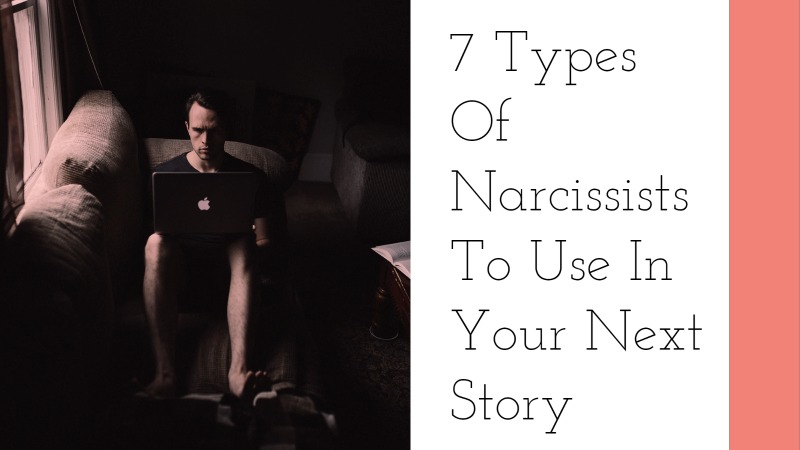 7 Types Of Narcissists To Use In Your Next Story

In the post, we offer seven types of narcissists to use in your next story, whether it’s a short story, screenplay or novel. We’ve included exercises and prompts to get you started.

Let’s be honest. The term ‘narcissist’ has become over-used, a catch-all phrase for any selfish behaviour.

Yes, we can all be selfish at times. A careless remark that hurts a spouse’s feelings. Putting too much pressure on a colleague. Wanting only the best for our children at school.

But, these behaviours pale in comparison to the narcissist. The true narcissist has taken the art of self-obsession to the next level.

These people seldom show empathy, shame, or regret. They don’t consider anyone’s feelings – only their own. Often this can make them difficult to live with. Sometimes, this type of disorder makes them downright dangerous.

While a sense of self-importance is healthy, the narcissist suffers from delusions of grandeur. Often, they experience fantasies of fame and glory. They want to be admired for perceived talents or good looks.

The typical narcissist is a master at manipulating and exploiting others. They create anything from financial ruin to sexual devastation.

Prominent American psychiatrist Dr James F. Masterson once wrote that, for the narcissist, other people exist only the way a hamburger exists for them – to make them feel good. They may charm you and manipulate you to see how wonderful they are, he said, but as soon as they get your admiration, they’ll drop you.

We find these ‘garden variety’ narcissists in real life. In fiction, however, they have to be a little more over the top. Not only must they be extraordinary, but they must also match the theme or genre of your book or script.

Of course, the narcissist isn’t just used in thrillers or moral fables.

7 Types of Narcissists To Use In Your Next Story

As a writer, adding a narcissist to your tale can be irresistible. If you’re looking to create an unforgettable antagonist, try one of these seven archetypes.

The criminal narcissist is a fascinating character. How do you get inside their head – and see the world from their viewpoint? Their lack of conscience makes them perfect for the role of ‘baddie’.

It could be the rapist who sees his victim as an object there to experience their power. An ice-cold and remorseless assassin. A feared and notorious mafia member. Or a possessive husband who kills his spouse in a rage – and then covers his tracks.

The covert narcissist hides in the shadow. The character uses stealth and cunning to manipulate events and characters in the story.

On the surface, they appear quite ‘normal’. In fact, they can be charming and successful, or appear to be shy and sensitive. But, soon the passive-aggressive nature comes through.  Highly sensitive to criticism, they tend to hold a grudge.

The danger of the narcissist doesn’t have to be a stranger or romantic interest. The parent as narcissist is another character to explore.

The narcissistic mother, father, or caregiver is a dominant character in the fictional family. Often this character will have no boundaries when it comes to their children. They see them as extensions or their own personality. Sometimes they will use words as weapons in cruel warfare.

Example: Josephine in Mother Mother by Koren Zailckas. A matriarch’s cheerful exterior hides a dark narcissist. She is determined to control the narrative of her daughter’s life. She even turns the family home into a prison.

[Read: 9 Narcissistic Mothers & How To Write About Them]

Evil or unbalanced kids make for great stories. As children we must learn to separate from our parents and forge independence. The narcissistic child doesn’t do this. They will cling to their mother or father at all costs.

Often they can be the golden and adored only (or adopted) child – and their parents unintentionally foster the child’s narcissism. In fact, the parents themselves may be narcissists.

Example:  In Yukio Mishima’s The Sailor Who Fell From Grace With The Sea, a boy becomes so possessive of his single mother, he manipulates a gang of friends into killing her new lover.

Say hello to the romantic narcissist. The character suffers from the Don Juan syndrome –  man who must conquer many lovers to validate his worth. But, you can have this type of narcissist in any gender and sexuality.

In a story, you could have a narcissistic girlfriend or boyfriend. Their traits may show in emotional manipulation or physical abuse. They are masterful at deception – and will often try to gaslight their partner.

[Suggested reading: Use These 7 Gaslighting Phrases To Make Your Antagonist More Manipulative]

Read more in 5 Ways To Write About Stalkers.

The narcissistic boss or leader is often overlooked in storytelling. However, most of us spend eight hours a day in the workplace – so there is opportunity to create a nasty manager or power-mad CEO.

The character can be a misogynistic man or a female megalomaniac. In short, they will use their authority to subtly torture their underlings. In some cases, they use their power, charm and success to seduce an employee.

Example: Miranda Priestly in The Devil Wears Prada by Lauren Weisberger. The editor of a glossy magazine tortures as much as she nurtures the young interns that stray into her Faustian trap.

The celebrity of fame-hungry narcissist is a great character to explore. Whether it is the movie or music studio, the political or sporting arena, this character feels a sense of self-importance and entitlement.

The danger is that they are shielded from the consequences of their selfish behaviour – by legal muscle or real muscle in the form of a bodyguard. This type of narcissist often seeks fame on social media and spends a lot of time posting selfies on Instagram.

Example: The radical preacher TJ Luther in Thomas Thompson’s novel, Celebrity. A petty criminal and womaniser, he transforms himself into a white-suited Southern messiah for the masses.

Sometimes the narcissist doesn’t act alone and teams up with another character who is equally self-absorbed and dangerous.

In the movie, Rope, Alfred Hitchcock took the real-life case of Leopold and Loeb to tell the story of two students who conspire to commit the perfect crime. Similarly, in the 2018 short film Pimped, two misogynistic friends play cruel games with the girls they meet in bars.

Here are five exercises to help you explore the narcissistic archetypes discussed.

We hope this post helps you understand the seven types of narcissists to use in your next story.