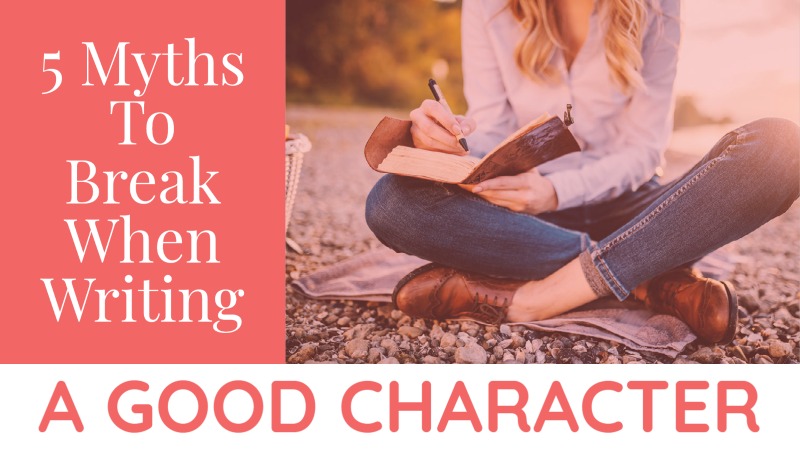 5 Myths To Break When Writing A Good Character

In this post, we look at five myths to break when writing a good character without boring everyone.

We use Leonard from The Big Bang Theory as an example of an engaging good guy.

When did good become a four-letter word?

The world – and the world of stories – needs more good people, less violent plots, and happy endings. We’re not talking about unrealistic fairy tales – it’s about looking for the good.

Yes, the cynical among us may see it as the Pollyanna Syndrome, someone who is unreasonably or illogically optimistic.

Who is Pollyanna? She’s a character created by Eleanor Porter. Pollyanna is an orphan sent to live with a stern aunt. Happy and cheerful, she is fond of playing the Glad Game.

Pollyanna’s focus on the ‘good’ and sense of gratitude are the pillars of positive psychology and mindfulness. (She was ahead of her time.)

However, she is perhaps a bit too worthy. As a writer, you can make your character honest and deserving. But the niceness must be tempered by another characteristic, even if it is a subtle idiosyncrasy. (Maybe they can be grumpy in the morning, or have bizarre superstitions.)

Their very ‘niceness’ could be a source of conflict with others. For example, the patient brother who doesn’t stand up to his rebellious twin. Or the dutiful daughter who puts her mother’s needs above her own – much to the chagrin of her spouse.

The Argument For Good

Readers and audiences like a stable and consistent character as their ‘guide’ in the story. They love to have a character to champion.

When the lead or hero has a purity, a simplicity and a clear goal – they become radiant. Readers are drawn to their light.

Don’t confuse this archetype with a deceptive antagonist. A character ‘masking’ the darkness of their true nature. (In other words, when ‘nice is hiding nasty’.)

Good people live their own lives in an authentic way. They know their own worth and value in the world.

When it comes to writing good characters, we hesitate. Why? We think they must be a pillar of virtue or a perpetual do-gooder.

Let’s get rid of five myths.

5 Myths To Break When Writing A Good Character

We know that perfect people are annoying. No one likes a modern Little Goody Two-Shoes.

Why? If someone doesn’t make a mistake, we don’t see them recover from a setback. If they have zero flaws, we can’t relate to them. The character doesn’t grow.

Nice people are the same as anyone else. They do make mistakes. They do have flaws. But how they handle a crisis is different. How the flaw shows up in the story gives them an endearing quality.

The good guy finds a balanced way to resolve a conflict, or deal with a difficult person. This protagonist lives in a principled way – they will honour a commitment. If they mess up, they own up. They may be injured and upset when they expect others to do the right thing – and they don’t.

Often we think that nice people have little to contribute. We don’t see their lives as exciting. They don’t stir up much envy.

The lead character isn’t the ‘life of the party’, but they can be good company. As communicators, they are attentive and engaged listeners. They can be a nurturing parent or a supportive friend.

The ‘nice’ character could pursue solitary hobbies or passions. The calm exterior hides a rich inner life. You could build this interior world and viewpoint in your story. It would make a good contrast to the calm surface.

Read: 7 Secrets To Writing Happy Characters Without Boring Your Audience

Sometimes a character’s languid or amiable nature is confused – and exploited – as weakness. This a major myth to break. This protagonist has a strong and unshakeable moral core that keeps them on track. They are not easily swayed, tricked or seduced.

Some may see nice people as ‘fragile’ and need to be protected. The truth is that they are independent and possess a latent power, talent, or skill. In your story, let them draw on this hidden strength in the face of a crisis.

Even nice people have their limits. The good guy is often a defender. They will fight to protect an innocent or an ideal; they may end up being persecuted.

4. Don’t Confuse Good With Being A Follower

There’s no reason a nice character can’t be a leader. Just because they analyse and weigh up situations first, it doesn’t mean they are indecisive. They simple think before they act.

Wise, easy to approach, and comfortable in their skin, they make the best kind of leader.  Whether they are leading a small army or a whole nation, they show compassion and empathy. A light touch goes a long way. For this character, gaining trust and loyalty is more important that brutal authority.

In a romance novel, the beta hero makes a nice change to the alpha-hero archetype. Read about the beta hero in The Romantic Hero.

Silence is often mistaken for sullenness or stupidity. But, as we all know, often a sharp intelligence lurks under a calm voice, placid smile, or gentle eyes. In a story, other characters may underestimate this ‘good’ character – and realise their mistake too late.

Give your hero or lead character a quiet intelligence. They could be introverted and creative, solitary and strategic, or comfortable in a small peer group. With a healthy sense of self-worth, they don’t need to flaunt their IQ, wealth, or powerful status.

This hero doesn’t have anything to prove to anyone – making them an attractive and magnetic character.

Leonard, in the popular sitcom The Big Bang Theory, is the goofy good guy. He is the perfect counterpoint for his room-mate Sheldon. In fact, he is the most ‘together’ and mature of the crazy crew on the show.

Why do we love Leonard so much?

For more on writing humour, read Find Your Funny -11 Tips For Writing Humour

Here are three exercises to help you explore good characters in a story.

As you can see, good characters don’t have to be boring. The smart writer will use them as an opportunity to create warm, worthy, memorable, and relatable characters.

Good guys may sometimes get lost in the crowd and finish last – but other times they are they quiet heroes who win the war.