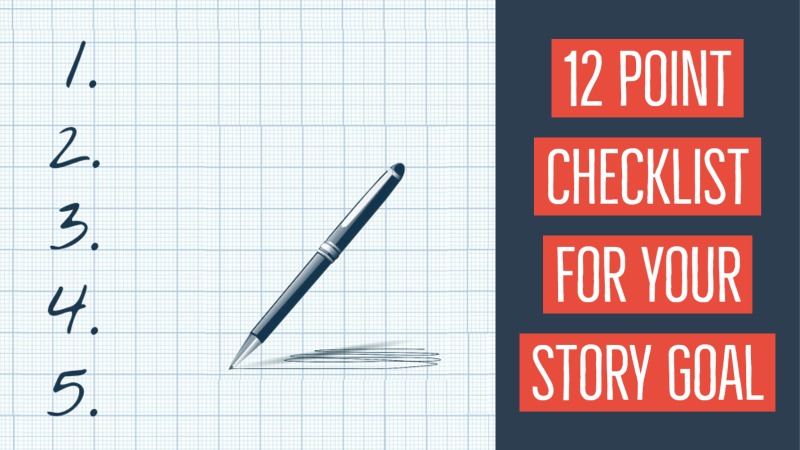 12 Point Checklist For Your Story Goal

Follow the useful checklist in this post to make sure you have a powerful story goal and a compelling plot.

How do you know you have the right story goal? Does it seem both realistic and exciting? Is it a goal that others can relate to?

Will the readers or audience understand the main character’s goal? Will they understand why they want the things they want? Is the reason behind the plot compelling enough to sustain a good story, script or novel?

And as a writer, how do you assess all this? Follow our comprehensive 12-point checklist to test your story goal and plot.

12 Point Checklist For Your Story Goal

A story goal is something your character has to do to solve a problem or crisis. It must be explicit and tangible. For example: A grieving parent wants to destroy the drug dealer who killed his daughter.

A story may have short-term and long-term goals. Example: An ambitious female Hollywood executive wants to become the head of a movie studio. But, how she climbs the ladder and breaks ‘the glass ceiling’ will require a series of tactics.

Define your story goal in one short sentence or paragraph. It should be simple but exciting.

Read: The Story Goal – The Key To Creating A Solid Plot Structure

2. Who Is Driving The Story Goal?

Keep clear in your mind who is the force behind the plot. Often a new writer believes it has to be the hero. But, it could be the antagonist or anti-hero.

For example: A Mafia hitman, just days away from the electric chair, wants to save an innocent family from his dangerous partner.

Sometimes the setting could inform a story goal. For example, in Hatchet, teen hero Brian must survive the Canadian wilderness after a plane crash.

3. Why Does The Character Want To Pursue The Goal?

Motivation is the glue that binds a story goal. As a writer, you have to understand the protagonist’s psychology, backstory, and personality.

In Dean Koontz’s Quicksilver, Quinn is an orphan found abandoned in the desert. He develops strange magnetic powers as an adult. Now, he has to discover the source of his strange past and scary powers because it key to his identity and future.

4. Is The Goal Believable?

When it comes to human nature, anything is possible. Even the absurd can be plausible is its presented as a human foible. People will suspend their disbelief if they can relate to this aspect of a story.

The reader or audience must be able to see themselves in the same predicament as your hero – if you can elicit empathy or any other emotion, they are more likely to believe the story goal.

In your story, make sure your character is pursuing a dream or cause that others will root for. (For example, fighting for the love of a good woman, or a youngster hoping their talent is discovered.)

If the goal is the ballast of your overall plot, it must have the right weight and significance.

The goal must seem reasonable for a certain type of character to take on, even if it is not immediately obvious.

Example: In The Constant Gardener, Justin Quayle is a fairly complacent diplomat who, as a hobby, tends to his garden in post-Colonial Kenya. After his activist wife is killed, he starts digging for the truth. For him, it’s about exposing a terrifying conspiracy involving a multi-national pharmaceutical company.

6. Is The Goal Compelling Enough?

In Miss Benson’s Beetle, the main character abandons her boring job to travel to the other side of the world in search of a mysterious and elusive beetle. This is a fascinating and radiant goal for an unusual adventure – it draws the reader in from the title alone.

However, this is not a gimmick or hook. The novel powerfully explores themes of friendship and loyalty. The goal relates to theme and character. As a lonely child, Margery Benson spent her time catching beetles.

7. Will The Reader Understand The Goal?

Sometimes, as the writer, you are clear about the story goal and what the main character wants in the story. The reader, however, is lost and confused.

This happens when you try to make your story too dense and complex – too allegorical, metaphysical or literary. If you get caught in the reeds, edit the manuscript or screenplay to be more direct and simpler.

Don’t be afraid to state the goal in a single sentence or line of dialogue. For example: ‘I will win Lee back before the New Year’s Eve party!’

Or: Estee Trammell would do anything to make sure her husband was CEO of Digital Dimensions.

8. Will The Goal Sustain The Scope And Length Of The Story?

Finding an alluring outfit for a Valentine’s blind date may be a sufficient goal for a very short story – it wouldn’t be strong enough for a novel.

In Suddenly There Was Mrs. Kemp by Ted Leighton, the villainous lead must kill his blackmailing neighbour who knows he killed his wife. It’s the ideal goal for a seven-page suspense story.

However, in Magician, a 500-page epic by Raymond E Feist, the story goal is far grander. The orphan Pug is apprenticed to a master magician.  As a hero, he is swept into a tumultuous plot of adventure, war and intrigue as he grapples with his destiny.

9. Will The Goal Be Hard Or Almost Impossible The Achieve?

Another common mistake is to make the story goal too flimsy or easily achievable. The hero must have their personal mountain to climb – their own demons to quell.

In the classic movie Rocky, for example, Rocky is a down-on-his-luck boxer working as debt collector. He gets the chance to prove himself in the ring against a world heavyweight champion.

In his mind, Rocky doesn’t believe he can win, but he pushes himself and endures intense pain during the full 15-round match. It’s a hard-won victory. He has proved that he is not just ‘another bum’.

10. Is The Goal Deeply Personal?

The difference between a goal and a task or job is the level of personal commitment. For example, an overweight character may want to lose weight to show an ex-lover what they are missing out on.

In Fleming’s final novel You Only Live Twice, James Bond is missing and presumed dead. In fact, the secret agent is suffering from amnesia. He is living as a simple fisherman. A newspaper article triggers something in his mind.

Bond’s mission is now intensely personal – to recover his memories, to reclaim his past and beat the villain responsible.

11. Is The Goal A Matter Of Survival?

There must be a lot at stake. The lead character’s future and destiny depends on achieving the goal. It can be subtle or extreme, but it must be real. In The Hunger Games, Katniss must fight to the death on live TV – she simply has to win.

Another example: The alcoholic FBI profiler struggling to beat his addiction is trying to survive physically, psychologically and emotionally. The stakes can be even higher. If he doesn’t remain sober, he won’t be able to stop a notorious serial killer.

12. Does The Goal Match Your Genre?

You have to anticipate what the reader is expecting from a certain genre. If a fan of modern romances picks up your book, they want a love story. They want Mills & Boon. They expect a relatable heroine falling for a handsome hero in an exciting location.

If the plot is less about a developing romantic relationship and deepening sensual tension, and more about the business the hero is starting, the reader will be frustrated and disappointed.

As a writer, you can use this checklist to test the strength of a plot and a character’s motivation. The more questions you can answer confidently, the stronger your story will be.

Why not use it for your next novel or screenplay?