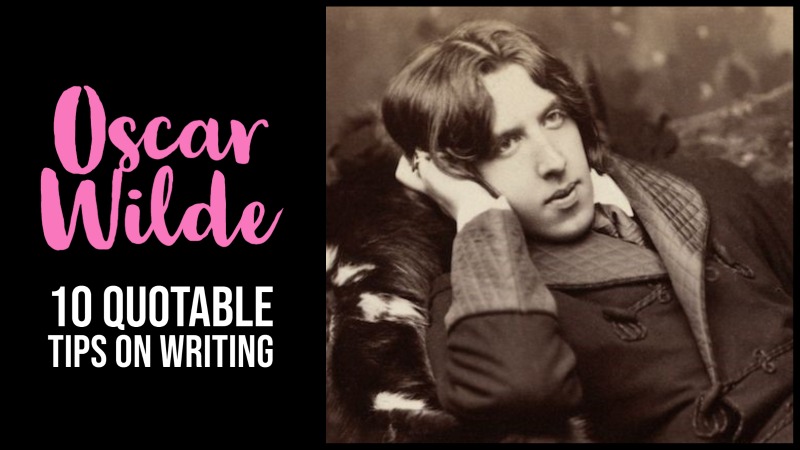 Writers Write shares writing tips and writing resources. In this post, we share 10 quotable tips from Oscar Wilde on writing.

Oscar Wilde was born 16 October 1854, and died 30 November 1900. Wilde was an ‘Irish wit, poet, and dramatist whose reputation rests on his only novel, The Picture of Dorian Gray (1891), and on his comic masterpieces Lady Windermere’s Fan (1892) and The Importance of Being Earnest

And his writing is delightful. Every sentence in The Picture of Dorian Gray is quotable for better or worse.

His plays capture your attention with wonderful wordplay. And, his writing will leave you in despair, because you will never be as good a wordsmith as Oscar Wilde was on his worst day.

So, let us lament at this fact and learn what we can from the world’s wittiest writer.

1. ‘I am so clever that sometimes I don’t understand a single word of what I am saying.’

–The Happy Prince and Other Tales

If you don’t understand what you are saying, why should I? Don’t be so clever you become unreadable.

Edit your work until even the densest reader will think it is witty.

2. ‘The good ended happily, and the bad unhappily. That is what fiction means.’

–The Importance of Being Earnest

This is a good thing to remember for anyone who wants to subvert the expectations of readers.

That is to say, don’t do it. People read fiction to get away from reality, not to be told about it. They like (mostly) happy endings.

3. ‘An idea that is not dangerous is unworthy of being called an idea at all.’

–The Epigrams of Oscar Wilde

Much of what Wilde wrote about was controversial and it got him in trouble. At the same time it got him noticed and, well, we are still talking about him.

4. ‘It is what you read when you don’t have to that determines what you will be when you can’t help it.’

–The Decay of Lying

A writer’s style is not going to be determined by set-works from English class, but by the thousands of books you read just because you want to.

Particularly, the one’s you read over and over again.

Keep that in mind when you cultivate a writing style.

–The Soul of Man under Socialism

If you have a boring mind, it will have boring thoughts, and for the love of God please don’t make me read the books it writes!

6. ‘Books are never finished. They are merely abandoned.’

You have to throw your book to the wolves eventually. This is called ‘publishing‘.

It will never be finished but, you will eventually be done with it.

7. ‘There are no more than two rules for writing: having something to say, and saying it.’

There are, however, a number of best practices which we cover in several good courses.

8. ‘Words! Mere words! How terrible they were! How clear, and vivid, and cruel! One could not escape from them. And yet what a subtle magic there was in them! They seemed to be able to give a plastic form to formless things, and to have a music of their own as sweet as that of viol or of lute. Mere words! Was there anything so real as words?’

Words tend to stick in the mind even late at night when one wants to sleep.

Sometimes, writing them down allows a writer to get on with their life.

9. ‘There is no such thing as a moral or an immoral book. Books are either well written or badly written.’

If you have a good idea and know you can write it well, don’t let a sense of morality stop you.

Goodness knows it hasn’t stopped some really awful and awfully good things from being published.

10. ‘If one cannot enjoy reading a book over and over again, there is no use in reading it at all.’

A good writer should aim for this. You should write a book that will captivate a reader on their first reading just as much as their tenth.

I have a few books that are held together with goodwill and Sellotape that attest to this statement.

Bonus Tip: ‘Be yourself; everyone else is already taken.’

I particularly like this last quote because it is one of the most famous Wilde quotes and there is no evidence he ever wrote it.

I think this would please him.