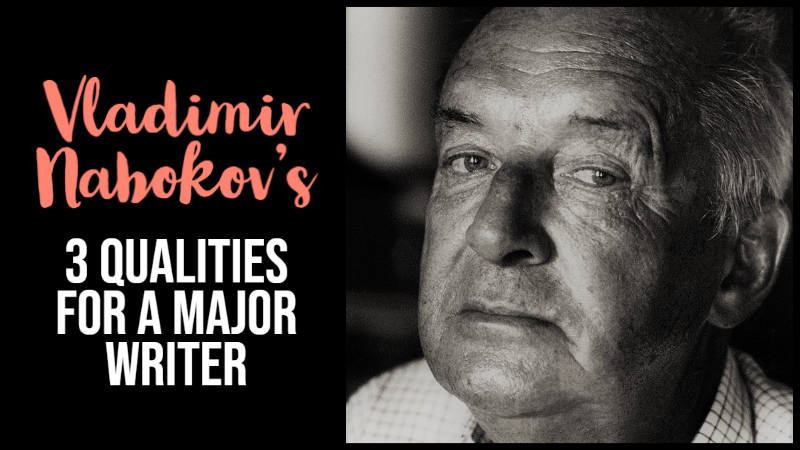 Writers Write shares writing tips and writing resources. In this post, we share Vladimir Nabokov’s 3 qualities for a major writer.

Vladimir Nabokov was a Russian-American novelist. He was born into an old aristocratic family on 22 April 1899 in St. Petersburg, Russia. He died 2 July 1977 in Montreux, Switzerland.

Considered the ‘foremost of the post-1917 émigré authors‘, he was known for his use of complex and original plots, and clever alliteration and wordplay. Nabokov’s Lolita is his most famous novel.

Lolita was ranked fourth in the list of the Modern Library 100 Best Novels in 2007; Pale Fire was ranked 53rd on the same list; and his memoir, Speak, Memory, was listed eighth on publisher Random House’s list of the 20th century’s greatest nonfiction. His great affection for his father and the environment in which he grew up is evident in this memoir.

A collection of Nabokov’s letters to his wife was published as Letters to Véra in 2015.

He was a finalist for the National Book Award for Fiction seven times, but never won it. He was awarded the National Medal for Literature for his life’s work in 1973.

He also made serious contributions as a lepidopterist and chess composer.

In his Lectures on Literature, he explores the qualities a major writer needs.

According to Nabokov, a writer should be:

The three facets of the great writer — magic, story, lesson — are prone to blend in one impression of unified and unique radiance, since the magic of art may be present in the very bones of the story, in the very marrow of thought. ”