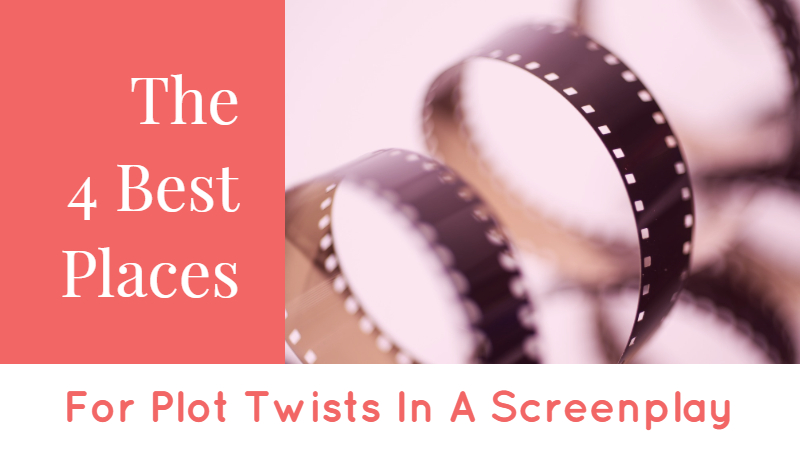 We write about the 4 best places to put plot twists in your screenplay.

There’s an old saying that goes, “The most a story can do is surprise.”

Of course, it should do more than deliver a few cheap ‘Jack-in-the-box’ moments. It must entertain, move the audience, and deliver a satisfying ending.

But, if you are going to plan a plot twist, where best to put it?

The 4 Best Places To Put Plot Twists In Your Screenplay

In the first act of your screenplay, you’re setting up the world of the characters and the premise of the story. So, it’s probably not a good idea to put a major plot twist in the first 10 to 15 pages of the script.

As examples, let us use the parable of the young and wayward prodigal son who returns home to his father and older brother. We’ll explore four different scenarios below.

You can put a plot twist at the end of the first act or quarter of your screenplay. It probably shouldn’t be a major one, but it could the dramatic moment you’re looking for to propel the characters into an extraordinary new world.

Example: The prodigal son returns home, but is now transgender and lives as a woman. His father has problems accepting the change, but the older brother helps the two reconcile.

You can put a plot twist in the middle of your screenplay. This could be the intense and breath-taking first climax in your screenplay. In other words, a ‘story hinge’ that takes the plot in a completely new direction.

Example: The prodigal son is revealed as an impostor who knew the genuine son in prison before he died. He has returned to kill the wealthy father and claim his inheritance. The older brother must now stop him.

You can put a plot twist in the third act, either at the start of the act or just before the climax. This is where most screenwriters place a major plot surprise because it has the most effect and releases the most tension.

Example: The prodigal’s older brother is revealed as the one who betrayed his younger brother and was a catalyst in him leaving. The father is devastated that his eldest son has betrayed the family.

And, last but not least, you can even put a plot twist right at the end of your screenplay. This can be a ‘cliffhanger’ that acts as a teaser for the next chapter in the story, or it can completely subvert the entire story.

Example: The father tells the prodigal son that he was adopted and never his real son; in fact he and his older brother were both adopted so their rivalry was in vain.

The most a screenplay can do is tell a great story. Often that great story includes one or two mind-blowing twists.