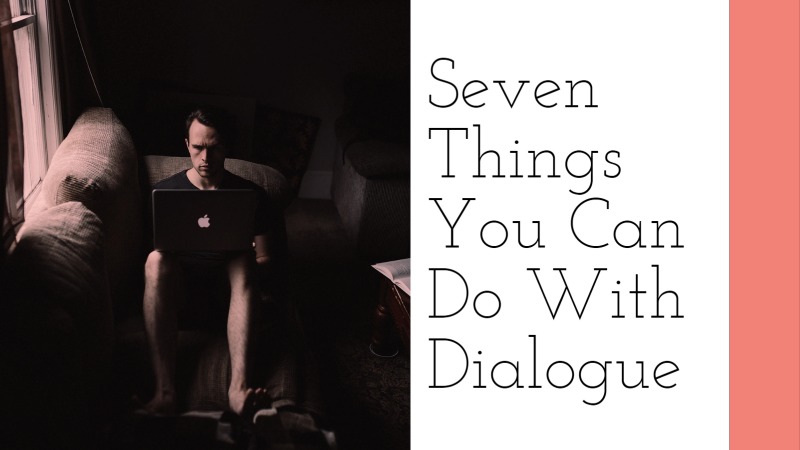 Dialogue is a writer’s friend. It helps you in many ways. In this post, we reveal seven things you can do with dialogue in a story.

7 Things You Can Do With Dialogue In A Story

Dialogue is a powerful, but often underutilised, tool in writing. Dialogue lets you move away from narration and it allows you to bring your story to life.

Good dialogue does the following:

Dialogue forces the writer to make the characters interact. When characters interact you create events and scenarios that bring them closer or further away from achieving their story goal. Get your character off the couch by making them do stuff.

‘We’re out of milk.’ – what happens when you character goes to the store?

When we only use narrative to tell our story we give our readers a secondary version of the events. When we use dialogue the story comes to life and the readers experience the events for themselves. Dialogue is one of the easiest ways to move your story from telling to showing.

Telling: Johnathan didn’t want to enrol for a business degree.

Showing:  Alison upended the third and final draw. ‘You have to know where it is. It’s your college acceptance letter. It’s your entire future.’ She rifled through the papers on the desk.

‘I really don’t know, Mom. I haven’t seen it.’ Johnathan didn’t look up. He was putting the finishing touches on his newest drawing. He held the paper up to the light. You could still see the faint outline of the logo that read Harvard Business School, but he darkened the shadow and it disappeared completely. ‘I haven’t seen the letter anywhere. Maybe Dad threw it out when threw out my sketches.’

Conflict, whether subtle or overt, is a vital part of fiction, but it doesn’t always have to be physical. Dialogue is a great source of conflict.

‘You never told me about the invitation.’ He stomped to the fridge. The bottles rattled as he yanked open the door.
Beryl took a deep breath and smoothed her skirt. ‘Yes, I did. I said that we were invited and that I accepted.’
‘Well, this is the first I’m hearing of it.’ The bottles rattled again and he slammed it once more. ‘And we’re not going.’
Beryl gathered her clutch and courage. ‘Well, then I guess this the last you’ll hear from me.’ And walked out the door.

How we speak reveals so much about who we are. Use your characters’ words to show who they are.

He adjusted his name tag and moved towards the customer. He needed to close at least one deal today. Aron stuck out his hand to the nearest guy praying the hulk of a man wouldn’t crush it. ‘Aron Bronson, pleased to meet you.’
‘Impossible.’ The man loomed overhead. ‘The Aron Bronson I knew was snivelling, little brat who tattled to the teacher.’
Aron tried not to flinch as the bones in his hand cracked and groaned under the increasing pressure. ‘Jonty?’ he squeaked.

When you use dialogue to convey setting it will help you to avoid writing long blocks of description.

Ally followed the dim pool of light as it bounced down the passage. ‘What is this place?’ She shone the torch into a room crowded with old metal beds.
‘It used to be a psych ward. They closed it down in the sixties.’
Candice sounded so nonchalant, but Ally wasn’t fooled.
‘Why are there handcuffs attached to the beds?’
‘It was a ward for the criminally insane.’

We need to share a lot of information with our readers. We also should vary how we present our information. Dialogue is a good tool to do that.

He heard them coming down the passage and prayed they weren’t singing for him, but the dreary rendition of ‘Happy Birthday to You’ limped closer and closer to his desk.

‘Come on,’ someone hissed, ‘light it.’
Jeff cringed. Please don’t. Please don’t let them be coming here.
‘One, two, three.’ A staged whisper. A whiff of sulphur from the matches and then it began.
‘Haaaaa-ppppp-yyyy Birthdaaaaaaaay, dear Je-ffffffff.’
They sang. He shrunk, but they kept limping closer and closer with that off-key twang.

The crime scene tape fluttered in the breeze. The detectives approached the crime scene with caution and dodged the press by crossing to the other side of the street. They needed to be careful and could not afford another blunder. They were on thin ice with the captain already.

Brett glared at the journalists.
‘Vultures,’ he hissed as he crossed the street.
Don held up the crime scene and he ducked under it. The wind tugged at his notebook.
‘Can’t fuck this one up. Not again.’ Brett mumbled as he knelt next to the body.
‘Captain will kill us, that’s for sure.’

Dialogue is an amazing tool to enhance your writing. There are many things you can do with dialogue. When you are stuck or when your scenes seem a little flat, make your characters talk.