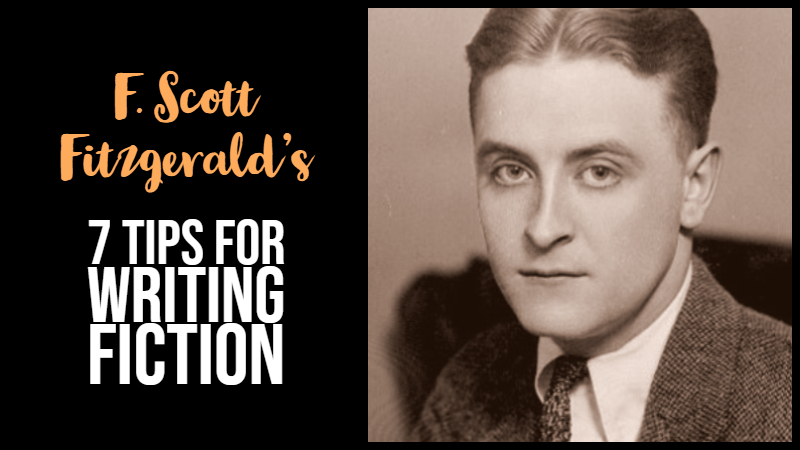 F. Scott Fitzgerald (born 24 September 1896, died 21 December 1940) is regarded as one of the greatest American writers of the 20th century.

Considered a member of the ‘Lost Generation’ of the 1920s, he finished four novels: This Side of Paradise

, The Beautiful and Damned, Tender Is the Night

, and his most famous, The Great Gatsby

. A fifth, unfinished novel, The Last Tycoon, was published posthumously.

Four collections of F. Scott Fitzgerald‘s short stories were published, as well as 164 short stories in magazines during his lifetime.

Fitzgerald is famous for writing about the Jazz Age, and the failure of the American Dream, which is recurring theme in his work. Other themes included materialism, class, and romantic idealism.

His private life, with his wife, Zelda Fitzgerald, and his friendship with Ernest Hemingway, in both America and France, became almost as celebrated as his novels.

Open Culture created this list of tips by selecting seven quotations from F. Scott Fitzgerald on Writing, a collection of the author’s remarks on his craft, taken from his works and letters to friends and colleagues

2: Make a detailed outline of your story.

“Invent a system Zolaesque…but buy a file. On the first page of the file put down an outline of a novel of your times enormous in scale (don’t worry, it will contract by itself) and work on the plan for two months. Take the central point of the file as your big climax and follow your plan backward and forward from that for another three months. Then draw up something as complicated as a continuity from what you have and set yourself a schedule.”

3: Don’t describe your work-in-progress to anyone.

“I think it’s a pretty good rule not to tell what a thing is about until it’s finished. If you do you always seem to lose some of it. It never quite belongs to you so much again.”

“You ought never to use an unfamiliar word unless you’ve had to search for it to express a delicate shade–where in effect you have recreated it. This is a damn good prose rule I think…. Exceptions: (a) need to avoid repetition (b) need of rhythm (c) etc.”

6: Use verbs, not adjectives, to keep your sentences moving.

“About adjectives: all fine prose is based on the verbs carrying the sentences. They make sentences move. Probably the finest technical poem in English is Keats’ “Eve of Saint Agnes.” A line like “The hare limped trembling through the frozen grass,” is so alive that you race through it, scarcely noticing it, yet it has coloured the whole poem with its movement–the limping, trembling and freezing is going on before your own eyes.”

“I am alone in the privacy of my faded blue room with my sick cat, the bare February branches waving at the window, an ironic paper weight that says Business is Good, a New England conscience–developed in Minnesota–and my greatest problem: “Shall I run it out? Or shall I turn back?” Shall I say: “I know I had something to prove, and it may develop farther along in the story?” Or: “This is just bullheadedness. Better throw it away and start over.”

The latter is one of the most difficult decisions that an author must make. To make it philosophically, before he has exhausted himself in a hundred-hour effort to resuscitate a corpse or disentangle innumerable wet snarls, is a test of whether or not he is really a professional.

There are often occasions when such a decision is doubly difficult. In the last stages of a novel, for instance, where there is no question of junking the whole, but when an entire favourite character has to be hauled out by the heels, screeching, and dragging half a dozen good scenes with him.”