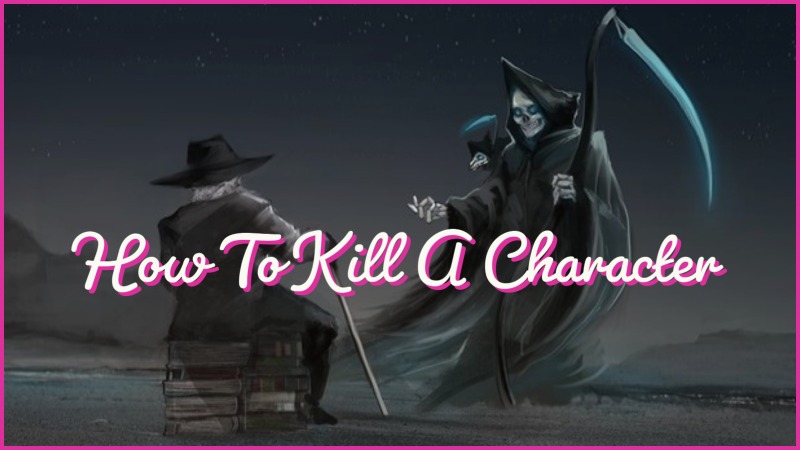 Getting Away With Murder: A 5-Point Plan On How To Kill A Character

To live or not to live? Are you thinking of killing a fictional character? If you are, use our 5-point plan on how to kill a character.

Hello, you monster. So, you want to kill a poor innocent character. A character you yourself gave life. Well, truly, you have fallen low, but you have also come to the right place.

Like any crime, this one has a victim – your reader.

And, it is a crime. Make no mistake, your readers will judge you for it for the rest of time. So, you had best get it right or face the consequences.

Now, nobody is going to judge you for war crimes. By all means, blow up a thousand Alderaans with your Death Star, slaughter a billion Orcs with elven weapons of mass destruction, and murder your way through Victorian society while smoking a pipe.

We will forgive you these minor sins. But, give one of those bodies a name and we have a problem.

At this point, you might be asking yourself why should I even do it?

5 Reasons To Kill A Character

3 Reasons Not To Kill A Character

How To Kill A Character

Having made sure it is a good idea to kill a character, here are some suggestions:

Death is never expected. Even when a character is fated to die or they have an illness, it should come at a time when they have not planned for it.

Preferably, a time when it would most benefit your antagonist.

They greater the shock to your characters and readers the better. If you can make an editor shout ‘No! Not X!’, you have done well.

2. It should not be a normal death.

Having a warrior die in battle is something that only happens in real life.

In fiction, the great warrior dies several minutes or even hours after sustaining their mortal wound.

This makes them more heroic and also gives time for dialogue and goodbyes.

Obi Wan dies right when they could have used him most in Star Wars.

3. It should be glorious or meaningful.

Make sure their death is noticed.

This could mean that they die doing something heroic, like saving another character. Or they could leave the surviving characters a will with the secrets to their enemy’s weaknesses.

Regardless, it should be a pivotal moment in the story and not just something that quietly happens in the background.

MCCOY: (holding Kirk back):  No! You’ll flood the whole compartment!
KIRK: He’ll die!
SCOTTY: Sir! He’s dead already.
MCCOY: It’s too late.
(Kirk walks to the glass.)
KIRK: Spock!
(Spock walks weakly to the glass.)
SPOCK: The ship… out of danger?
KIRK: Yes.
SPOCK: Do not grieve, Admiral. It is logical. The needs of the many, outweigh…
KIRK: The needs of the few.
SPOCK: Or the one. I never took the Kobayashi Maru test until now. What do you think of my solution?
KIRK: Spock.
(Spock sits down.)
SPOCK: I have been, and always shall be, your friend.
[Spock places his hand against the glass and spreads his fingers in the Vulcan salute.]
SPOCK: Live long and prosper.

4. It should be noble or horrid.

The hero needs to go down fighting insurmountable odds. The villain needs need to get his just desserts.

The death of the 300 Spartans that held back the Persian army to give the Greek armies enough time to muster is a good example here.

At least they fought in the shade.

5. It should feel right.

The logic of the death must be sound. The hero must not have any way out of it. The villain must have used his last trick already.

The writing must be on the wall; the die cast; the i’s dotted the t’s crossed, and when all is in order, you can plunge your pen deep into the heart of the character with a gleeful grin or tearful eyes. You can do this because you know it had to be done.

I always get choked up when the Iron Giant dies.

Now that you armed with such deadly knowledge on how to kill a character, I hope you can use it wisely. Kill sparingly lest you be left with no characters left to continue your story.

But, do kill. At least once in a while. It will keep them on their toes.

Written by Christopher Luke Dean (Many Bothans died to bring us this article.)