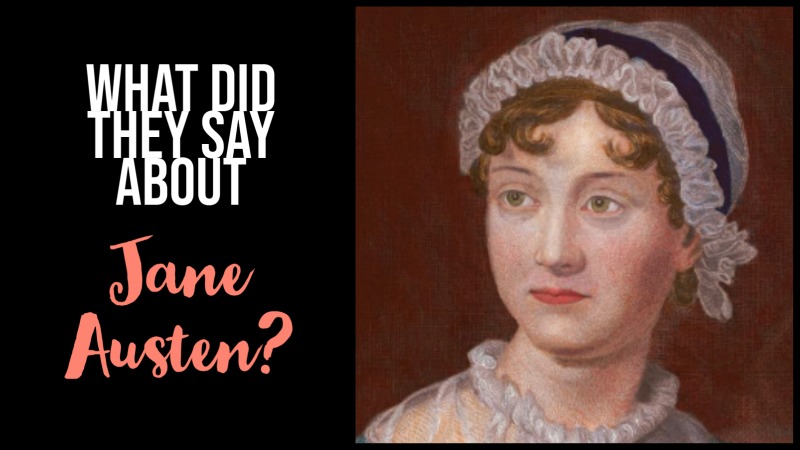 Are you a Jane Austen fan? Or not? In this post, we’ve shared what other authors had to say about Jane Austen.

Jane Austen was born 16 December 1775 and died 18 July 1817. She is one of the most well-known of the English authors. Her novels include Pride and Prejudice, Emma, and Mansfield Park. We are sharing this post on the anniversary of her birthday.

From time to time, writers must check to see what their fellow writers think about their work. Not only is it nice to get a compliment but the rage from a bad review can fuel tens of thousands of words.

Even authors who we think of as greats got mixed reviews. Do you want to see what they said about Jane Austen?

But What Did They Say About Jane Austen?

I don’t think J. K. Rowling needs to imagine what being a famous author would be like, but she is clearly on team Jane. She said:

On the other hand, Mark Twain said about her books: ‘Once you put it down you simply can’t pick it up.’

He also said that her books have profound effects on libraries: ‘Jane Austen’s books, too, are absent from this library. Just that one omission alone would make a fairly good library out of a library that hadn’t a book in it.’

Twain, of course, famously hated her. He said if he could he would dig up her body to bash in her skull with her leg. So, a moderate critic by modern standards.

Some people were more succinct.

D. W. Harding, a critic, said her books were read ‘by precisely the sort of people whom she disliked…’

The French critic Philarète Chasles said she was ‘a boring, imitative writer with no substance’, while his countrywoman Madame Anne Louise Germaine De Staël simply said Pride and Prejudice was ‘vulgaire’.

Rudyard Kipling, on the other hand, wrote a poem to honour her:

‘Jane lies in Winchester—blessed be her shade!
Praise the Lord for making her, and her for all she made!
And while the stones of Winchester, or Milsom Street, remain,
Glory, love and honour unto England’s Jane,’

She was laid to rest in Winchester Cathedral. The groundskeeper reportedly asked, ‘Was this Lady anyone special?’ when he would show people her stone.

Surely, you know Arnold Bennett! He wrote all those books you’ve never heard of…

Winston Churchill made his attendants read Pride and Prejudice to him when he had Pneumonia. He said: ‘What calm lives they had, those people! […]No worries about the French Revolution, or the crashing struggle of the Napoleonic Wars. Only manners controlling natural passion so far as they could, together with cultured explanations of any mischances.’

Which would be a comfort to anyone fighting a world war.

Virginia Woolf wrote: ‘I would rather not find myself in the room alone with her (Jane).’

Perhaps, Jane Austen was a difficult person to be around? Maybe so.

D.H. Lawrence said: ‘Already this old maid typifies ‘personality’ instead of character, the sharp knowing in apartness instead of togetherness, and she is, to my feeling, English in the bad, mean snobbish sense of the word, just as Fielding is English in the good generous sense.’

Charlotte Brontë said: ‘Jane Austen was a complete and most sensible lady, but a very incomplete and rather insensible (not senseless) woman.’

This was meant to be an insult, and if you read more of Brontë’s quote, it is. But, I don’t recommend reading more of Brontë in general.

Ralph Waldo Emerson said: ‘I am at a loss to understand why people hold Miss Austen’s novels at so high a rate… Suicide is more respectable. [than living like her characters do.]’

A bit harsh given that most of the Ladies and Gentlemen in these books own ‘half of Devonshire’.

However, nobody can be all bad and I will leave you with this quote from Northanger Abbey as proof: ‘The person, be it gentleman or lady, who has not pleasure in a good novel, must be intolerably stupid’

‘I do not want people to be very agreeable, as it saves me the trouble of liking them a great deal’ Jane Austen, letter to Cassandra Austen, 24 December 1798