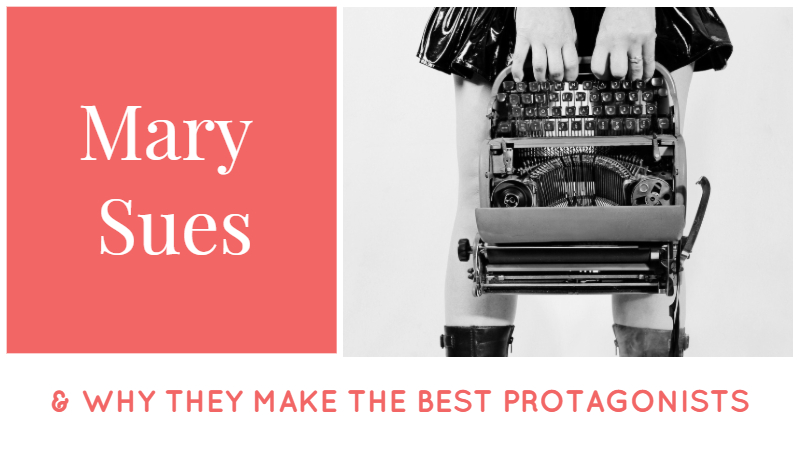 Mary Sues & Why They Might Make The Best Protagonists

Mary Sues have become a catch-all insult for poorly written characters. People will often accuse a character of being a Mary Sue, especially when they don’t like the book or movie, instead of examining what is actually wrong with the writing.

So, let me show you what a Mary Sue is and how they can be used well, or badly, in writing.

You Don’t Know What A Mary Sue Is – Nobody Does

This is because it doesn’t appear as a term until 1997 in the article Star Trek Myth and Legends, and it doesn’t get its footing by ‘famous’ media scholar Henry Jenkins until 2009.[1]

In writing terms, this means every academic is still hot and bothered about what it actually means. Give it another 20 years and we’ll all agree, right?

Well, regardless, the origin story of Mary Sue is not well known. So, let us dissect that and produce a five-point plan.

Paula Smith, an editor for Menagerie, a Star Trek fan magazine created a 309-word story as a joke.

“Gee, golly, gosh, gloriosky,” thought Mary Sue as she stepped on the bridge of the Enterprise. “Here I am, the youngest lieutenant in the fleet – only fifteen and a half years old.”

This was meant to encapsulate the numerous bad fan fiction submissions she received from young girls.

Captain Kirk came up to her.

“Oh, Lieutenant, I love you madly. Will you come to bed with me?” “Captain! I am not that kind of girl!” “You’re right, and I respect you for it. Here, take over the ship for a minute while I go get some coffee for us.”

Clearly, playing to the wish-fulfilment of adolescent readers and fan fic writers.

Mary Sue then goes on to save the crew from some green androids and cure them of a fatal illness as well as win “the Nobel Peace Prize, the Vulcan Order of Gallantry and the Tralfamadorian Order of Good Guyhood[2]”

But, she dies tragically, like every angst-ridden teenager fantasises will happen to them, and her birthday becomes a celebrated holiday.

Also, she is half-Vulcan like Spock, which she hides from the crew.

So What Do We Have?

We have a protagonist:

This is obviously an intentionally poorly written story with no redeeming qualities. I mean read this:

“In the Sick Bay as she breathed her last, she was surrounded by Captain Kirk, Mr. Spock, Dr. McCoy, and Mr. Scott, all weeping unashamedly at the loss of her beautiful youth and youthful beauty, intelligence, capability and all around niceness. Even to this day her birthday is a national holiday of the Enterprise.”

Such a perfectly awful sentence deserves to be framed. Then perhaps burnt in a cleansing ceremony.

So Why Are Mary Sues Good Protagonists?

Ignoring all this, they are, mostly, very good qualities for your protagonist to have.

For example this is a nice fit for children’s fiction. Where you really should not have a needlessly dark tone and your hero should win the day. After overcoming some adversity obviously.

Your Harry Potters and Katniss Everdeens are toe-tappingly tragic. They have special powers no one else can compete with.

They have secrets and overcome all their tasks with help or alone.

Finally, they have bitter-sweet victories that save the world but at some personal cost.

Importantly, both are employed very gracefully in their respective world’s logics to make their achievements not feel hollow.

This formula has produced a variety of good books and characters. Think of comic book heroes, for example. Spiderman, Wonder Woman, and Ironman are all interesting examples of how to write a Mary Sue with substance while keeping a light tone.

James Bond is a perfect man’s man. He is deadly and irresistibly sexy. He swoops in to save the day just in the nick of time, every time. This trope of the perfect “Super Man” is a long standing tradition, dating (at least) back to Edgar Rice Borroughs’ Tarzan and Princess of Mars novels.

It is highly marketable. It is an acceptable power fantasy men have allowed themselves to indulge in. Yet, you never hear vocal fans calling for Bond to fail more often or be less capable.

I think that is largely because that is how this fiction is marketed. If you are up-front with the nature of your fiction, it’s difficult for people to argue it should be something else.

Which is why Bond films that lean in too heavily to drama and realistic action are often less successful.

If we look at Sterling Archer from the FX television show Archer. He is a spy who always ruins his missions through the abuse of Bond tropes, like excessive alcohol consumption, it would feel wrong if he suddenly became dependable after 9 seasons of failing.

We like Archer because he is a fun train-wreck of a man. We love Bond because he is a well-oiled, villain-killing steamroller. A compromise between the two simply ruins both genres.

Jane Austen’s Elizabeth from Pride and Prejudice is another wonderful example of a Mary Sue. Jane Austen, a notable recluse and spinster, created a fictional Jane who despite her, at times, off-putting and judgemental nature still manages to find and marry a rich, educated, and gentle gentleman. With whom she lives happily ever after. This is a perfect example of a Mary Sue wish fulfilment scenario.

Unlike Mary Sue, Elizabeth is clever, witty, and complex. Her personality is well-balanced and her achievements are more reasonable. Of course, she still shines in areas she in talented in.

Additionally, the lovely tentative relationship that grows in the book, between her and Darcy, is contrasted with the abused nature of Mary Sue’s “relationship” with Kirk.

Luke Skywalker is my favourite Mary Sue. He is, of course, based on the legend of King Arthur who was the original “Artie Stu”, if you will.

A common boy born to a legend. He will bring balance to the force.

He blows up the Death Star the first time he gets into his X-Wing.

George Lucas reportedly wished he was Flash Gordon as a child.

He has a big hulking father figure of a secret.

And, his darling flaw is that he just can’t kill his dear old dad because he sees the good in him.

This poster boy of a Mary Sue has captured the hearts of generations of fans. Fans who cried out in rage and were silenced when Disney decided to reverse these traits in an unfortunate series of events.

If I see another gif of that green milk drinking scene…

You know that one.

Regardless, for decades Luke has been a shining example of good to the world and we were all made a little bit brighter by his shining light[4].

The Many Talents Of Mary Sue: How To Employ Her Gainfully

By using Luke as an example, we can see just how this trope should be implemented: As the basis for strong, dynamic, fast-paced story.

Having a competent protagonist who can solve problems quickly will cut down on dead space in your writing. It should not be used in every situation. Flawed protagonists are interesting.

For example, Arthur Dent from The Hitchhiker’s Guide to the Galaxy by Douglas Adams never really passes any sort of test. However, it is possible to have your ‘hero’ fail as a way to progress the plot.

Important Tip: What a perfect Mary Sue should not do is create cringe-worthy moments.

In the latest Harry Potter universe movie, Fantastic Beasts: The Crimes of Grindelwald, the leader of the wizard world says to Dumbledore:

“It pains me to say because well I don’t like you. But you are the only wizard who is his equal. I need you to fight him.”

The plot should always have the illusion of choice. A book can only have one outcome, but several choices should be made available for it not to seem contrived.

For example, in the Star Wars movies we have seen that not only the main characters can save the day. Luke only blows up the first Death Star. The next two planet-killing weapons in Return of the Jedi and The Force Awakens are dealt with by side characters.

In fact, Luke largely fails at tasks in Return of the Jedi. His friends would have won the battle even if he had not turned his father against the Emperor. But, he still achieved a task only he could do.

This style of writing promotes a Mary Sue that is not obnoxious. A bad example would be Anakin Skywalker from the prequel Star Wars trilogy.

He is even called the chosen one, given a destiny, and the power to save anyone except his wife. On top of all of this, his dialogue is stunted and contrived and his character is neglected at the expense of a rapidly-paced plot.

Sueing it All Together

I hope I have shown you that a Mary Sue can be a positive term and even the best way of handling a main character. It is more than just a complaint or an example of bad writing.

Top Tip: Use our Character Creation Kit to help you create great characters for your stories. If you want to learn how to write a book, sign up for our online course.

by Christopher Mary Sue Luke Dean – perfect in every way.

P.S. For some more bad Star Trek fan-fiction why not try Star Trek Discovery? It’s my go to this-is-so-stupid watch of the week.

[2] Please let this be a real Star Trek thing. Someone comment if it is.
[3] She’s the Darth Plageus of fan fic in that regard. “Have you ever heard the tragedy of Darth Sue the Wise?”
[4] Sabre