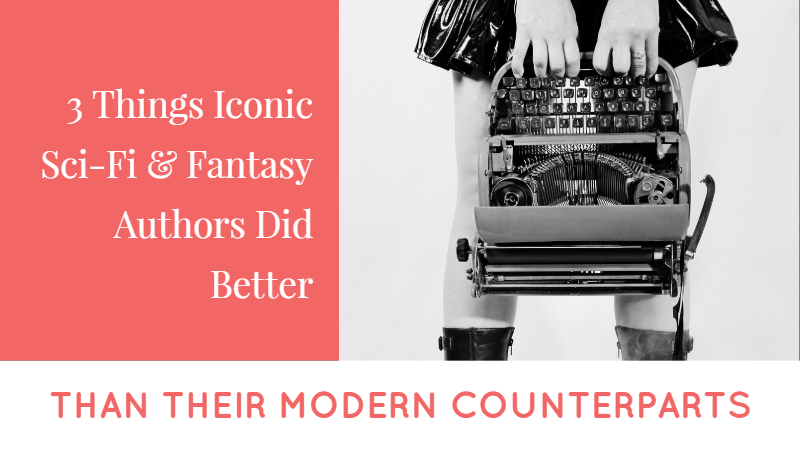 This post is about 3 things authors of The Golden Age Of Sci-Fi & Fantasy did better than their modern counterparts.

This will be a post on the great and terrible authors of the speculative genres of Science Fiction and Fantasy. I will be looking at them and their works from the angle of what makes them worth reading. I will also look at what lessons a modern writer could learn from them.

I want to look into the works of Heinlein, Clarke, Tolkien, Dick, Herbert, and Asimov and compare their styles with modern authors and even new imaginings of their own work.

I also reserve the right to change this list on a whim, or a flight of fancy at any time with no consequence. In fact I’ll probably talk about TV and Films as well so settle in for a bumpy ride.

Let’s look at the things the authors of the Golden Age of science fiction and fantasy did better than their modern counterparts. (You will find a list of the books we mention at the bottom of the post.)

Making the future into a place you would want to live was hugely important to an author like Arthur C. Clarke. He often assumed that logic would lead the worlds of tomorrow to reject the barbaric nature of our modern conflicts. Describing even post-apocalyptic civilisations as places any human would want to live.

In The City and the Stars, one of his earlier works set a billion years in the future, the stars are faded, the oceans of the earth are deserts, and the galaxy deserted after a catastrophe ended humanity’s golden age.

But one wondrous city remains populated by what seems to be the last remnants of human civilisation. But rather than a Mad Max death brawl for survival, it is a place of art and peace where people live out their allotted 10 000 years before being reborn to live new lives when they tire of their existence.

It takes a visionary who believes in the untold power of human creativity be believe that this Utopian existence is the worst possible most cowardly state of human life. He shows us that these are the descendants of the cowardly those who chose to remain small and hidden rather than explore the fullness of the universe and possibly even other dimensions.

In later modern views of the future, like Gary Gibson’s The Thousand Emperors, we see despotic rulers behaving like gods while other branches of humanity become so alien that they lose all sense of what it is to be human that they have to study humans in zoo-like environments. It is a vision of war and death stretching from now until the last stars flicker out of existence.

Robert A. Heinlein and J.R.R. Tolkien are both excellent examples of world builders. While Arthur C. Clarke and Philip K. Dick made very intellectually compelling worlds, they tend to rely to massive amounts of exposition where it leads of the majority of their works being two people in a room talking about the world.

Heinlein shows you the worlds he makes from the front seat of a rocket. He shoots his characters down to hostile world full of enemy bugs (Starship Troopers) or sells them off as salves only to have them rise to power (Citizen of the Galaxy).

Tolkien makes you comfortable. He asks you to sit down and have a drink. Maybe you’d like something to eat while he tells you an interesting fact about your great great uncle Bullroarer Too? Then he rips the chair out from under you, albeit this takes several hundred pages, and suddenly (metaphorically) you find yourself on the side of a mountain being rescued by magic eagles after defeating a dark power.

Tolkien of course uses magic and history to engage you and makes you feel as if his world is a real lived in place with its own culture and language.

Heinlein moves the reader from place to place contrasting them with each other. A man may be working on a farm or building his own spacesuit in modern America and then suddenly find himself whisked away to new world or different times. Dropped into alien cultures and forced to rethink everything they knew.

This all helps to build a mystery into the universe that can be explained simply by showing more and more of it until the reader feels like it starts to make sense.

This creates fun adventures like The Hobbit and Have Space Suit Will Travel but also leads to bizarre but endearing works like Time Enough for Love and Frank Herbert‘s Dune series, which is Lord of the Rings if Tolkien had had a bad drug habit and a strange fascination with cinnamon.

3. They Ended A Story

These books very rarely had the endless supply of sequels we have come to expect of modern authors (except for Dune where even Herbert’s death seemingly can’t stop them coming out like clockwork).

I suspect that that is because they were mostly designed to convey an idea. Philip. K. Dick’s The Man in the High Castle was simply, “What if we lost WW11?” Tolkien asks “What is worth fighting for?” While often Heinlein makes the reader believe “You’re only worth what you fight for.”

They are simple ideas expanded into a narrative. They are sparked into existence. They have their moment in the sun. And then the authors moved on to something else.

You might say that doesn’t make them better. And sure Discworld by Terry Pratchett was a series and that expressed dozens of ideas. I’d respond, yes it did. But Pratchett merely used his world as a shell to contain many different stories. Unlike say Raymond Feist or J.K. Rowling who produce book after book where the same ideas are reused and repackaged. We get it! Wizards can do magic. Please tell me something new.

That is not to say long form storytelling is without merit in Sci-Fi or Fantasy. It can be the perfect delivery system for building attachment to characters. Good example are Star Trek: Deep Space Nine where over the course of seven seasons one gets to know and love or hate the characters. Even better, Robin Hobb’s Farseer series is a world I spent twenty years engaging with over the course of several thousand pages. For my money and time, it is the most rewarding and well-crafted fantasy world ever made. (Assassin’s Apprentice is the first in the series)

Having said that, there is merit to moving on after you have said all there is to say. If you can’t, then it grows stale and contrived. This is easily seen in TV shows. Look at the new Star Trek and Doctor Who. Is there really any more to be said in those worlds? Is fifty years of continuity not enough? Why for instance did a short lived show like Firefly have such a disproportionate effect on fans compared to an underwhelming return to TV like the Star Trek Discovery? Perhaps even worse Solo, the last Star Wars film, seems to speak to beating a dead horse one too many time.

With that said, I said it and now it’s over.

Pick a copy of any of the books we mention in the article by clicking the links below.