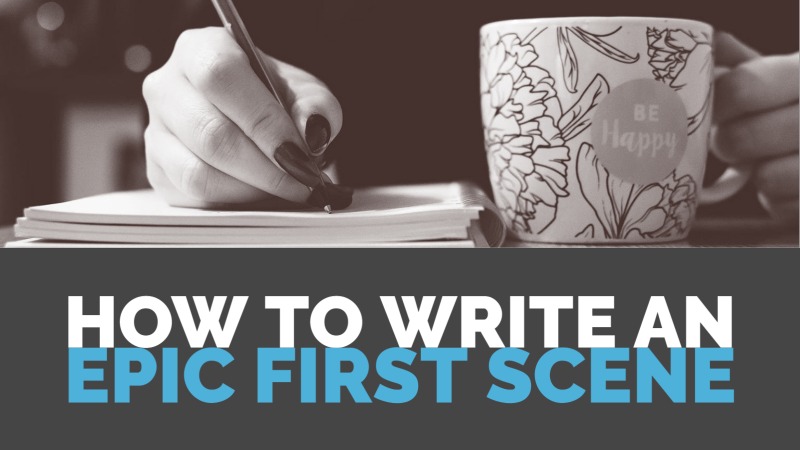 Do you want to write an epic first scene for your story? In this post, we tell you how to do it – with examples.

We’ve been discussing the importance of writing epic first lines and epic first pages, which lead us to how to write an epic first scene.

Read all the posts in this series here:

How To Write An Epic First Scene

The opening scene of your novel continues to build on the hard work you put into your first line and your first page. In order for us to discuss the first scene we need to be familiar with scene structure and manuscript layout. Remember to look at the opening scene. Not the prologue.

What Is A Scene?

A scene has a goal, a conflict, and a disaster. An action scene, which is usually what we use to  start a novel, has around 1200-1500 words, but a quick look at a few of the books on your shelf will show you how much variety there is when it comes to scene length. A simpler way to see where a scene ends is to find the break in the page.

When we use manuscript layout we do not put spaces between paragraphs. We put spaces (two line breaks) between scenes and chapters. To find the end of the first scene find the first break.

When we discussed the first page we tried to answer the following five questions:

The rest of the scene builds on this information.

The Formula For How To Write The Epic First Scene

The writer should include the following six elements in the opening scene.

Let’s look at the examples:

THIS POST CONTAINS SPOILERS – remember you can read these first scenes by going to Amazon. (Click the links below) then select the format and click ‘look inside’.

This is the only book that uses more than one scene in the opening chapter. The rest of the examples all have only one scene as the chapter.

Goal: put out the fire.
Conflict: Izzy set the house on fire with her mother inside.
Disaster: Izzy and the house are gone.

Significant line: She had planned to go over in the morning and check the rental house on Winslow road, even though she knew already that they would be gone.

2. Where The Crawdads Sing by Delia Owens

This story has two timelines. The prologue starts the present day story, but Chapter One jumps to the past.

3. Children Of Blood And Bone by Tomi Adeyemi

This is a YA fantasy novel. The setting plays a huge role and we are privy to more backstory than in the other scenes. Note the use of vocabulary to convey setting: ahéré, divîners, cheetanaire, magicite. This is a long first scene with lots of information.

Goal: to fight and graduate.
Conflict: the soldiers arrive and demand more taxes.
Disaster: she graduates, but something has happened to her father.

Significant line: They hate what you were meant to become.

I mentioned in the previous post that it feels like Chapter 1 should be a prologue, but it still does the job of setting up the goal.

Goal: to play, but Dad shows her a picture of a beetle.
Conflict: her bothers have died.
Disaster: she is in love with this beetle, but her father takes his own life.

(Most of this is backstory. In the next chapter she makes the decision to go find the beetle and places an ad to find an assistant.)

Significant line: Yet as her finger met the golden beetle, something happened; a spark seemed to fly out and her future opened […]She would go to wherever New Caledonia was, and bring it home.

5. The Silent Patient by Alex Michaelides

Goal: to find out if and why she murdered her husband
Conflict: she won’t speak.
Disaster: her only communication is through a painting. She painted the word ALCETIS – what does it mean?

Exercise: Analyse your first scene using the structure in this post.

Conclusion: as you can see there is a lot of variation with these scenes. Not everything is immediately clear or stated, but the important groundwork has been done. I hope this post on how to write an epic first scene helps you when you’re writing your story.