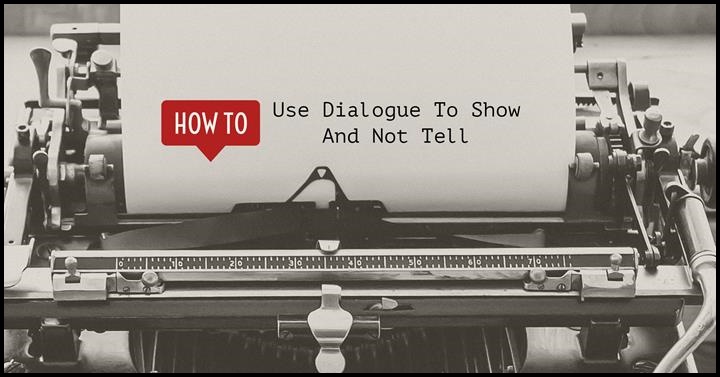 Writers Write creates resources for writers. This post will show you how to use dialogue to show and not tell.

At the end of last year I wrote a post titled 5 Incredibly Simple Ways To Help Writers Show And Not Tell. This week I want to discuss Tip 5 – Dialogue – in more detail.

How To Use Dialogue To Show And Not Tell

Writing dialogue might just be my favourite thing in the world and it is the simplest way to go from telling to showing. The moment your characters start talking to each other you have an action scene. A scene where things happen. You have movement. You have body language, you have them interacting with their setting. You have a scene that engages a reader.

You don’t really want to write about a guy lying in bed thinking about his day, do you? No, you want to write about a guy who wakes up, spills his coffee, drives into his gate, misses his meeting, but then meets the love of his life. You need action, and dialogue forces action. It advances the story, gives us much-wanted white space, and it helps us to show character.

Ok, so it is safe to say that Sarah and James do not have a healthy relationship, but can you see how much more you know about them after reading the second example? His OCD-ish tendencies? Her desperation?

Often we find our characters alone in a scene. Guard against this. Lengthy solo scenes will make you lapse back to telling. Make them phone a friend if it is physically impossible for them to be near someone. Make them talk to the barman, the waitress, the guy at the gas station.

Unless, of course, they are schizophrenic. Then let them talk to themselves.

[Remember that there are times when you should tell and not show. Follow the link to read more: 5 Instances When You Need To Tell (And Not Show)]

(You can also try our FREE COURSE: How To Show And Not Tell In Short Stories)