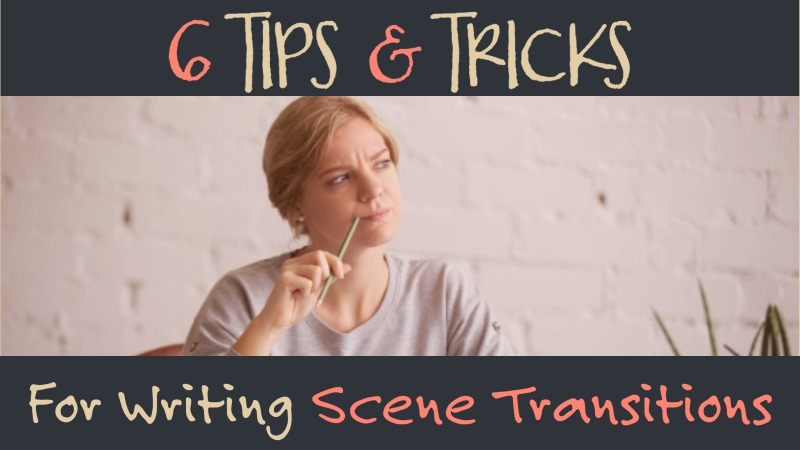 In this post, we look at six tips and tricks for writing scene transitions, with examples, in your stories.

Moving from one scene to the next is not just a matter of hitting return twice. How you end a scene and what happens at the beginning of the next scene influences the pace of your story.

The meaning of the noun, transitions, according to Merriam-Webster is the ‘passage from one state, stage, subject, or place to another’.

The word clearly indicates movement or change. Think about the transitions in your book as the links of a train that keeps the story moving.

The scene transitions we use in our stories are pacing devices, but they also help orientate the reader. We need smooth transitions because we do not follow our characters through every second of their day, not even in a short linear tale. Remember, I’ve said it before and I’ll say it again: what you leave out in writing is as important as what you put in.

Why Do We Need Transitions?

In a linear story, you do not jump around in the timeline and your scenes follow a sequential pattern, but you do not include every single second of your character’s life. You need transitions for the bits that you skip.

In a non-linear story, when we move between timelines, and even jump back and forth in time we need to re-orientate the reader every time. The transitions will help you do that.

Scene transitions also show if the mood of the character or the tone of the story has changed.

What Is The Scope Of Your Story?

Use your transitions to convey how much time has passed. A story that spans decades will jump past months and years. A story that takes place in a week or in 24 hours will skip minutes or hours.

When we move from one scene to the next we often change time, viewpoint, and location. The reader needs to be made aware of this without lengthy explanations.

1. Arrive late, leave early. This is a popular adage for writing. Your transitions will allow you to plunge the reader into the middle of the action. For example: He didn’t move; the tell-tale click of the gun gave him all the instruction he needed.

3. Establish the speaker as quickly as possible. When we start a new scene we need to know who the viewpoint character is. Their name usually works, but in first person this will need extra attention. Using dialogue is an awesome way to solve this problem.

For example: In third person:
The wind tugged at Angela’s hair.
OR
For example: In first person:
I stared at the waves, mesmerized by their consistency.
‘Janice.’
My heart stopped and I forced myself not to turn around. No one called me that anymore.

4. Establish where they are. If the setting has changed let the reader know. Sensory details are a great way to show this, but a street name will work just as well. For example: The cars buzzed and squawked as Harold waited for the light to change. He missed the quiet of his room.

5. Has time passed? The first few lines of a scene should give an indication of this. For example: He left when the leaves changed. They became liquid gold and melted on the cold ground. When they sprouted tiny green buds he still hadn’t returned.

6. Change of mood. The mood or tone of a scene can change and transitions are good for establishing that. For example: The candle sputtered in the pool of wax. She ripped the petals off the rose one by one.

Pay close attention to your scene transitions. They are not just sentences, but powerful tools that help speed up your story.