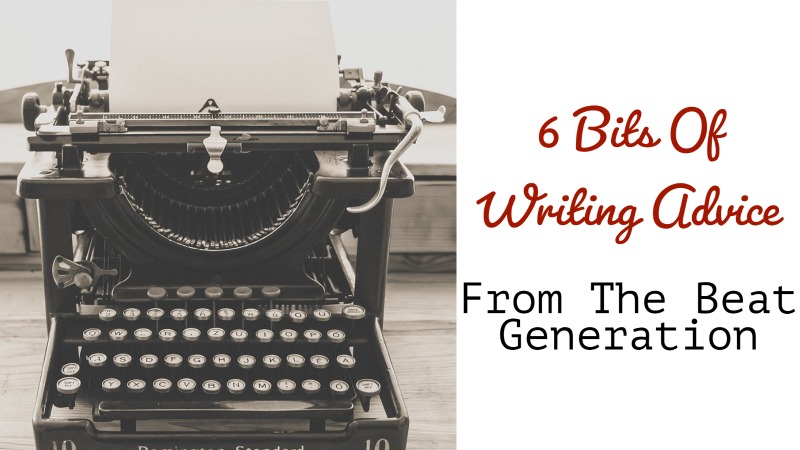 6 Bits Of Writing Advice From The Beat Generation

In this post, Writers Write explores bits of writing advice from The Beat Generation.

Who Were The Beat Generation?

The Beat Generation were a group of writers that rose to fame in the 1940s.

Their work explored themes that broke through the time’s status quo.

(Burroughs), On the Road (Kerouac), Howl & Other Poems (Ginsberg), and One Flew Over the Cuckoo’s Nest

Later, the Beat would inspire the next literary movement in turn: Gonzo.

6 Bits Of Writing Advice From The Beat Generation

‘Symbolism is alright in fiction, but I tell true life stories simply about what happened to people I know.’ – Jack Kerouac, The Paris Review

Kerouac’s work is discussed often, but the writer himself didn’t care for symbolism. He told true life stories, and interpreted what he saw.

If you write fiction, you should create such a good story that it could all have been real – but doesn’t necessarily have to be. Characters should live and act, even outside the page.

Practice: use 150 words each day, and describe something that you saw or imagined.

2. The Value Of Notes

That’s the first reason why you should, if you want to be a writer.

I’ll tell you a personal writing secret: any topic or idea can be fun when you let it.

Kerouac included this piece of advice in his famous ’30 Rules For Writing’, which he taped near his own space as a reminder. Other Kerouac-isms for writers from the same list are, ‘Be crazy dumbsaint of the mind,’ and, ‘Try not to get drunk outside yr own house.’

3. Say What You Mean

Developed tone and style are a writer’s own, though it will always take time and practice.

The Beat Generation allowed their style to shine. Beat writers often used a conversational, more profane writing style than ‘academics‘ of the time.

Ginsberg encouraged writers to say what they mean.

Now, writers could say four letters words in print, and they did.

Ginsberg’s ‘Howl’ would later become the subject of one of the most infamous obscenity trials in the United States.

‘It is important to support everyone who tries to write because their victories are your victories. So I have never really felt that bitter cattiness writers feel toward their peers.’ – Ken Kesey, The Art of Fiction No. 136

The Beat Generation rebelled against literary pretension and high-brow academia. But Kesey would also be fast to defend other writers at their craft. His advice was simple: be kind.

Support literacy, support new ideas, and support writers like yourself. Remember Kesey: be nice to other writers.

‘There’s no in-between with a novel. You either finish it and you get it published, or it doesn’t get accepted and you’ve failed.’ – Kesey, Ken Kesey’s Eclectic Writing Acid Test, Rolling Stone

Ken Kesey would begin as a writer, and later present writing classes to University of Oregon students.

This move would publish ‘Caverns’ under the pen-name O.U. Levon, or University (of) Oregon backwards.

The quote is Kesey’s words to students, with a clear goal: finish the damn thing.

Finish your writing. If not, it could be a great loss.

6. Don’t Get The Wrong Idea

‘As a child, I wanted to be a writer because writers were rich and famous. They lounged around Singapore and Rangoon smoking opium in yellow pongee silk suits. They sniffed cocaine in Mayfair, and they penetrated forbidden swamps with faithful native boys, smoking hashish and languidly caressing pet gazelles.’ – William S. Burroughs, High Times, An Interview with Burroughs

Sure, a writer can be rich and famous too… But don’t get the wrong idea.

Burroughs admits in a lengthy High Times interview that he thought, as a child, this is what writers do.

Then read the rest of the interview.

Burroughs spent a great deal of his career in trouble. He would skip bail on drug charges in New Orleans, and settle in Mexico City for several years.

Writing is hard, and you never know where the journey will take you.

The Beat Generation has inspired countless other writers. Hopefully, their words can inspire you.