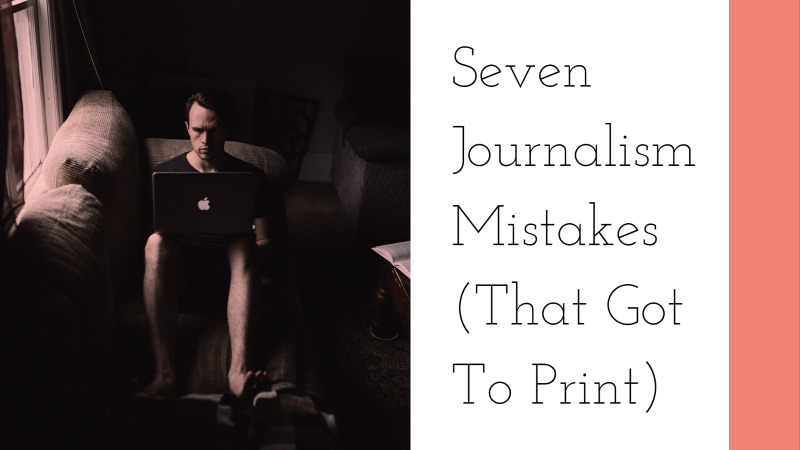 7 Journalism Mistakes (That Got To Print)

In this post, Writers Write will show you seven journalism mistakes (that got to print).

Writers and editors mess up too.

Online or print errors can be a laugh. Mistakes are also serious, even when they are funny.

The Guardian slipped out ‘irritable bowl syndrome’. The New York Times mixed up Jimmy Kimmel and Fallon, twice in one year.

Missed Steaks: How They Happen

Writers can stop most errors. Editors can prevent some others. If you see one, report it to the editor (even ones that aren’t yours).

7 Journalism Mistakes (That Got To Print)

Conspiracies are fiction as truth.

Myths become media when writers use secondary sources (or syndication).

Medical students tell of a prank gone wrong. The student who was found eating a cadaver’s arm in horror, put in her room as a joke.

These stories start as bad journalism. Repeat or share, and they spread.

Fake news can skew views, or cause panic. Urban myths can, at worst, even turn real if someone copies a headline.

Use Snopes.com to track news, fake news, and urban myth.

Snopes.com is one site that tracks news, fake news and urban myths.

News can publish too soon.

Newspapers can write several drafts for one event. If two results can happen, both articles stay ready.

‘Dewey Defeats Truman’ is one such example.

The Chicago Tribune used this as their 3 November, 1948 header… When Truman won the election.

Don’t race to be first. Research to be right.

When you rush a scoop, you miss important things like truth.

Always think about your next sentence.

Many sentences look fine once, but read wrong twice.

Don’t rush to get things done. Always read with care. Late deadlines and rushed stories cause flaws in good work.

Speed reading can also be blamed. The mind can fill in letters that aren’t really there (or delete some).

The Express Times would say: ‘Most homicide victims never talk to police”

Well, yes… Their mistake even made The Tonight Show.

The UK Express printed an image, with a story about a ‘cocaine-induced psychotic episode’ that left several people dead.

It was the wrong person.

The Express would print an apology. Unfortunately, the damage was done.

In 2019, The NY Times mixed up pictures of Jimmy Fallon and Jimmy Kimmel. The same year, they confused them again – it was Fallon’s joke, not Kimmel.

Mistakes can be funny, but also change lives.

Most typos are caused by speed (or stress).

It could be a missing letter, or misspelling. Typos can also make a sentence mean something else.

Typos get to print when both writers and editors err.

The Guardian once wrote ‘irritable bowl syndrome’. That’s one of many, from the same paper.

It can happen to anyone.

Journalists should track every quote at its root. Search until you find it.

‘In the end, it’s not the years in your life that counts, it’s the life in your years.’

The above is often quoted as Abraham Lincoln. It wasn’t.

It was still shared for his 208th birthday.

It can be knowing and blatant.

It’s one of journalism’s worst mistakes.

It has gotten many newspapers (and writers) in boiling water. It’s bad for everyone.

In 2018, EgyptAir Magazine ran an odd interview with Drew Barrymore.

According to Barrymore, it never happened.

The magazine apologized. As a cautionary tale, the damage was done.

Keep journalism clean. In this post, Writers Write showed some of the most infamous mistakes in journalism.

While to err is human, to edit is professional.