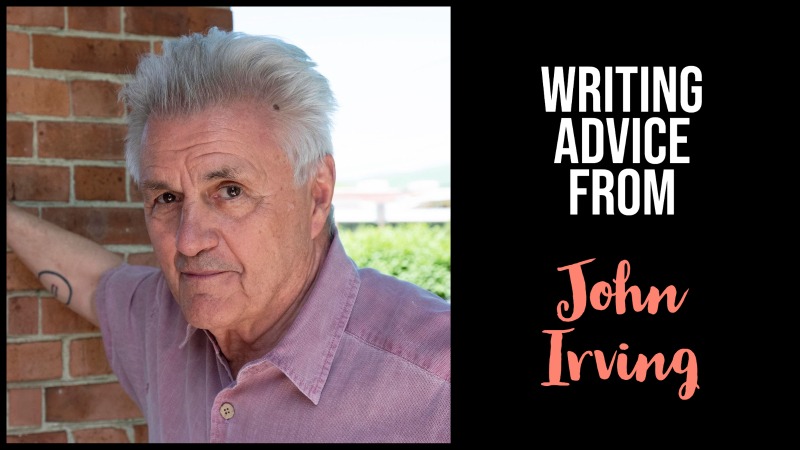 In this post, Writers Write shares bits of writing advice from John Irving, the American-Canadian author.

Who Is John Irving?

Irving has written more than 13 novels according to his website. Among them are, The World According To Garp, The Cider House Rules, and The Hotel New Hampshire.

Setting Free The Bears would, like many debuts, be largely ignored in its first print.

Publication of The World According To Garp (1978) shot Irving to sudden acclaim and royalties.

The next, The Hotel New Hampshire (1981), would sell better as a result.

Today, John Irving is a household name. Several of his novels have been adapted to screen, many of them by the author himself.

He is working on one more novel at the time of writing, to be called Darkness As A Bride (or The Last Chairlift).

Here’s what you can learn from the advice of John Irving.

‘I feel like I could have written one novel in the time I’ve spent in a car.’ – Hazlitt Interview, 6 June 2016

Use your spare time and write.

That’s how writers get things done.

Try longhand writing at least once. If you are stuck at the keyboard, change your method and be inspired again.

This has worked for Irving, but also for others. King wrote Dreamcatcher entirely in longhand while recovering from his infamous car accident. All 216 602 words of it.

3. Know What Becomes Of People

‘Novels are plot and character-driven, so if I don’t know what becomes of people, how should I know where to begin?’ – Guernica Mag Interview, The Future Perfect

We don’t remember the furniture when we think about books. We remember the plot and the characters. Buffalo Bill, Sherlock Holmes, Ayla, Richie Tozier: what do you remember about these people and these books the most?

Use your characters to tell your story, drive your plot.

Irving has often said that this, his characters’ fate, is his starting point.

‘Writing a novel is actually searching for victims. As I write I keep looking for casualties. The stories uncover the casualties.’ – Writers At Work Eighth Ed.: The Paris Review Interviews

Kill your darlings, said another.

Writing is about creation, but also about the rest of it.

Writers have a unique power that allows for them to bend reality on the page. It’s a shame to ignore such a power.

Outlines can keep writers on track.

Unless you enjoy being dazed and confused, use an outline to find out where your characters are going.

Scene, chapter and final story endings should be put on paper first.

If not, your work is a treasure hunt without a map.

Plan ahead, and you won’t get lost.

‘Half my life is an act of revision.’ – Trying To Save Piggy Sneed

To write is to type, but it is also a hundred other things at once.

Good work (and Great Works) are not just vomited on to a page in a matter of minutes.

Irving admitted that half his life is spent at revision.

It’s almost guaranteed that you will spend more time editing your work than writing it. If you don’t, it’s not done yet!

‘A writer’s job is to imagine everything so personally that the fiction is as vivid as memories.’ – The World According To Garp

As you write, you should see your story unfold before your eyes. If you can’t, how will the reader see what happens?

It’s important to tell a visual story. Show, don’t tell, as the old adage has to say about it.

Irving encourages writers to imagine as though they are part of their own story.

I hope you enjoyed these bits of writing advice from John Irving – and that they help you with your stories.