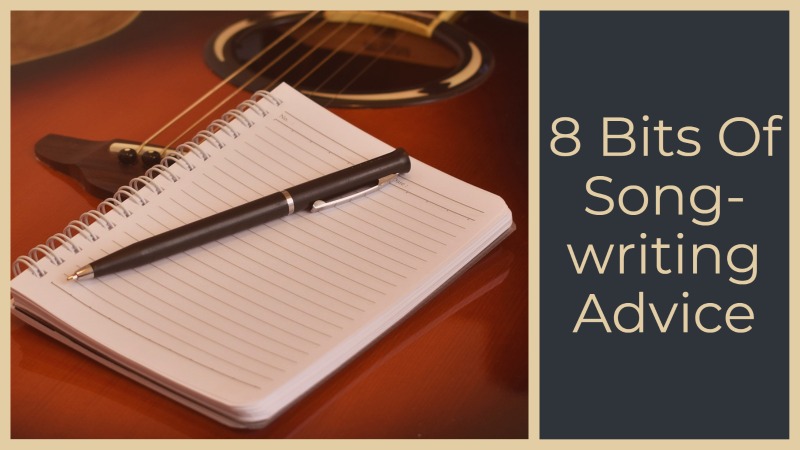 In this post, we look at eight bits of songwriting advice from bestselling songwriters.

If you can write an email, you could write a song.

Songs are universal. Music and rhythm are part of (almost) everyone. We all, deep down, know what we find soothing, sexy, or catchy.

‘I’ve always got a notepad everywhere. I do my best thinking when I’m travelling. I can write anywhere, and I never know when a song is gonna hit me. I write a little bit of something every day. Either an idea or a title, a few lines.’ – Dolly Parton, Rookie Mag Interview 2017

Songs are spontaneous things, so are most writing ideas. Record and keep your ideas. Turn these, later, into songs or stories.

Professionals seem to produce a hundred good ideas a minute: only daily practice can do this.

‘I just try and create a sort of a flow of words that somehow fits with the best melody for the tune or the best expressive feel for the vocal, plus I’m trying to link it to what the music itself is making me feel.’ – Matthew Bellamy, Interview With Kerrang 2019

Songwriters have different opinions and methods. Matthew Bellamy from Muse revealed that he prefers to link emotion to music, and then flow into lyric writing from there.

Some writers write, then listen. Others listen, then write.

‘Songwriting is about getting the demon out of me. It’s like being possessed. You try to go to sleep, but the song won’t let you. So you have to get up and make it into something, and then you’re allowed to sleep.’ – John Lennon, Chicago Tribune

All artists can describe The Urge.

The Urge to create something from nothing drives us. It’s hard to ignore, this pressing urge.

John Lennon describes having to get this ‘demon’ released before he could sleep.

‘For a songwriter, you don’t really go to songwriting school. You learn by listening to tunes.’ – Tom Waits, NPR Interview 2011

While there are courses, no amount of education guarantees you’ll create a hit.

Songs sell because they have hooks. Songs perform well when they trigger emotions: loss, empowerment, love, or fury.

You’ll only learn this when you listen, like Waits says.

‘I write very fast. The lyric part of it comes in one clump. I like to leave the lyrics for the very last possible minute and then just sit down and, zap, go through them. Just take each song and put a lyric to it, put it away.’ – Lou Reed, An Interview With Bruce Pollock

Lou Reed wrote some of his best lyrics in a rush.

He’s not the only writer to do it. Dolly Parton and Bob Dylan have said the same.

Open the tap, and let it flow at first. Leave edits for later.

The best thoughts are caught in motion, like panning gold.

‘I just keep mining issues that I have from thirty-two years of life. Sometimes the issues are more recent and sometimes they’re a little older, but thank God I haven’t run out of things yet.’ – Shaun Morgan, Ultimate-Guitar Interview 2011

Shaun Morgan writes from his own life. That’s not always necessary for a good song. Life stories can be fictional too.

Life is still life, and life makes for a damn good hook.

‘The best ones are written very quickly. The longer it takes to finish the song, the more difficulty it takes to to pin it down and focus on it and lose your original intention. I’ve done that a few times. I sort of just leave these songs go.’ – Bob Dylan, Interview with 20/20 In 1985

Catchy hooks and popular lyrics are best when they’re thought up at speed.

If you think too much, songs can get too complex. More syllables, one more line, and eventually, you have paragraphs.

8. Start, Sometimes, With A Title

‘I always start with a title. Well, 90 percent of the time… and then work in usually from the title. I listen for everyday phrases, ’cause language is so rich. I mean, I swear to God if people wanna think of what, how to write a song, just really listen and I guarantee you’ll hear 10 phrases a day that are amazing phrases.’ – Jim Steinman, Classic Albums Six Hour Interview

Bat Out Of Hell, Two Out Of Three Ain’t Bad, Heaven Can Wait.

Steinman said that he starts with titles. Not all writers do this. Many find it easier to ‘lock down’ their core idea.

I hope these eight bits of songwriting advice from bestselling songwriters help you when you’re writing songs.  Practise, and you’ll find your easiest process.