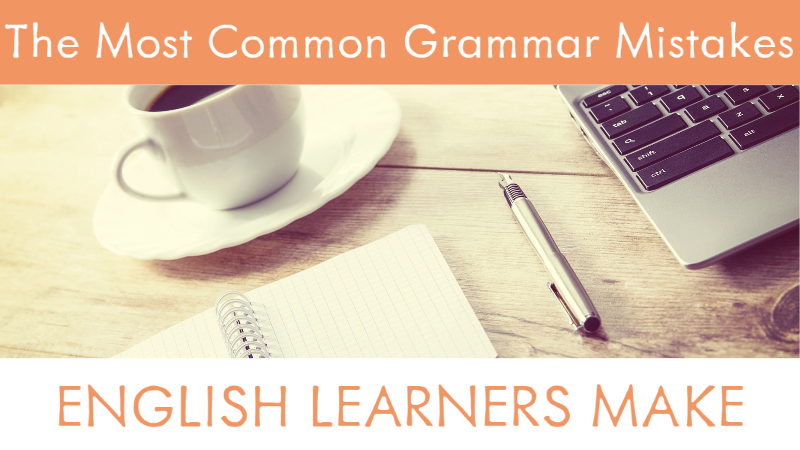 Are you an English teacher or a grammarian? This article is about the most common grammar mistakes English learners make.

This will be a good resource for English Second Language teachers or people trying to improve their English.

Here are common grammar mistakes English learners make. You should be aware of them if you are trying to improve your English.

[Top Tip: If you need practical help with your grammar, buy The Complete Grammar Workbook]

You can add numbers to countable nouns.

This is because we don’t measure these nouns by number. You cannot say “one flour”, but you can say “one bag of flour”. You could also say, “I want one kilogram of flour.”

How do you know if a noun is uncountable?

Well, with flour, it’s easy, because it’s a powder and all powders are uncountable.

You can’t give “two advices” to a person but you can give them two pieces of advice. In the same way, you can love or respect a person very much, but you can’t “ten respects” them.

“I drove the car to see the reindeer.”

New English speakers, especially if they are Asian, often leave out the articles “a” and “the”.

They would say “I drove car to see reindeer.”

This sounds weird in English. English needs to be precise. You must always have an article before a noun or a number. Without an article we would not know if you were talking about one reindeer or one hundred reindeer.

Also, if I say I drove “the” car, I know that it is the normal car I drive. If I drove “a” car, it could be anyone’s car. In fact people might ask you, “What happened to your car?” if you say that.

Read: Grammar For Beginners: All About Articles

Because English needs to be exact, you need to use the correct preposition. If you don’t, your sentence will sound wrong, or worse, mean something different.

There is no simple rule here. You just need to know what each word means and how it is used.

Read: Grammar For Beginners: All About Prepositions

Most languages don’t change the word order for questions, but, like most European languages, English does.

This not only affects how you ask questions, but how you answer them.

Question: “Did you go to the shops?” (Note it also gets a “question mark”.)

You should not just say “I went to the shops.” or “I went.” It’s not wrong, but it does sound rude. Using “did” acknowledges the other person’s question. It tells them that you are addressing their question and not just making a statement.

“Shopping” is correct. You cannot say “Did he shopped?” It’s not a correct English sentence.

You can say “He did the shopping.” or “He went and shopped.” or “He shopped.”

But, in this case, “shopping” becomes a noun called a gerund. This mean you have to treat it like a noun. You can tell because shopping has the word “the” in front of it and we only use “the” with nouns.

On the other hand “Yesterday, I shopped.” implies a shorter, less involved type of activity. It is like buying one pack of gum versus spending the whole day at the mall.

6. Confusing Its and It’s

Normally an apostrophe “s” means that something belongs to someone. For example “John’s car” is the car John owns.

However, with “it”, it is the opposite.

You can’t use “its” with people. You can only use it with animals and objects or legal entities like companies.

Even English people get this confused. I don’t know why, but they do.

“Lend” and “borrow” have their own prepositions to make it even easier.

Additionally, both “lend” and “borrow” indicate that you will give the object you borrowed back to the person you borrowed it from. “The son gave the borrowed money back to his father.”

The infinitive indicates that a sentence has additional information outside of its normal structure.

This is relatively simple in English. Everything in a sentence must have the same number.

“That and this” are singular while “those and these” are plural.

Except, we don’t do this for money or seconds.

Lastly, all of these are singular: each, everyone, everybody, anyone, anybody, somebody, nobody, someone, none, no-one.

Even though they are talking about “everyone”, the “one” indicates that all the people are “one” singular entity and not many different people.

English learners often say, “There are 10 childs/childrens at the school.”

This is wrong. It’s correct to say, “There are 10 children at the school.”

Plurals in English don’t make sense. Most of them are derived from a mixture of Latin and Germanic sources. Because child come from Dutch, we add “en” and not an “s”.

Some words, like sushi, don’t have plurals because they come from languages that don’t use plurals. English mostly follows the custom of the language that the word comes from, but not always.

Back then English did not use the “s” to mark a plural. It changed the sound of the last vowel of the word to a slightly higher tone. So foot moves up in pitch and becomes feet.

It’s really quite a mess and there is no clear rule that indicates how you should address this. The only method that might work is looking up the root of each noun. If you can find which language it comes from, you can guess how it will be made into a plural.

However, in some cases like “cactus” and “virus”, which should be “cacti” and “vira” if you use the Latin, we often say “cactuses”, and we always say “viruses”.

So, it is best to check in a dictionary if you are not sure.

This is for English speaker as well as learners. It’s not so much a rule as something that irritates me.

There is never any reason to use the word “myself”.

In 31 years I have never found a reason to use this.

If English lost the word “myself”, it would not be affected in the slightest way.

The only reason to use “myself” is if you want to sound casual, or to soften a sentence. By itself, it has no grammatical worth.

Myself is a difficult word to use for Second Language Learners, and, since you don’t need it, I would avoid using it.

We hope these common grammar mistakes English learners make help you with your writing.

[Top Tip: If you need practical help with your grammar, buy The Complete Grammar Workbook]

by Christopher Luke Dean (Dangling participles as a way of life.)