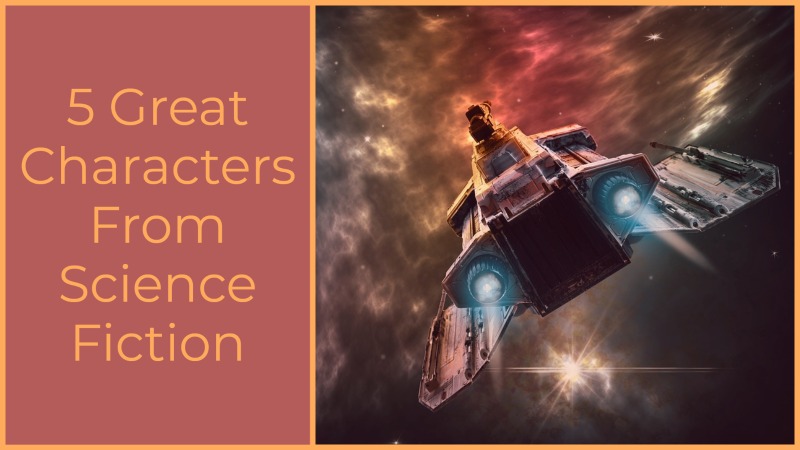 5 Great Characters From Science Fiction & What They Represent

This article is about great characters from science fiction and what makes them great.

We will talk about some of the best examples and list several others for comparison and reference.

This is not in any particular order.

5 Great Characters From Science Fiction & What They Represent.

The Starship Captain. – A true staple of science fiction.

They represent the adventure of commanding a ship far from home, exploring new planets, encountering strange phenomena, and relying on their own judgments in difficult situations.

It is also somewhat of a romantic fantasy calling back to an age of discovery when our maps had large empty expanses ready to explore.

Captain Sisko may not be the obvious choice for most people, but he is one of the more interesting captains. He not only has to manage his ship and a whole space station (DS9) but is also thrust into a difficult position as a holy figure for an alien people.

This and the fact that we see him earn his commission to the rank of captain gives him the most rounded portrayal in this role. We see this out of the many other captains we see in Star Trek and other space shows.

He is not a perfect figure either. He struggles to do the right thing and can compromise his ethics when the ends justify the means. He also has a complicated family life and his personal problems interferes with his job on numerous occasions.

But, he overcomes these issues and is ,at the end of the day, a model of integrity during a time of war and moral grey areas.

Another personal favourite captain of mine is D’Argo from Farscape because we get to see him gradually earn the respect of his crewmates and, over time, we see him grow into the role.

The Doctor is a Man Out Of Time. He is an explorer who uses a time machine to explore and sometimes alters events in the past or future.

This character represents curiosity and resolve. The Time Traveller archetype is a person who either wants to protect their timeline to ensure some desired future or a person who wants to change the past to prevent a particular future.

The doctor is also not necessarily a good person. Sure, he does not go around killing people, but he often allows bad things to happen. And, part of the plot is that tragedy follows in his wake. Meaning that the people he meets are generally doomed from the moment they see him.

Time travellers also fall into the explorer category. The implication of time travel means that even the same place can be very different in the past or far future. See H.G. Wells’s The Time Machine.

The Doctor is the most well-known time traveller in Science Fiction. He has been a household name for generations at this point. And with the unique trait that his species changes shape every so often he can be played by a new actor and the show can modernize accordingly.

This also causes controversy in the viewership. Which can be a good or bad thing depending on if you agree with the casting.

This keeps him fresh and if you don’t like the current one, you can just wait a while and hopefully you’ll like the next version better.

Being a light-hearted take on time travel, there is not any real science in this fiction and so if you want harder science fiction, you should look elsewhere.

The Madman From Earth

This character is almost always male and from a version of Earth that the audience can identify with.

They only sticking point is that they need to be human, male, and from Earth.

Now there is no reason that they need to be men. I just can’t find a female lead character that fits this role. Please let me know in the comments if you know of one.

This character represents calm considered thought and a balance of emotion and logic.

They try to centre every action they take and deeply consider the consequences of their actions.

They are used to teach the protagonist lessons and to prepare them for upcoming challenges.

Yoda is more that he appears to be. He may be small and frail but he has a wealth of experience and knowledge from a long, very long, life.

He reminds us that not every task is to be charged at head first.

He shows us that we must understand ourselves if we are to avoid the mistakes others have made and that the consequences of poor preparation are almost always failure.

These types of characters are a welcome addition to science fiction which can suffer from either a surplus of hot emotion, see ST Discovery and Dark Matter(although I think it fits this show), or it can be too sterile and logical, see Space Odacy:2001 or Foundation.

They always inject a good amount of soul into the universe of otherwise ‘Hard Science Fiction’ and can show us that the world your characters live in is vibrant and complex.

The wise barkeeper from The Next Generation, Guinen does the same thing. That is she provides long considered perspective of a person who has seen it all before.

The opposite of the sage is the Overly Logical type.

They represent an extreme view of science fiction. A world where emotion is a weakness and only hard science and provable results have any merit.

Now this can be done in a fun way like with Spock, or a mildly horrifying way like with the Borg. It is a favourite trope of SF and a sure fire way to add flavour to your plot.

And, many people find them very appealing. Spock’s fans are numerous because they love his over the top logical leaps.

To his fans his calm nature and soft spoken way of confronting the world is so radically different from their day to day lives, that it is refreshing.

Of course, Spock has emotions as do all Vulcans. He is just hiding them. Other Characters like Nagato Yuki and Data may not, at least not at first.

Isaac from The Orville is a character truly without emotion and is only interested in humanity for research purposes. His actions are not good or bad, merely logically dictated. He can be very unsettling.

The draw to these types of characters is how we read our own emotions into them. They are a blank slate that we can project onto, which draws us in like an obsession.

In essence, it is like solving a riddle that does not exist. Endless, but often enjoyable.

On the other hand, you get types like Thrawn from Star Wars, blue guy red eyes you can’t miss him, who has emotions and even gets angry. But, he is able to control himself to a super human (Chiss) like level. This allows him to apply his logical strategies to every battle and social interaction to achieve his goals.

This list could have been much longer and I would love to hear what characters you think should be here as well. Please let me know in the comments.

Just remember a good character is one you like to think about even after the screen fades to black or the last page has been turned.

We hope you enjoyed these five great science fiction characters and what they represent.

If you want more on this subject, read: