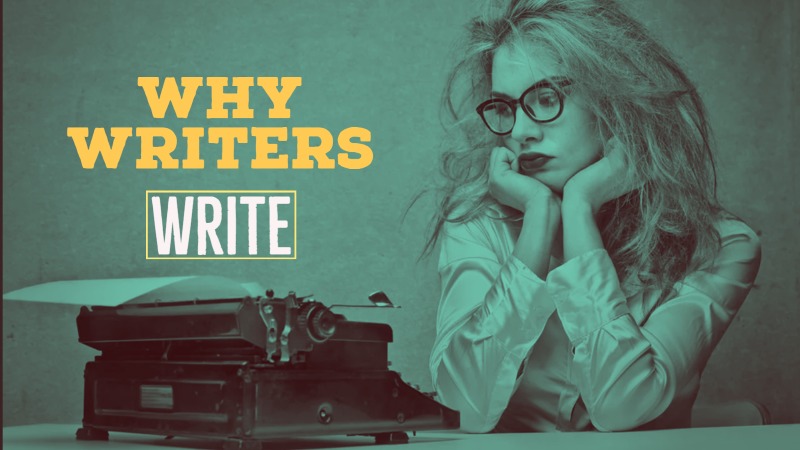 Why do you write? In this post, we look at why writers write and include excellent examples for each point.

This post is a look at the different motivations that cause us to put pen to paper.

Why Writers Write – According To Orwell

‘All writers are vain, selfish, and lazy, and at the very bottom of their motives there lies a mystery,’ wrote George Orwell in ‘Why I Write’.
‘Writing a book is a horrible, exhausting struggle, like a long bout of some painful illness. One would never undertake such a thing if one were not driven on by some demon whom one can neither resist nor understand.
For all one knows, that demon is simply the same instinct that makes a baby squall for attention. And yet it is also true that one can write nothing readable unless one constantly struggles to efface one’s own personality.’

Orwell’s classic essay touches on a fascinating contradiction at the heart of the writing impulse.

We write to hear ourselves think, to attract an audience, to work out our demons.

At the same time, the writers we love are able to move, entertain, and comfort strangers. They show powers of empathy and imagination that seem the very opposite of selfish.

Orwell identified four motivations that he believed lie in different combinations in every writer’s heart:

I thought it would be interesting to update this list by quoting a few famous authors, and asking a range of contemporary writers (see details at end) about why they write. The key impulses which emerged might be summarised as follows:

Creative joy emerged as the key motivation, and could often be traced back to childhood.

Writers can use fiction as a way to make statement about injustices or perceived wrongs in the world.

3. To Make A Connection

Writers use writing as a way to feel connected in a fragmented world.

Writers write to feel a release – a way of working through their issues on paper.

5. Because Of A Compulsive Need To Write

Some writers write because – however hard they find it – it’s not as hard as not writing.

Most of the writers I spoke to put the prospect of making money very low on their list of motivations.

I hope this post on why writers write inspires you to carry on writing – no matter the reason you write.

About the up-and-coming writers: