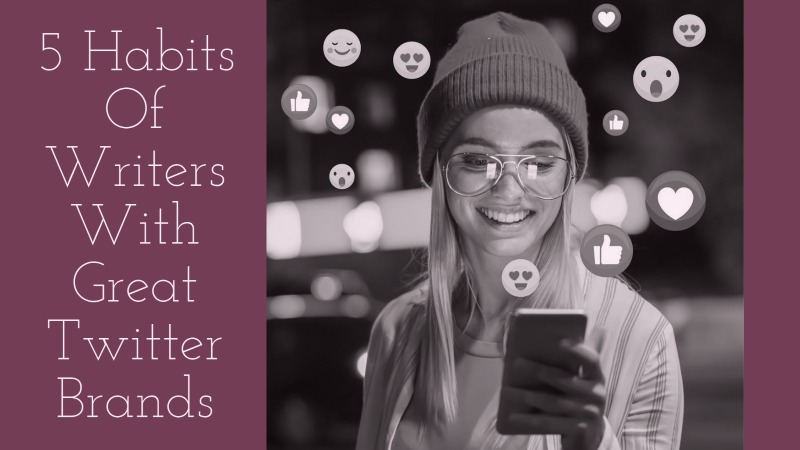 The word ‘brand’ is much over-used. Some people say ‘brand’ is synonymous with ‘reputation’. Others say a brand is like a ‘promise’.

Both could be true.

For example, a story that’s ‘on-brand’ for Stephen King would (for me) be full of suspense, subtly gripping, perhaps with a hint of the otherworldly. That’s what I’ve come to expect from King, that’s what he promises me. But I don’t know all his work, and others may see him differently. That’s OK too, because a brand is an impression, a matter of perception, not a cut-and-dried concept. An author doesn’t own their brand, other people do. And their perceptions may not be completely uniform.

In this article I want to look at some of the writers I enjoy following on Twitter. I hope to try to understand some of the things they say and do that make me like them.

So by ‘brand’ here, I really just mean the idea or impression I have of a writer. I don’t know any of them, so this impression is just built up from the things they tweet and the books they’ve written.

I don’t think you could say anyone has a bad author brand as such. It’s more that some writers are more interested in connecting with their readers in this way, more willing to share some of their thoughts and personality. Some enjoy it more than others, and are more willing to devote time and thought to it.

But it’s not for everyone – being anti-Twitter probably hasn’t harmed Cormac McCarthy: 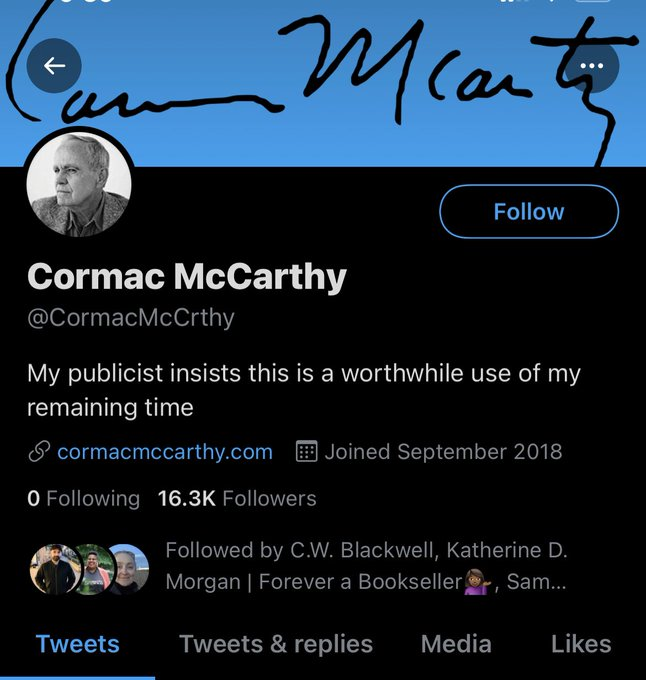 In fact, it turned out that this was a fake, and McCarthy isn’t on Twitter. But the debate it provoked shows just how strong his author brand is. To use another phrase he’d probably hate, not being on Twitter is very on-brand for Cormac McCarthy.

It’s hard to single out habits or characteristics because most of the writers I mention do lots of these things at once. But here anyway are a few thoughts and examples…

1. They Dare To Be Funny

Why do we laugh? One reason is that trying to be funny involves a real element of risk-taking – the risk of not being understood, of being judged, of being found unfunny. This is something we all dread so much we actually call it dying.

So when someone dares to take that risk, our laugh is a gasp of admiration and relief. Very often, the comedy-maker has said something we were all thinking but didn’t dare say. A great example of fearless humour is Rob Palk, a prolific tweeter and author of the very funny comic novel, Animal Lovers.

Not everything Palk says may tickle you – some of it goes over my head, frankly – but he is sharp and quick, unafraid to try things and always on the verge of going too far. Sometimes he is silly, sometimes smutty, sometimes erudite. He is one of the few Twitterers who can make me laugh out loud. Lots of his humour has a literary flavour too, which I enjoy.

Another thing Palk is very good at is getting others involved in the joshing.

Occasionally his friends will tweet to remind him in various ingenious ways that he is the greatest novelist of all time, and he will deal with these sarcasms with his customary self-effacing grace.

2. They Boost Their Favourites

Writing Twitter is full of people talking about their own books and stories (ahem) so it’s always refreshing when an author focuses on other writers instead.

Travis Cravey is much admired for his lean, yearning, emotionally gritty flash tales (recently collected in Manifold; sample: ‘There is a weariness in being lonesome that drains you’).

In his tweets he comes across as no-nonsense and down to earth, frequently baffled by the slings and arrows of daily life.

He boosts other writers, he is fierce in his enthusiasms (music, poetry, family, rude-looking food) and he often shares the travails of the WIP. I picture him – this man I know not at all – as a sort of grizzly bear: the kind of person who might grunt at you on first meeting, but a few hours later you realise you’d trust with your life. There is a compassion and humanity about him that people can’t help warming to.

Another thing he likes to do is read out poems, in his gravelly Texan drawl.

All in all: a lot to like. There is a Travis Cravey cult out there – complete with ‘Je suis Travis Cravey’ T-shirts. I don’t fully understand it yet, but I want in.

3. They Get People Energised

This is hard for many writers, who may feel uncomfortable or ill-equipped to get into the marketing side of things.

Horror writer, Gabino Iglesias, author of Coyote Songs, is always finding ways to support other writers and create spaces for them to promote their work. He organises anthologies, judges competitions, sets up collaborative Twitter fictions and encourages people to plug their work.

He is an endlessly energising presence on Twitter, always pushing the rest of us to keep going, dare to do our best, and not be afraid to shout about it. He shares lots of photography and art, and I always enjoy his InspiroBot posts too.

I love the tweets of Amber Sparks, author of And I Do Not Forgive You because they are just always so interesting, funny and engaged. I watch TV shows she mentions, I learn from her observations, I smile with rueful recognition at her childcare stories, and I’m always inspired by her fierce compassion. Thanks to her, for example, I discovered the LuLaRich box set, and learned about its noxious appeal to stay-at-home moms.

She is frank, self-revealing, even confessional at times. She is politically engaged, and trenchant in her concern for others. And she also often reflects on the craft of writing and her own current challenges with work.

Other writers who are similarly compelling to me because of their candour would include Stephen King – another author not afraid to get political.

These writers have a lot in common:

But not everyone is comfortable with tweeting frequently or revealing lots about their private lives. Also, Twitter can get quite heated, especially where politics is involved. And there is no point spending hours on the platform at the expense of your actual writing!

[Extra Reading: 3 Ways Too Much Social Media Can Hijack Your Creativity]

So there are of course no rules about any of this. It’s just a matter of finding your own way, finding the right balance. Dip a toe here or there, use a hashtag, and see what works for you. Over time you may want to get more involved — or less. So long as you feel comfortable, and don’t feel you are straying from who you are, it’s all good.

by Dan Brotzel. Dan is the author of Hotel du Jack, a collection of short stories, co-author of Kitten on a Fatberg, a comic novel-in-emails about an eccentric writers’ group, Work in Progress (Unbound), and The Wolf in the Woods.