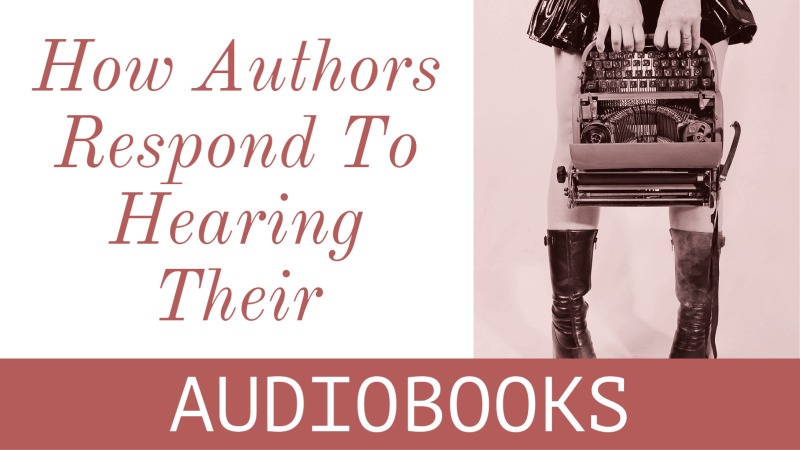 Audiobooks: How Authors Respond To Hearing Theirs

In this post we explore the experience authors have hearing their books narrated as audiobooks for the first time.

Writing a novel is an intense but very private experience. So how does it feel to suddenly hear your words in audiobook form – narrated by another, for all to hear?

Writing a novel is a largely solitary occupation, with the author spending months or years secretively working away at their words. All that time, the story lives rent-free in your head and pretty much nowhere else. Even when you’re not actually writing, plot points and character issues can preoccupy your waking hours to the point of obsession. It is a vividly immersive but largely private experience.

So it’s an odd feeling to hear those words you spent all that time quietly slaving over spoken out loud.

Having recently experienced this myself for the first time – and as a big audiobook fan – I was interested to find out how writers feel and think about this. So I thought I’d ask around…

Audiobooks: How Authors Respond To Hearing Theirs

Not What You Had In Mind?

One common fear among writers seems to be that the narrator will not do justice to the story that was in their head. Writers often don’t have much say in the narration either. Though they may be offered a sample to approve, they usually won’t be able to edit or revise the final product.

‘I have had several books of mine turned into audiobooks,’ a prolific YA author tells me anonymously. ‘I’ve stopped listening to them because they never sound anything like what I had in my mind.’

Others, however, are more fortunate – and many discover new riches in hearing their words read out by a professional voice. ‘My book The Long Lost War narrated by Jack De Golia was actually better than I hoped,’ says author Jeff Walker. ‘I was worried it wouldn’t come off the way I imagined it in my mind. But he did a very well-read performance of the novella.’

Getting The Main Character Right

Paul Braddon had a particular interest in hearing the narrated version of his subtly dystopian novel, The Actuality. It’s told from the point of view of a near-perfect bioengineered human in a broken-down future England where her kind has been outlawed.

‘For me, choosing the right voice to narrate was essential,’ he says. ‘The novel is written in the third person from the point of view of a character who has little experience of the world. But she is curious – and when faced with difficulties, discovers an inner strength. My worries immediately disappeared on listening. But my narrator Eva Feiler has beautiful articulation, which is perfect for imparting the necessary sweetness and otherness to bring my character to life.’

In the case of my new novel, The Wolf in the Woods, the main character (Wolf) has a hard-to-place accent that is part Cornish and part German. Only when I heard there was to be an audiobook version did it occur to me that this could be quite a tough challenge for an actor. But as Wolf is pretty much the core of the book, I was pretty nervous when I first played the recording.

But I needn’t have worried. Narrator Andy Cresswell gets the Cornish/German combination into every single sentence of Wolf’s. He adds a kind of old school Hammer Horror twang as well, and the effect is joyously spot on.

Even if the narrator may get to grips with the main character, however, there’s another challenge. They have to handle the secondary characters, as most audiobooks are narrated by a single person.

‘I had more bouts of trepidation as to how the other voices would be handled,’ says Braddon. ‘But Eva Feiler was especially successful with the other female voices. There was one particular passage in which two characters talk at cross purposes and the reader has to make sense of the underlying truth to understand events. It was a difficult scene to write but when “acted out”, it really came to life.’

Braddon discovered new layers of interest in hearing someone else give words to his voice too. ‘Eva’s interpretation was not always the same as mine. Not every character was exactly as I’d imagined them and this at first was a jolt,’ he says. ‘But by “acting” the characters’ spoken lines, she brought her own layer of creativity.

‘For example, one male character for instance sounded much older and more frail in the audiobook than I intended, but he was still done well. I find it is usually that female narrators are better with the female voices and less good with the male ones and vice versa for male narrators.’

Doing It For Yourself

Having to read extracts from The Actuality for promotional events has given Braddon a new admiration for the narrator’s art. ‘I know now just how hard it is to even manage a few hundred words without tripping over a line! I’m in awe of an actor’s skill to keep going for hundreds of pages, shifting in and out of character. Never running out of breath, never running dry.’

Still, some authors opt to narrate their own stories. George Sirois has seen two of his novels made into audiobooks, and he’s been the narrator. How does that feel?

‘It doesn’t quite have that “my words have come to life” euphoria, at least not for me,’ he says. ‘My imposter syndrome has a way of getting in the way. I’m just asking myself why I thought this was a good idea to write the book in the first place.

‘I direct myself when I record. Then I go back through the audio files to make sure I didn’t stumble or miss marking a spot where I made a mistake. A major challenge is overcoming your urge to re-record just because you don’t like your own voice. You also have to make sure you’re using the right voice with the right character.’

So: a lot to overcome. But there’s pleasure and satisfaction in performing your own words too: ‘If the author has a theatre background and can perform their book rather than just read it, go for it,’ says Sirois.

Ruth Thomas recently had the experience of hearing her book narrated in two different versions almost simultaneously. Her third novel, The Snow and the Works on the Northern Line was published in January 2021. At the same time it was narrated by Ell Potter on BBC Radio over 10 episodes. Plus an audiobook version came out from WF Howes, narrated by Deirdra Whelan. It made ‘Audiobook of the Week’ in the London Times.

So did one version win out over the other? ‘I’ve been very lucky to have had two brilliant actors bringing out very different qualities,’ says Thomas. ‘Each narration brought out slightly different colours in the book – one more wistful, the other more comic.

Perhaps it’s important for writers to let go of the idea that they own some authorised way of how a story should be told. This is certainly the case in film production, after all, where the writer is a bit player in the overall scheme. Having the writer on set is a bit like taking your mother-in-law on honeymoon, as David Mamet once said.

‘I’ve had quite a few individual stories broadcast on the BBC, and those have generally worked,’ says Thomas. ‘There have been one or two where the actor’s narration hasn’t quite matched what I was imagining or aiming. That was more difficult to listen to because it felt as if some bits of the story had fallen overboard. But those occasions have been rare. In any case I think it’s important, as a writer, to have an open mind about the way your work’s interpreted. It shakes you out of your comfort zone and makes you think about all the ways that exist of telling a story.

‘I often write in the first person, and most of my protagonists start out as versions of me. Then, somewhere in writing the novel, they become their own person. Hearing them “speak” feels like one further step into them becoming a fictional character and also, paradoxically, more real. I can imagine them as separate beings who might go off and lead entirely different lives from the ones I’d created for them.

‘People sometimes liken being published to handing your children over at the nursery gate. Hearing your book narrated feels like waving them off at the train station.’

Having your story narrated should be seen as a wonderful opportunity, not a threat to your authorship.

An audio version can bring your story to a different audience, and uncover rich new layers and dimensions in the story.

What’s your favourite audiobook, and why?