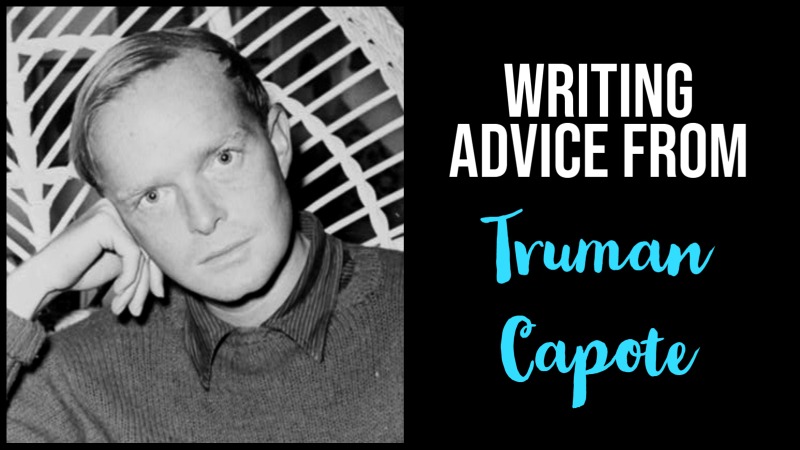 In this post, we share seven bits of writing advice from Truman Capote, the famous American crime writer.

Who Was Truman Capote?

Truman Garcia Capote (born 30 September 1924, died 25 August 1984) achieved acclaim for his true crime writing, and for his poetry and prose.

In Cold Blood was his last full-length novel. Capote continued writing short stories, and would live off his celebrity status until his death in the 1980s.

Capote was iconic, but it is far better to study his writing than mimic his lifestyle. Here are seven bits of writing advice from the great Truman Capote.

‘I was writing really sort of serious when I was about 11. I say seriously in the sense that like other kids go home and practice the violin or the piano or whatever, I used to go home from school every day, and I would write for about three hours. I was obsessed by it.’ – American Writers (American Biographies)

Serious writers should work to stay in practice. If you chose baseball or poker as your skill-of-choice, then regular practice would be the first rule. Imagine the same is true for writing.

Not every writer begins as young as Capote, but there is good advice to be found in what he said. Begin and end your days with languages and writing.

You want to be a writer, don’t you?

‘There is really no practical help that one can offer: it is a matter of self-discovery, of one’s own conviction, or working with one’s own work; your style is what seems natural to you. It is a long process of discovery, one that never ends. I am working at it, and will be as long as I live.’ – Too Brief a Treat: The Letters of Truman Capote

Style can be difficult for a writer. But the quote above should remind you that style is an ever-developing thing.

Develop your style (and always without copying others). It is going to take 10, 000 hours. It might even take more than 10, 000 pages. Absorb writing influences like a sponge, and broaden your horizons by reading more.

Capote, though great, admitted that his own writing style was still in development by the point he said this.

‘Never demean yourself by talking back to a critic, never. Write those letters to the editor in your head, but don’t put them on paper.’ – Truman Capote: Conversations

Truman Capote received harsh criticism throughout his writing career. All writers will, and all writers do. The important part is how it affects you (and sometimes, whether you read it at all).

Capote kept things professional at all times. He would never lash out at a critic, though they bit and gnashed at him.

If you must vent, write it down (and keep it private).

‘I also write the last paragraph of a page or story first. That way I always know what I’m working towards.’ – New Again: Truman Capote (Interview Magazine)

It is always a good idea for writers to know where they are going with an idea. Capote solved this writing problem for himself by beginning with his endings.

Write the last parts first, or write according to a very thorough outline.

Without foresight, the writer is aimlessly stringing together sentences (and might never have a plot). Take some advice from Capote, and know where your story is going before writing it.

Capote had meant this famous quote for another writer whom he did not care much for. But the quote can also be applied to mean the craft of writing in general.

Always use creativity, purpose, and employ your chosen language well. Without the creative spark, you’re not a writer, but a typist.

‘When seriously explored, the short story seems to me the most difficult and disciplining form of prose writing extant. Whatever control and technique I may have I owe entirely to my training in this medium.’ – Truman Capote’s Previously Unknown Boyhood Tales by Philip Oltermann

Short stories are a specific writing art. The short story can train any writer (of fiction and non-fiction) in character creation, plotting, and other important skills.

Capote would return to short story writing in his later years. Get to know the short story, no matter what you would like to write.

7. Know The Rules (Before Breaking Them)

‘Writing has laws of perspective, of light and shade just as painting does, or music. If you are born knowing them, fine. If not, learn them. Then rearrange the rules to suit yourself.’ – 1974 Interview in Paris Review (Summer Ed)

It’s a common saying that one must know the rules before any attempts to break them. This is Capote’s version of the same truth.

Rules are there to be learned. Once you know the rules, you can experiment with different styles and techniques (but first, always learn!). Capote would make his career from rearranging the rules of writing to create his own, unique style of storytelling.

I hope you enjoyed these bits of writing advice from Truman Capote.