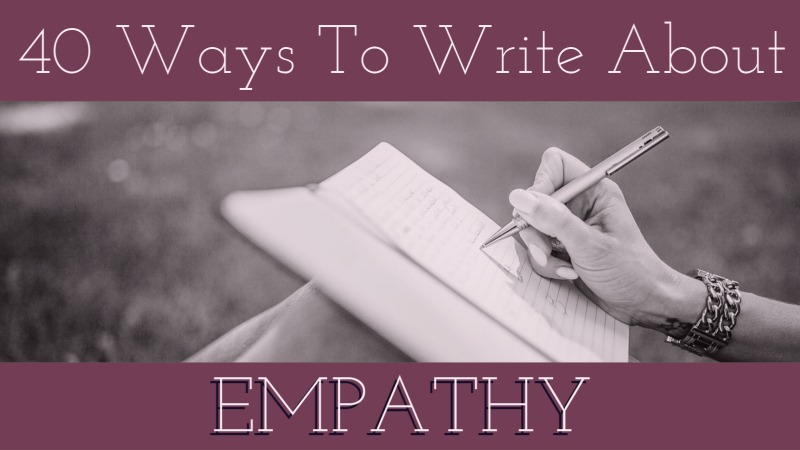 40 Ways To Write About Empathy

Great characters either lack empathy or have loads of it. In this post, we have included things for you to consider when you write about empathy.

One of our most popular posts on Writers Write is 37 Ways To Write About Anger. We thought we would look at interesting ways to write about other emotions, including love and fear and happiness and grief.

In this post, we discuss ways to write about empathy.

40 Ways To Write About Empathy

A. What Is Empathy?

According to Psychology Today: ‘Empathy is the ability to recognise, understand, and share the thoughts and feelings of another person, animal, or fictional character. Developing empathy is crucial for establishing relationships and behaving compassionately. It involves experiencing another person’s point of view, rather than just one’s own, and enables prosocial or helping behaviours that come from within, rather than being forced.’

Empathy is stronger than sympathy. As Merriam-Webster explains: ‘Empathy is similar to sympathy, but empathy usually suggests stronger, more instinctive feeling. So a person who feels sympathy, or pity, for victims of a war in Asia may feel empathy for a close friend going through the much smaller disaster of a divorce.’

Empathy is the ability to imagine yourself in another person’s shoes.

B. Three Types Of Empathy

According to psychologists Daniel Goleman and Paul Ekman, there are three types of empathy:

You can decide how empathetic your character really is when you write about them.

How To Tell If Someone Has Empathy:

C. How To Tell If Someone Lacks Empathy

If people lack empathy they can be classified with narcissistic or anti-social personality disorders. There is often not a lot you can do to help people like this. It is important to remember that their behaviour is not your fault, and that they will not change. There is nothing you can do to make them feel something they are incapable of feeling.

If you want to write about a character who lacks empathy and has one of these disorders it is important to do a lot of research into it. Interview specialists, read extensively, and create a believable character.

D. Which Characters Should Be Empaths?

Empathetic characters are often the moral voice of a story. Remember this when you write about empathy.

A true empath listens carefully without jumping to judgement. They do not interrupt. They do not share the fact they have had a similar experience. They do not immediately propose a solution. Empaths try to understand how another character feels and why they feel that way. A psychologist is the ideal empathetic character.

However, we don’t all have somebody like this in our stories. In general, these characters should show empathy:

You can choose whether or not these characters are empathetic:

When you’re writing an empathetic character, include these body language signs:

If you want your character to empathise with somebody else, they should mirror the body language of the other person. They should also speak in the same tone (as long as the tone is reasonable).

Suggested reading: Why Method Writing Makes You A Better Author

F)  The Importance Of Empathy In Plotting

As a writer, you can use empathy to complicate the plot:

I hope this post has given you some ideas on how to write about empathy.