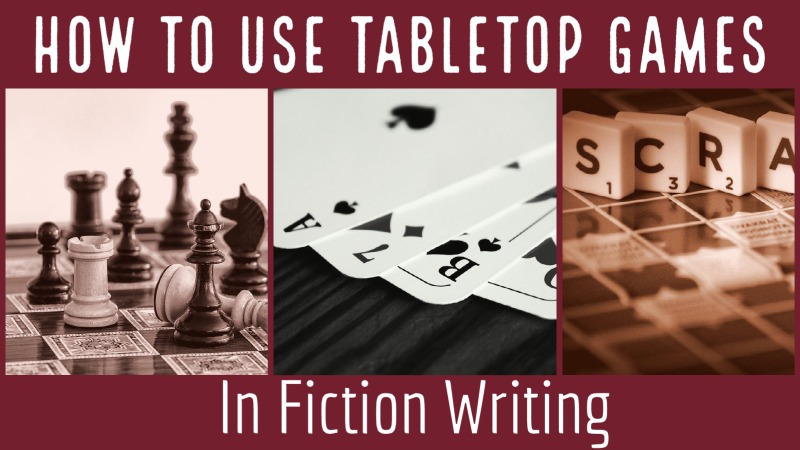 How To Use Tabletop Games In Fiction Writing

Are you looking to add an interesting plot device to your story? In this post, we look at how to use tabletop games in fiction writing.

Tabletop games are: ‘games that are normally played on a table or other flat surface, such as board games, card games, dice games, miniature wargames, or tile-based games.’

Chess features in J.K. Rowling‘s Harry Potter & The Philosopher’s Stone, and contract bridge is seen in Agatha Christie‘s Cards On The Table. Checkers appears in Neil Gaiman‘s American Gods, and James Bond is known to play poker, bridge, and others.

Would you like to know how to use card and board games within your fiction?

Here’s an introduction to tabletop game writing covering plots, rules, and getting to know the language of games.

How To Use Tabletop Games In Fiction Writing

Fictional writing with board elements can cross into any genre. Romance, thriller, murder mystery, or horror is up to the writer to choose.

Successful board game fiction must:

Powerful examples include Tickets To The Devil by Richard Powell, The Cardturner by Louis Sachar, Moonraker by Ian Fleming, and The Queen’s Gambit by Walter Tevis.

Others include The Girl Who Played Go by Shan Sha, and scenes featuring more chess in films like 2001: A Space Odyssey, and Blade Runner.

Games can also be created for the story, like Yu-Gi-Oh!’s Duel Monsters. With worldwide tournaments and players, it’s a trading-card game played for real since its 1996 invention.

Next, let’s talk about how writers can include accurate games within their own stories.

1. Decide Where The Game Fits In

An important decision is where the game fits into your fiction.

The game could be integral to a single scene (such as Wizard’s Chess), but also make up an entire story’s plot (such as in The Queen’s Gambit).

Outline the plot with the game in mind.

While many writers aren’t Grandmasters or board game champions, an effective outline contains the results of the game for the plot‘s progression.

It’s not necessary to be an expert to know this about your own story. Just a thorough writer.

Learn the basic rules of the game before writing about it.

Official rulebooks are available from regulatory bodies that exist for each game, like the WBF (World Bridge Federation) and ACBL (American Contract Bridge League) for competitive bridge.

Refer to rules whenever there are specific questions about what players can (or cannot) do during competitive matches.

YouTube is also an excellent resource for quick introductory videos for different games.

Immersion allows writers to experience the different nuances and thrill of the game first-hand.

Playing against more experienced players through a live platform is recommended. AI-driven play is also available for most games from Monopoly to poker.

Even if you lose at first, the idea is getting to know the game better.

Pay attention to moves, but also watch how players communicate during the game. Writing dialogue, you will need to know how players talk.

Almost every card or board game has developed specific culture and linguistics attached to it.

Viewing, integrating, and playing are the most important things a writer can do for getting to know this better.

Gaming culture and language hides in:

Writers in research-mode can also interview players for a comprehensive view of the game’s world.

If you plan on showing the game within your story, pay attention to how writers within each game (usually in nonfiction texts) have written down theirs.

Many board and card games have official game notation. For each game, it’s standard so that players everywhere can read and understand the same text.

Chess notation and bridge notation are different things, and a hundred thousand more games can be named. It’s plain language for gaming.

Sometimes, software has been developed to note (and export) games in a visual format. Do your research to know if this is true for your game.

Writing an excellent match as a non-expert seems impossibly difficult, but isn’t. The trick is to start with the results of the game, and then consult with an expert player or teacher about its specifics.

Write down the game as you see it. Then, run the game by someone with authoritative experience. If something is amiss, they can tell you.

Solvers and analysers are the gaming writer’s other Big Help.

A solver or analyser can look at specific moves (or card hands), and determine things like:

Experts and editors everywhere use solvers and analysers to check their puzzles. If you’re writing gaming fiction, so should you.

Even if you’ve been playing the game your entire life, writing about it will still require an expert opinion. Try to set up interviews.

Experts are experienced players, champions, or teachers. Sometimes, professors of probability or gaming theory are who you’ll call.

Effective gaming writing must pass the scrutiny of any serious players, while being enjoyed by any casual ones. That’s how The Queen’s Gambit or Cards On The Table enthralled such a large audience.

Examples Of Tabletop Games That You Could Use

Board gaming is a rich resource for any writer who appreciates the element of puzzles or competition. Right now, it’s also a genre gaining speed: many board games are recognised as competitive esports.

Games like bridge have also been shown to benefit the memory and mind. It’s something all writers could do with.

Are your characters ready to play?

Get involved in tabletop games in fiction writing and let your creativity ride.