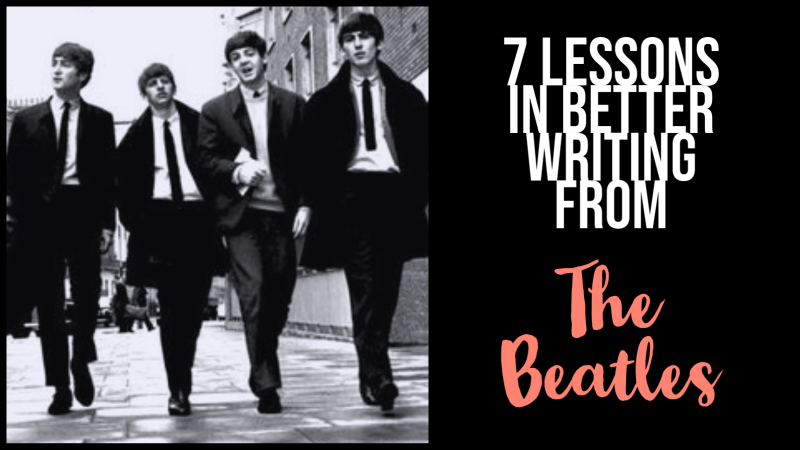 Looking for some writing advice and inspiration? In this post, we include seven lessons in better writing from The Beatles.

When measured by album sales and song downloads, The Beatles were one of the biggest bands in existence. Yesterday is the world’s most covered song, and other tracks written by the Fab Four are familiar to most people who will read this.

While their official end came in 1970, their influences continues well into today.

Don’t forget that The Beatles were writers, too. While people see them as musicians, what they sold was their writing.

Writers can learn a lot to improve their writing through The Beatles. If you want to know more about writing that captivates those who hear and read it, they knew some writing tricks.

Go to YouTube, and look up some lyrics before reading further. Start with Strawberry Fields Forever, Help, or I Want To Hold Your Hand. Some were rock, some were blues, and others were radio-friendly – a couple were very unusual.

Here’s what writers can learn from the writing of one of the greatest groups to exist.

Briefly, About The Beatles

Albums including Yellow Submarine, Abbey Road, and A Hard Day’s Night are credited to the band. Popular, individual songs are too many to list here.

The Beatles still have an incredible influence on art, popular culture, and creativity. Their work is popular, everlasting, and original. Their work is inspiring, written about often, and discovered by new fans every day.

Do you want people to see your writing like this someday?

Learn from the Beatles just as much as from traditional writing role models like Stephen King.

They knew how to write.

7 Lessons In Better Writing From The Beatles

There are many writers who look to primarily fiction or non-fiction authors for inspiration. Include scriptwriters and lyricists in your list, even if you do not write in the same media which they do.

Here’s where to start exploring the Beatles:

1. How To Use Your Words

The Beatles were responsible for the lyric ‘I am the walrus’.

People are still debating what it could have meant. But it’s still catchy enough to have sold millions of copies – and inspired thousands of other artists.

As a writer, your greatest tool is using (and often bending) the capacity of language. Words influence a lot of things, including mood, and a writer’s tone.

Does it mean that you have to use flowery, embellished language every time you write? No, not necessarily. But writers should always use language with just a dash of creativity that sets them apart from other writers in the world.

Know language, and aim to get to know it better as a writer every day.

It worked for the Beatles, and it can work for you.

2. Writing Great Titles Is As Important As The Hook

A title is responsible for what makes a reader continue, get hooked, or read something else.

The Beatles knew the power of writing great titles.

On paper, the titles are powerful on their own.

As a writer, that is what you should aim to achieve.

Writing elements like the hook, the first paragraph, and the last sentence are just as important as writing a great title.

3. Remember To See The Business Side Of Writing

John Lennon reportedly once told another band member that it was time to ‘write a swimming pool.’

While that was pretty blunt, it describes what writers should know about the business side of their writing.

See pitches and sold work as business capital as a writer. After all, your words are worth money. Every word counts, especially when the writer intends to sell any of them.

The Beatles had a knack for great stories within their songs.

Read the lyrics of songs like The Ballad Of Rocky Raccoon, or Strawberry Fields Forever. Eleanor Rigby and even Can’t Buy Me Love are good examples of their storytelling capacity.

There are beginnings, middles, and ends. Distinct ones, and each song tells a story to the listener or reader.

As a writer, you should aim to make your writing always achieve this.

Excellent fiction and non-fiction writing means you should always work on better beginnings, middles, and endings..

5, Ideas Can Come From Anywhere (At Any Time)

The original idea for Yesterday came from a catchy melody and Paul McCartney singing the words ‘scrambled eggs’ to it. Creativity is a strange thing. It can strike at any time, and a writer has to be ready to seize the moment (or set out a time for pitching and writing every day) to keep ideas flowing.

The song Yesterday is credited as the most covered and recorded song in history. That’s really something, and it started with a very basic core idea.

Keep all your ideas. Don’t discount the weird ones. They might just be the ideas that work well with readers – and remember that the best ideas can, indeed, come from some very weird places.

6. Learn To Write In Any Kind Of Chaos

Writers like order, but too many writers blame their circumstances for an inability to get writing. There’s never an ideal environment to work, and it is something that might be impossible to find.

Don’t let circumstances stand in the way of completing your writing.

7. Rights Are What You’re Really Selling

Rights to Beatles lyrics are worth more their literal weight in gold. Especially songs credited to the partnership of John Lennon and Paul McCartney have been bought, sold, re-sold, and traded to the tune of billions in total.

If you’re a writer, record it when you sell and publish your work. Learn what type of rights you are giving up, and whether the work can be re-posted (or republished as a reprint again).

While writers write, writers should also have a handle on the business of selling and administrating their rights.

For any writer, how they handle their rights is as important as how good their ideas look on paper.

Almost everyone knows the Beatles. If you don’t, now is an excellent time to have a listen to their library of work.

The movie Across The Universe is also an excellent start for new fans (and even though it doesn’t feature the Beatles themselves, it features plenty of their best work).

As a writer, every influence can help to grow your abilities as a writer.

Who are your strongest writing influences right now, and what have you learned from their work?

Image: This image is from the “Album Covers Wiki” on The Beatles and is licensed under the Creative Commons Attribution-Share Alike License.