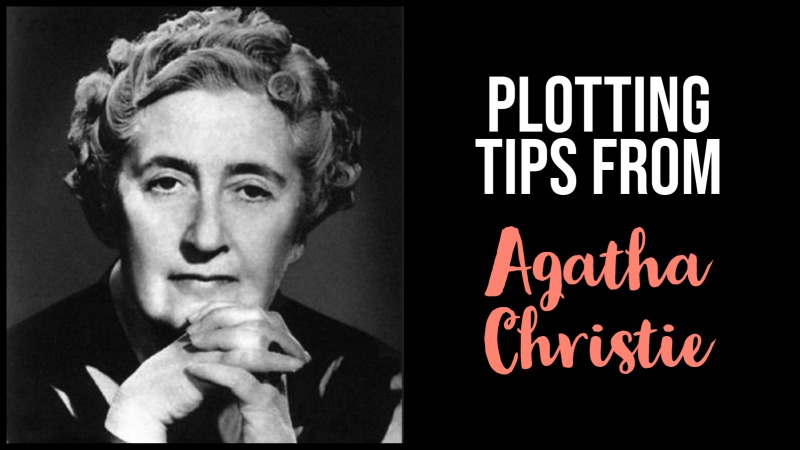 In this post, we share seven plotting tips from Agatha Christie, one of the world’s most prolific and profitable mystery novelists.

Agatha Christie is still one of the world’s bestselling fiction writers. Dame Christie is credited with the creation of the modern mystery fiction genre – especially cosy mysteries.

Miss Marple and Hercule Poirot are two fictional characters that have stood the test of time. They have come to inspire the creation of countless fictional sleuths.

If you would like to improve your elements of plotting, Christie is a good author to study.

Who Was Agatha Christie?

Christie wrote 66 detective-style novels. Her work has sold more copies than both Shakespeare and the traditional King James Bible.

Cards On The Table and Murder On The Orient Express are just two great novels to recommend for writers who would like to know Agatha Christie better.

Here’s what writers can learn from one of the most readable and accessible authors of our time.

MUST-READ: Analysing Agatha Christie – The Best-Selling Novelist Of All Time

‘There is always, of course, that terrible three weeks, or a month which you have to get through when you are trying to get started on a book. There is no agony like it.’ – Agatha Christie: An Autobiography

Beginning a story is one of the most difficult parts of writing.

Writers like Stephen King and James Patterson agree. Beginning the story is sometimes more difficult than getting to the end.

What separates an ambitious writer from everyone else?

Ambitious writers write, while everyone else gets stuck thinking about writing instead.

If you want to be a writer, start by plotting your story first.

MUST-READ: What Is A Plot? – A Writer’s Resource

‘Walking or just washing up, a tedious process. […] Years ago I got my plots in the tub, the old-fashioned, rim kind – just sitting there, thinking, undisturbed, and lining the rim with apple cores.’ – NY Times Interview, Quiet Murders Suit Miss Christie (1966)

Every writer has their concept of where ideas come from. Each writer also has their own method of getting there.

Agatha Christie found her ideas by letting her mind run wild while she was busy doing other things. It’s a technique that thousands of writers have used before her.

If you think that you might have an excellent idea for a plot, let your mind stew around the plot for a while. Give it a chance to develop, and take notes.

Plots develop in the writer’s imagination, and it’s never advised to ‘force’ the idea process. You can be creative about it though.

3. Use Your Interests (For Colourful Plotting)

Agatha Christie had a wide scope of interests. These included other writers’ fiction, archaeology, and card playing. The best writer is diverse in what they study.

Pop culture references can enrich writing. Use the pastimes, hobbies, and cultural references you enjoy when plotting. If it’s a topic you know well, it can help your plot.

When reading, do you enjoy exploring topics that you’ve never learned about before?

Remember that your readers will feel the same.

Agatha Christie included references to contract bridge in her work often. She included them in Cards On The Table as a central plot element.

Characters require a great deal of depth and background. People like to read about characters they can relate to.

Agatha Christie created one of the greatest fictional detectives of all time. This did not mean she liked Hercule Poirot on a personal level.

Instead, he made a great character on paper, and this included his undesirable traits, too.

Writers should develop background, flaws, sharp edges, and history for their characters. The reader might never even see these.

‘Everyone is a potential murderer. In everyone there arises from time to time the wish to kill, though not the will to kill.’ – Agatha Christie, Curtain

Writers use their skills to create monsters, stress, and suspense in the fictional realm. Writing can be a pretty dark endeavour.

Agatha Christie never denied the potential darkness of being a mystery fiction writer. Instead, she embraced it by using the psychology of human potential throughout her work.

For plotting, an understanding of human psychology is essential.

All your characters have potential. They can do anything within the context of your story. What are you going to make them do? Answer this question, and you start to develop plots and sub-plots.

Motivation and potential are powerful attributes for your characters. Developing this is part of creating a decent plot.

6. Cause & Effect Drives Your Plot

‘To get at the cause for a thing, we have to study the effect.’ – The Mysterious Mr Quin

Two of the most important questions for a fiction writer are ‘What if?’ and ‘What happens next?‘

The question ‘What if?’ is an essential one for cause. ‘What happens next?’ is important for effect.

For plotting to work, one thing has to lead into the next. That’s cause and effect at work. If this happens, what will happen next?

Outlines are recommended, especially for writers who would like to write mystery or horror stories with intricate plots.

7. Collaborative Plots Aren’t For Everyone

‘I’ve always believed in writing without a collaborator, because where two people are writing the same book, each believes he gets all the worries and only half the royalties.’ – QI Interview, Best Quotes of ’54, ’55, ’56

Writers can expect to spend hours alone while plotting, writing, and editing.

Some writers prefer to share the task – like James Patterson. Decide where you fit as a writer, and realise that with collaboration comes responsibility.

Are you more like Patterson, or do you prefer to plot alone?

We hope this article with its seven plotting tips from Agatha Christie has helped you to write better, clearer mystery fiction that will captivate your readers.