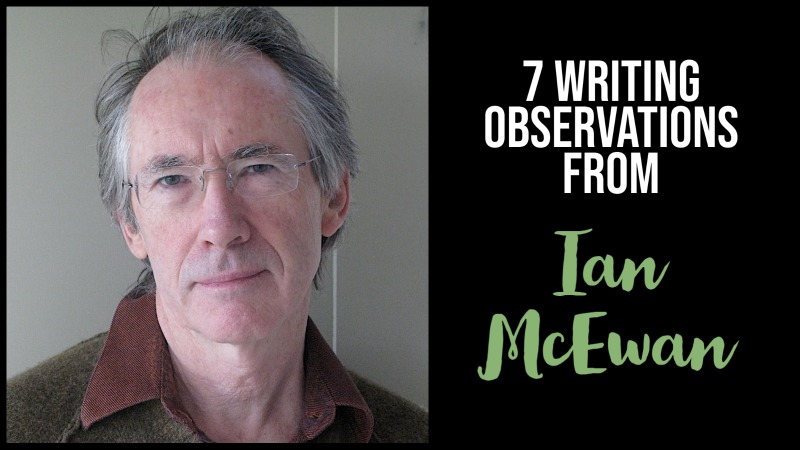 Ian McEwan (born 21 June 1948) is a British novelist, difficult to define by a single genre.

He published his debut novel, The Cement Garden in 1978. It earned him the name, Ian Macabre. He experimented with genre and wrote the story Rose Blanche in 1985 for children. Black Dogs was published in 1992 and delved into mystery fiction. Machines Like Me explored artificial intelligence.

His opinions have also proven controversial. He is an open and harsh critic of religious fanaticism, and frequently shares his thoughts on politics and popular culture.

His literary novels include Atonement, Nutshell, Saturday, and The Comfort of Strangers. He’s a good read – six Booker Prize nominations can’t be wrong. His work has also been adapted to film (Atonement).

Here’s what McEwan has to teach.

1. Procrastination Happens To Everyone

‘I’m quite good at not writing.’ ~New Yorker Interview (with Daniel Zalewski)

Even Ian McEwan admits he can put off the task of writing. He has still managed to write novels, novellas, plays, and more during his career.

Procrastination happens to everyone. But it should never get in the way of good writing. McEwan writes through it, and so can you.

‘Novelists have to be adept at controlling the flow of information, and, most crucially, they have to be in charge of the narrative.’ ~NPR

If you want to write an effective storyline, control your story’s narrative.

Authors have the unique power to do whatever they want to their characters or plot. That’s powerful. It is a task to be approached with responsibility.

Drive your story’s plot (but never into the ground). Readers only know what the writer tells them. If stories have unanswered questions at the end, that’s the writer’s fault.

3. Write To Lose Yourself In It

‘Perhaps the greatest reading pleasure has an element of self-annihilation. To be so engrossed that you barely know you exist.’ ~The NY Times

What’s your opinion when reading your own work? Can you really get lost in your story? Do you pause, think, or halt at parts?

McEwan knows how to make the reader lose track of time. If you cannot evoke this feeling with your own work yet, it needs editing or reworking.

4. All Stories Require Sleuthing (From The Writer)

‘You could say that all novels are spy novels, and all novelists are spy masters.’ ~The Daily Beast

When McEwan says all novels are spy novels, he means that stories require detective work.

Writing fiction requires effort from the writer. The writer should dig, and uncover, and excavate. It’s what gives the story a plot.

If you peek at most writing outlines, they’re not unlike court statements (or police procedural documents). Outlines should be thorough, with as much detail as possible.

Are you just writing? Or are you digging for an excellent storyline?

5. Learn From Your Critics

‘Reading reviews makes you thin-skinned. It’s like waves washing layers off your skin.’ ~The Financial Times

Reviews and rejections can be harsh.

All writers deal with rejection letters and critics, including McEwan.

McEwan avoids reading his reviews. Learn from feedback, but never let it sting. Other writers, including Stephen King, have given similar advice to new authors.

Professionals don’t get stuck on their rejections. Instead, they edit, re-submit, or pitch again.

‘I’ve become immune to the Booker. I think we need something a little more like the Pulitzer prize, where there isn’t this great race.’ ~GulfNews

Even though McEwan has been nominated for the Booker Prize six times, he doesn’t keep prizes in mind when writing. The ‘great race’ he refers to can get in the way of writing something good.

Chase the storyline, not the acclaim. That’s how you write an excellent story.

‘How often one reads a contemporary full-length novel and thinks quietly, mutinously, that it would have worked out better at half or a third the length.’ ~New Yorker

Focus on the important parts. Don’t use pages to describe the type of table. When editing, always ask what can be said with fewer words. Brevity is a skill good writers cultivate.

We hope these writing observations from Ian McEwan help you with your writing, but the journey doesn’t have to end here. McEwan wrote much more than what’s listed here. Visit Ian McEwan‘s website for his latest work.