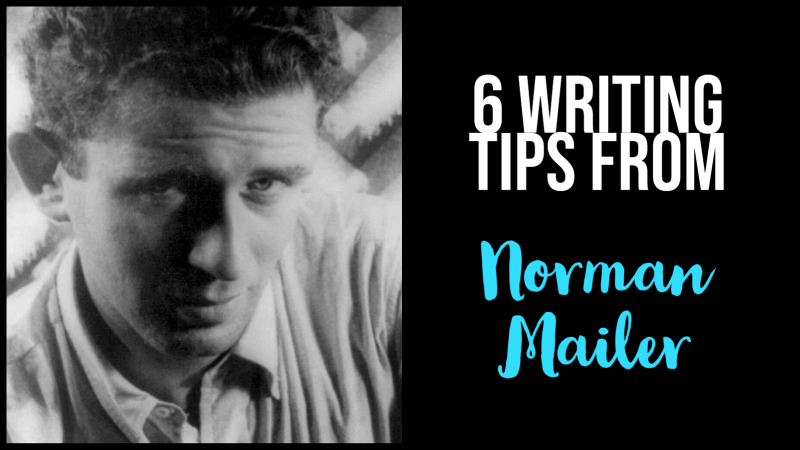 Writers Write shares writing resources and writing tips. In this post, we share these writing tips from Norman Mailer.

When writers are looking for the best writing advice, they seek out the sage advice and random musings of other writers, editors, and publishers.

His works also includes plays, articles, poems, and essays like ‘The White Negro: Superficial Reflections On The Hipster’ (published in 1957).

He continued writing until his death in 2007.

Norman Mailer was one of the defining writers of New Journalism.

The genre is characterised by blending storytelling with fact. A technique and form of journalism that has been used by writers including Hunter S. Thompson, Tom Wolfe, and even South African writers like Jacques Pauw, Nataniel, and Koos Kombuis.

New Journalism tells fact, but through introducing subjects (and often the journalist) into the story. Accuracy is still key to New Journalism, though mixed with more visual scenes and descriptive language.

Writer, journalist, playwright, and poet Norman Mailer has been called a lot of things, including outspoken and rude. (But isn’t that sometimes the point of thought-provoking journalism?)

Sure, he was a lot of things, but he was also a winner of the Pulitzer Prize. He had many things to say about writers and writing. Most of these things count as useful, inspirational, or as a harsh wake-up call about the realities of what it means to write.

Here are six writing tips from Norman Mailer, and what writers can learn from what he had to say.

1. Writers Should Use (And Learn From) Their Life Experiences.

‘The writer can grow as a person, or he can shrink. His curiosity, his reaction to life must not diminish.’

What’s the point of a writer who cannot evocatively describe a scene, a setting, an emotion, or a character?

Language is the power given to the world’s writers. Use it!

‘Violence is the last frontier in literature.’

Writing is never boring or bland. Art isn’t meant to be vanilla (that is, without flavour!), or uninspiring. That’s writing that readers will hate, and editors will likely reject.

When Mailer spoke of violence and literature, he was referring to what writing is supposed to achieve.

Violence means writing that is explosive on the page. Explosive as an idea, and explosive to the consciousness of the reader.

It’s his version of saying ‘feed your head’, or ‘show, don’t tell‘.

Basically, make sure your writing doesn’t fizzle out like wet gunpowder.

3. Writers Can Get Stuck In A Routine, Style, Or Genre (But Shouldn’t).

Writers should be varied. Read and write over a wide scope if you want to get a handle on how to be a better creative. Read fiction in every form, dip into journalism, pick up your local newspaper, and pick apart advertising copy by the word.

If you were to write or read the exact same thing every day for months or years at a time, you’ll get bored. Your writing will stagnate. You’ll probably and eventually find your writing getting stuck.

See, repetition can be bad. Make sure your writing stays fresh.

‘Writing can wreck your body. You sit there on the chair hour after hour, and sweat your guts out to get a few words.’

Romanticise the art of writing all you like, but writing is a lot of hard work. If you want to be a successful writer, prepare for tight deadlines, long nights, blurred vision, back pain, and the potential of developing or worsening conditions like arthritis.

Many emerging writers imagine writing to be something it’s not. There’s no movie montage moments for writing a 20, 000 word manuscript. You sit down, you write, and you do it – and yes, it might physically hurt.

That’s being a writer.

Are you okay with that? Can you handle weeks or years of it?

If the answer is yes, congratulations. You’re passionate about writing. Maybe passionate enough to write something meaningful.

‘Mysteries are irritated by facts.’

When Mailer said this, it might be easy to misinterpret in the context of journalism – a direction where facts matter.

But mystery is essential to many writing pieces, even ones that contain only hard facts. Mystery is your first paragraph, or your hook sentence. Mystery is what makes the reader keep reading – and even if your writing is all fact, without this mystery, the reader stops reading.

Mystery hooks the reader. Readers have to wonder what comes next, even in fact-pieces.

Always pay attention to your hooks, your first paragraphs and your starting sentences.

6. Don’t Open The Pressure Cooker (Of Your Current Writing Ideas).

‘I think it’s bad to talk about one’s present work, for it spoils something at the root of the creative act. It discharges the tension.’

A lot of writers, including Stephen King, share this opinion. Do you?

When writers discuss a work-in-progress to their friends and family, it’s like opening up a pressure cooker. All the good stuff escapes right out the top and might dissipate.

Once you start talking about the plot twists, you might keep talking and make drastic plot changes based on what readers have said.

Sometimes discussing your article or story before it’s done can mean that someone else’s opinion is having an unwelcome influence on your work before it’s completed.

Want to show off your plot?

Get draft one on paper first.

We hope you enjoyed this post with its writing tips from Norman Mailer.