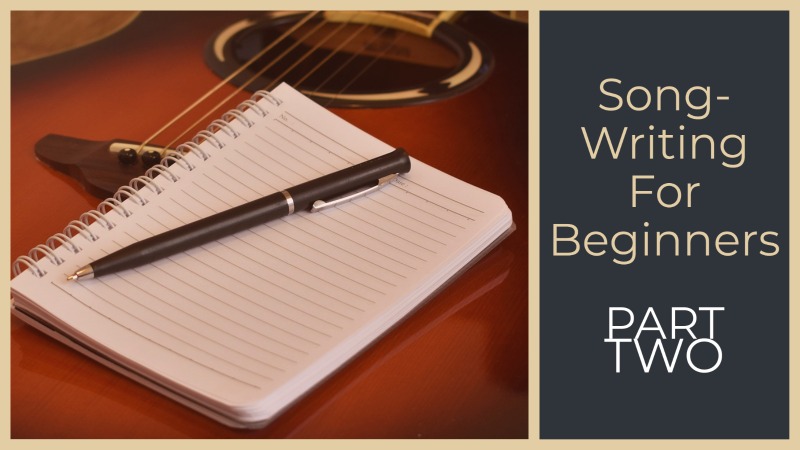 This post is part of a Writers Write series on songwriting. In the second post on songwriting for beginners we cover lyric writing techniques.

Writing is a diverse art. While there are authors who stick to features and fiction, many choose songwriting as their form. If your ideas flow with rhythm or rhyme, you might have a natural knack for songwriting and poetry to use.

The average songwriter will write plenty of questionable songs before a hit appears. Some are lucky, though most are not. Expect hard work and competition in songwriting.

Is that exciting rather than terrifying? Songwriting might be for you.

Last week, I dealt with theory. In this post, there’s more about practical lyric writing techniques.

Almost all songs share two elements: the title and the topic.

Songs have to be named something, and should be about something. It’s a fair starting point for sitting down and writing a song.

Exercise 1: Name a suggested title and topic for a song. Simultaneously, decide on a possible genre for your songwriting project.

Understand the different parts of a song to write one. Research different songs to develop a natural feeling for how songs fit.

From Part 1: ‘Basic songwriting parts include:

Songs can also include a pre-chorus or instrumental solo. The bridge doesn’t appear in all songs, but forms a ‘transition’ between sections.

Verse-Chorus-Verse is one of the most common songwriting structures. The chorus can also be first, like Ain’t No Sunshine or All About That Bass.

A writer is well-equipped if they begin with the combination of an idea and title for their song.

After this, songs grow into fuller concepts. Start with a single line or two, then build. It’s common for writers to have something simple appear as an idea.

What are you going to do with your concept? Will these catchy lines fit as verse or chorus?

A chorus repeats, but a verse tells the rest of the story.

It draws the reader or listener in, just like good fiction. Writers should notice it also fits with the title and theme of the song.

Exercise 2: Write down two to four catchy lines for your songwriting concept. Remember that these should fit the topic or theme. If they don’t, experiment with theme.

Songs-in-progress can look messy on paper, at least for some writers. While being written, songs are fragments and scraps the writer imagines might fit.

At this point, you might have sentence selections. Expand them, and try different drafts.

A writer could say, ‘I left home this morning’, but might also say, ‘I left for town at seven’. Writing a song means experimentation. It also means building on those very first lines you have.

With a couple lines, you can choose to make it a verse, chorus, or bridge in the song. The natural progression from there is writing the rest.

Exercise 3: Use your suggested lines from Exercise 2. Continue building on these sentences with creativity. After this, mark these sections as verses, introductions, or choruses.

Rhyme is a useful tool for songwriters and poets alike. While not all songs rely on rhyme, thousands out there will.

Appropriate rhymes are easier to find through rhyming dictionaries and synonym finders. Successful songwriters (especially in hip-hop and rap genres) practice how to rhyme spontaneously and with speed: learn from it.

It’s up to the writer, and depends on the song.

Exercise 4: Apply what you know to your continuing song project. Find words and sentences that rhyme to build your verses, choruses, and other song sections. Each step forward is closer to a full song.

Songwriting is an art that requires at least a bit of knowledge about chords, keys, and musical progressions. A degree in musical theory isn’t necessary, but it’s useful to know what you can.

Chord progressions fit into musical keys. These are the notes and chords that sound good together. Pay attention when you listen to music, and you will naturally notice these chord and note-changes in music.

If you are only getting to know chords and progressions now, virtual instrument software can help. The most basic types show you what these chords and notes sound like, while more advanced software allows PC-aided sheet music writing.

Exercise 5: As a writing assignment, research chords and their progressions through various songs.

Websites like Ultimate-Guitar can help writers to identify the basic chords for a song they know. Use what you have learned about beats, progressions, and chords to see if you can complete your song project!

Songwriting is interesting, potentially profitable, and excellent writing exercise for writers. But ask any writer-for-profit: the first thing they will emphasise is hard work before hits.

How do you get better at any type of writing? Research, write, and read.

This post is part of a Writers Write series on songwriting for beginners. Read Part 1 for more information on the theory of writing lyrics.