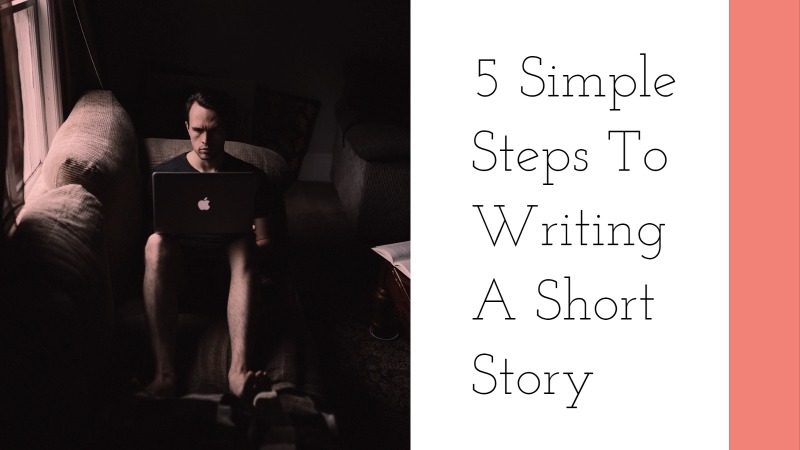 In this post, we illustrate a five-point method for writing a short story. For beginners, it’s a useful template. For more experienced writers, it serves as a checklist.

A Five-Point Formula For Beginners

It’s this insight that allow us, as readers, to relate to the story. To achieve this as a writer, you must create a character that someone will identify and empathise with.

The character must seem real. They must have flaws, habits and problems that most people can relate to. They must face conflict and they must experience a moment of change. The change must be marked by the end of their story.

Follow this simple five-point structure for writing a short story:

1. Create A Character With A Flaw Or Problem …

In a short story, you only have enough words to tell one character’s story – at a push, two characters’ story. To start the story, have someone in some sort of crisis. Find a flaw or problem for them to struggle with.

Let’s use a 2021 short story I wrote as an example. In Blind Boxes the main character is Mike. He is a Canadian-born male model of African-American and Chinese ancestry. He is handsome, confident, smart, and kind. On a trip home to Toronto for a shoot, he visits his widowed mother, Jean-Lan. The problem is that he can’t tell her that he is gay and living with another man in New York. He doesn’t know how she would deal with that sort of surprise.

For your story, remember: Often you can find a character’s flaws by looking at their bad habits (smoking, driving too fast, etc.) or find a problem in their daily routine (always late for the bus, forgetting their keys and wallet behind, etc.) The flaw doesn’t have to be earth shattering.

2. That Puts Them In A Situation Of Conflict …

The decision they’ve taken or the problem they face now puts the character into conflict with another character or characters.

Most of your story will be made up of how they deal with, or try to resolve, the conflict.

For example: Mike’s relationship with his lover, Brent, has been strained for a while. When Brent questions Mike about his visit to Jean-Lan in Toronto, it leads to an argument. Brent can’t understand why Mike can’t tell his mother about them.

For your story, remember: Conflict between two characters is the most common type of conflict in a short story However, it could be conflict with circumstances (poverty, war, etc.), inner conflict (guilt, shame, etc.), or conflict with the elements (caught in a snowstorm, a heatwave, etc.).

Read How To Fix Your Short Story In 10 Minutes

3. That Brings About A Key Moment Of Change …

Readers want stories that show how characters are shaped by conflict – for better or worse. The change must register with the reader.

You must write the change in a character in a way that is plausible, and emotionally satisfying.

For example: Brent tells Mike of how he came out to his single mother and older sister when he was sixteen. The truth brought them closer. Mike shares how the loss of his father is part of the reason he struggles to be honest to his mother. Mike realises that he loves Brent. He doesn’t want there to be any secrets or surprises anymore. He is released of guilt, shame, and hesitation.

For your story, remember: It is always better to express change in a subtle, but profound way. Give the reader ‘breadcrumbs’ or clues to what the change may or not be, so that the ending doesn’t confuse them.

Read How To Outline A Short Story For Beginners

4. By Tying All Three Elements Together …

For a story to have a unity, there must be a direct link between the main character, the conflict and the moment of change. In other words, the ending and the beginning must tie back to each other.

For example: In my story, Mike plans a summer trip to Toronto for Brent to meet Jean-Lan. He is certain of what we wants of the relationships with both his boyfriend and his mother.

For your story, remember: It’s always a good idea to start you start as near the end as possible. Similarly, end the story as soon possible after the moment of change.

5. And Shows A Single Facet Of Human Nature …

As writers, we put stories on the page to make sense of our own lives and the world around us. We want to discover or uncover the things that makes us – and others – tick.

Readers pick up a short story for the same reason. They want to have their ideas of themselves and others challenged or confirmed.

For example: In the last lines of the story, Mike remembers the time he introduced Brent to the gashapon machines in New York’s Chinatown. When he was young Mike’s mother used to call these toys ‘blind boxes’ – you never knew what you would get. As a theme, the gashapon works. It shows that some surprises are good. And even if they are disappointing, they are soon forgotten.

For your story, remember: You don’t always have to have a theme for every story – or it doesn’t have to be explicit. A story that is engaging and entertaining is more important than trying to make a dramatic statement.

Follow the ‘Rule Of Three’. Keep your story short, smart, and simple: one idea, one conflict, and one consequence for the character.

If you have illuminated one facet of life, you will have succeeded.

Buy How To Write A Short Story