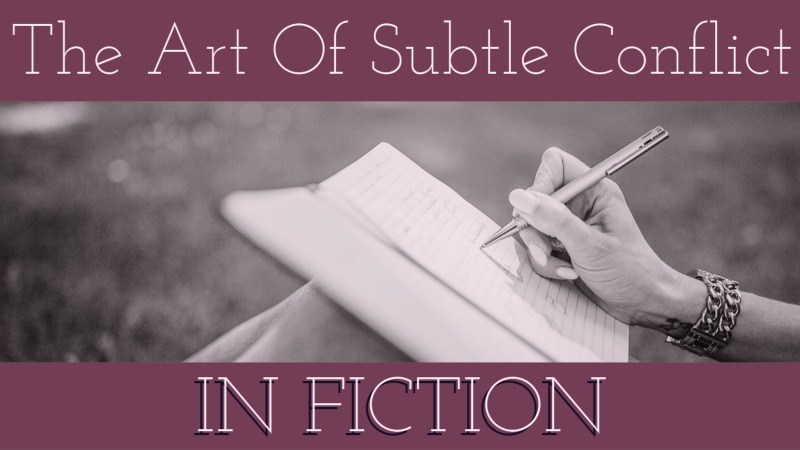 The Art Of Subtle Conflict In Fiction

We’re told to include lots of conflict in our stories, but how do we do it well? In this post, we look at the art of subtle conflict in fiction.

The Art Of Subtle Conflict In Fiction

Conflict is a huge part of fiction. It is what keeps the reader reading, but it is also a tricky word. When we first think of conflict in fiction, we think of car crashes, fist fights, and bombs going off. This is perfect if you are writing in a genre that requires that, but when we write for gentler genres, the conflict becomes less obvious and much less physical.

This is most often because there is not an evil antagonist. I have written often about the antagonist that does not have to be an ‘axe-wielding serial killer’ before, but that the antagonist is simply a character that is in opposition to the  protagonist’s story goal.

Remember that ALL stories have conflict on two levels. We have outer conflict. This would be the bombs and the fist fights. And we have inner conflict. This is usually the characters’ own self-doubt, desires they wish to suppress, stubbornness, or any character trait that can cause self-sabotage or make them doubt their ability to achieve their goal.

The inner conflict is usually resolved by achieving or attempting to achieve the story goal. For example, the stubborn character must learn to work with/listen to other characters to achieve the goal. The shy character with little self-esteem learns to stand up for themselves, when they free themselves from their oppressor.

TIP: we also forget that conflict does not always have to be negative. Positive events also cause change. Think of job offers, interesting things found, surprises uncovered or revealed.

I watched The Dig on Netflix and I was struck by the beautiful story that used subtle conflict to create a gentle, yet well-paced story.

This post contains spoilers. If you have not watched The Dig I recommend doing so before reading further. The synopsis is below.

The Guardian explains: ‘[The Dig] is based on the true story of the sensational Sutton Hoo excavation in Suffolk on the eve of the second world war; an Anglo-Saxon burial ship was found by the self-taught working-class archaeologist Basil Brown, whose historic discovery the academic establishment instantly tried to appropriate, without credit. He had been hired by the local landowner and widow Edith Pretty, who had long nursed an instinct that there was something in the “mounds” on her property.’

DISCLAIMER: I have not read the book, so I cannot say how the movie differs from the original work. Although the story is based on true events, Netflix has been criticised about the liberties it takes with history. Hello Magazine and Screenrant explore what was truth and what was fiction, but remember, in this post I want to discuss the art of subtle conflict in fiction, not historical accuracy. This will also make interesting reading for people who are writing stories based on true events.

Conflict usually comes from the antagonist, but also from the setting and other characters in the story.

A. Let’s look at the character roles and their relationship to the story goal:

Story goal: he is hired to excavate what could be burial mounds.

Story goal: the mounds are on her land and she wants to know what is in them. She hires Basil. Edith takes on the role of the friend character who has a shared goal, but an attraction between her and Basil, who is married, is also hinted at. Her role as the friend though is stronger than that of the love interest, but it is good to keep in mind that these role can change as your story and the character relationships progress.

3. Antagonist: The elitist academics from both The Ipswich Museum and The British Museum.

Story goal: At first they are not interested in the dig. They just want Basil back. As the dig becomes more important, they wish to take the credit and the treasure, and then they want to stop Basil from digging due to his lack of formal education.

B. Let’s look at the subplots:

Setting is a great way to add subtle conflict in fiction.

The Dig is set in England.

Weather: The weather is a challenge as it rains a lot and the dig is open, but also because they have limited time to complete the dig. The rain keeps delaying their work.

War: They have to finish as quickly as possible because Britain is about to join the war and then all digging will cease. There is an RAF base nearby. Planes fly overhead and remind us of the imminent threat, and lack of time. A plane crashes nearby and a pilot dies.

I loved the use of subtle conflict in fiction throughout this quiet, gentle film. There isn’t even a bout of fisticuffs. At most there is a firm command or slightly raised voice. It is all very British, but it is never slow or boring. I hope this will help you when it comes to adding conflict to your story without having to resort to bombs and car chases. Look out for the next post: The Craft Of Not-So-Subtle Conflict In Fiction