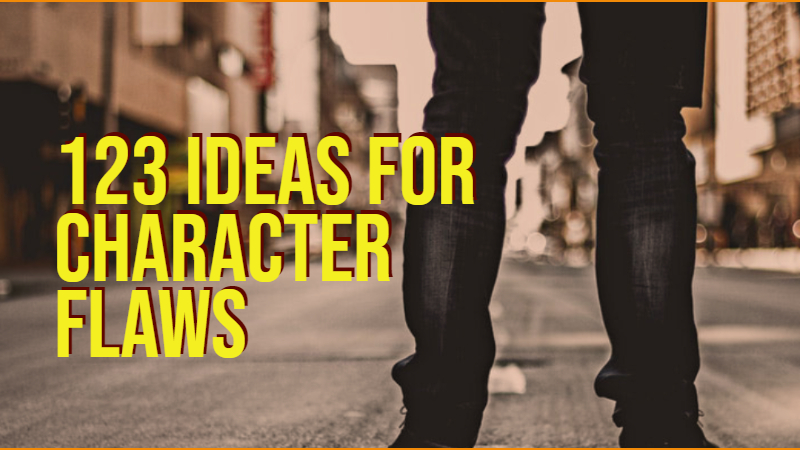 Use this post to explore 123 ideas for character flaws. Use them for the characters in your books.

Pay special attention to creating the four main characters in your novels. Great characters have good and bad traits. They also have character flaws. Be sure to include the flaws when you complete the character questionnaires for your fictional creations.

What Is A Character Flaw?

According to Oxford English Dictionaries, a character flaw is ‘a fault or weakness in a person’s character’.

A character flaw can be defined more fully as an undesirable quality in a person. It is an imperfection, limitation, deficiency, phobia, or a problem that affects the way others perceive us. These character flaws are present in everybody.

A flaw can be a problem if it affects the way a person interacts with others. A reckless person could endanger other people. A flaw can also simply make a character more three-dimensional and empathetic. We relate to people who are not perfect.

‘In general, character flaws can be categorised as minor, major, or tragic.

We can use a flaw to help us plot a book. Look at the examples below.

Examples Of Character Flaws In Fiction

Use this list (From Dark World RPG via The Character Therapist) of character flaws to help you created rounded characters when you write your novels and stories. We have added a few of our own choices at the end of the list.

Plus A Few More

Seven Of The Most Destructive Flaws

Some of the most destructive character flaws are included in the illustration below. They are described as flaws with a “dominant negative attitude — a defensive and potentially destructive pattern of thinking, feeling and acting. We could also call it a constraining factor or personal stumbling block.”

We suggest you use these when you’re plotting the downfall of your characters or creating potential areas of conflict.