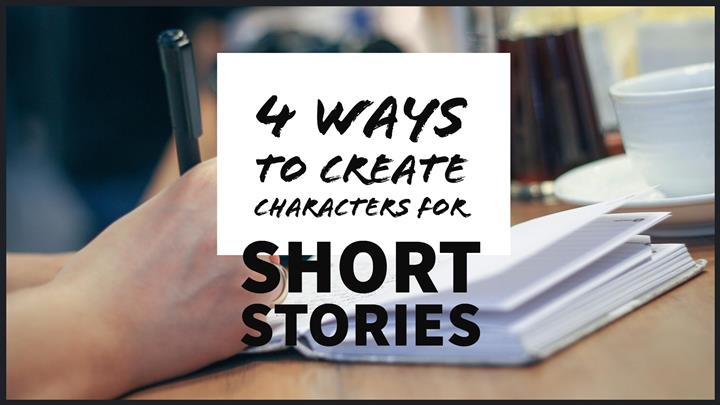 In this post, we cover 4 super easy ways to create characters for short stories.

How can we work with a reduced count and still have a fully developed character?

Sometimes we only need one line to summarise a character. Find a way to describe them that creates an image for the reader of who they are.

‘At first glance Jack seemed fair enough, with his curly hair and quick laugh, but for a small man he carried some weight in the haunch and his smile disclosed buckteeth, not pronounced enough to let him eat popcorn out of the neck of a jug, but noticeable.’
~Brokeback Mountain – Annie Prouxl

Dialogue is important. How does your character talk? Vocabulary, sentence structure and how they talk all help us to show character.

Do they use the words “Say what?” or “Excuse me?” or “What you on about?” or “Can you please say that again?” or “I beg your pardon?” Each phrase creates a different character.

The age, level of education and nationality will all influence how your character speaks.

“It’ll be the same as it always is,” I said. “After an hour you’ll be off somewhere snogging the prettiest girl at the party, and I’ll be in the kitchen listening to somebody’s mum going on about politics or poetry or something.”
How to talk to girls at parties – Neil Gaiman

It wasn’t his habit, he’d told her, to strike up conversations with “random” people.
“Why not?” she’d asked.
And he’d said, with a look that suggested that her question was virtually incomprehensible, “Why not? Because I’ll never see them again.”
With her provocative little laugh, the woman had said, “But that’s the best reason for talking to strangers—you’ll never see them again.”
Mastiff – Joyce Carol Oates

There is a funny lady with a big hat waving at us. She has sunglasses all over her face. “Daddy, who’s that?”
“It’s my new friend. She is going to the beach with us.” Daddy pulls on my arm, but I’m not going closer.
“I don’t want to go to the beach with her. It’s supposed to be our day.”
Daddy stops and talks close to my face. “Well, she is coming with us and I ‘d like you to be very well-behaved. She is a very special friend.”
“I want Mommy.” He holds me tight like he used to, every day.
“But you are spending the weekend with Daddy, remember? And we’re going for ice-cream.”
“I like ice-cream.” I giggle when he tickles me.
“Maybe she likes ice-cream too.”
“Maybe.” I don’t feel like ice-cream anymore, but I follow Daddy.

Make your characters move. Use body language. This conveys a lot about them. Make sure to use strong verbs.

A big slow sweet-faced boy with these big hands and feet, thighs like hams. A shy gentle boy with good manners and a hushed voice.
He wasn’t simpleminded exactly, like the others in that class. He was watchful, he held back.
Heat – Joyce Carol Oates

In other respects, she was not a particularly nervous woman, but the mere thought of being late on occasions like these would throw her into such a state of nerves that she would begin to twitch. It was nothing much–just a tiny vellicating muscle in the corner of the left eye, like a secret wink–but the annoying thing was that it refused to disappear until an hour or so after the train or plane or whatever it was had been safely caught.
The way up to heaven – Roald Dahl.

Cheryl strode down the passage and flung open the door. Twelve identical suits turned towards her, the blush was unanimous. Gerald, blinded by the projector with his laser pointer in-hand, worked his jaw, slack and fish-like, in an attempt to salvage his board meeting.
“Please don’t stop on my behalf.” She said as she slid into her seat at the head of the table. Pretending not to notice as Gerald’s clutter hit the floor.

Internal thoughts are still one of the simplest ways of showing character. Once you are in the mind of a character you can share their motivation, thought processes and backstory.

Oh, she hated math class! Hated this place! Sitting at her desk in the row by the windows, at the front of the classroom, made Lisette feel like she was at the edge of a bright-lit room looking in—like she wasn’t a part of the class.
ID – Joyce Carol Oates

On the shelf where caps and scarves were thrown, I found a bag with some figs and dates in it. Somebody must have stolen them and stashed them here to take home. All of a sudden, I was hungry. Nothing to eat since morning, except for a dry cheese sandwich on the Ontario Northland. I considered the ethics of stealing from a thief. But the figs would catch in my teeth and betray me.
Amundsen – Alice Munro

I’m done. It’s over. I am not taking this anymore. Who does he think he is? I reach for the big black suitcase and start folding. Shirts. Shorts. Underwear. Careful little parcels of hope and freedom. I hear the garage door open, stuff the whole lot back in to the closet, and hurry to fix his dinner.

By using a combination of these methods, you’ll be able to convey as much of your character as possible using the least number of words.

Tip: Don’t forget to apply to principles of ‘show, don’t tell’ to really pack a punch.

Top Tip: Use our Character Creation Kit to create great characters for your stories. If you want to learn how to write a short story, sign up for our online course.