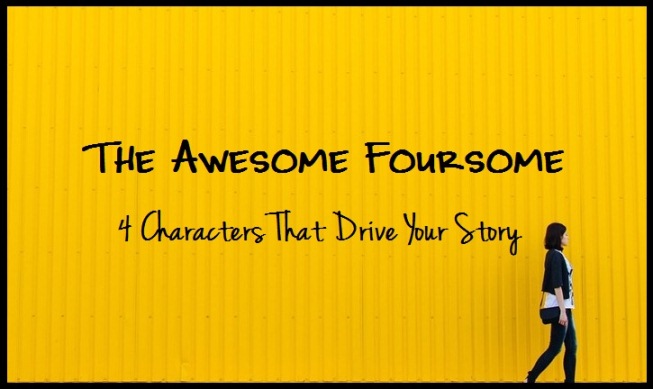 Writers Write is a writing resource and we have written this post on the awesome foursome fictional characters to help you write a book.

Great plots are awesome. Beautiful descriptions are awe-inspiring. But if you can crack the awesome foursome fictional characters, you are made.

If you have a great plot, it’s a good start, but that plot has to happen to someone. That someone must have somebody else trying to stop them. That someone should also have a friend to help them and, of course, the moment they know what they want, they meet the love of their life. And that love has nothing to do with what they want.

In this paragraph I have mentioned four character-types. They are:

But I thought the other character did that?

Don’t get caught up by the names of these characters. In my years of research, I have found hundreds of versions or different kinds of characters. When you examine them, they overlap and are interchangeable. I want you to pay close attention to why a certain character is in the story. What are they doing? Why have you, as the writer, put them there?

There will be more people in your story and I will discuss them in the following weeks. What I want you to do is make sure your story is strong enough with these four characters before you add more. It’ll also stop you from adding a million characters to prop up your plot. By limiting the number of characters, it forces you to strengthen your plot.

Remember, these are general guidelines. Right at the end when we lose Darth is he really still so evil? It is all about change and it is up to you to manipulate the characters.

Keep in mind we can have stories with dual protagonists or dual timelines which can also alter the set up. But keep it simple. Keep it plain. Strengthen your plot first.

Figure out your awesome foursome and then decide who else you need.